Bhagwat had in the past too insisted that the temple be built without delay, but he had so far desisted from asking the government to take the legislative route to overcome the hurdles 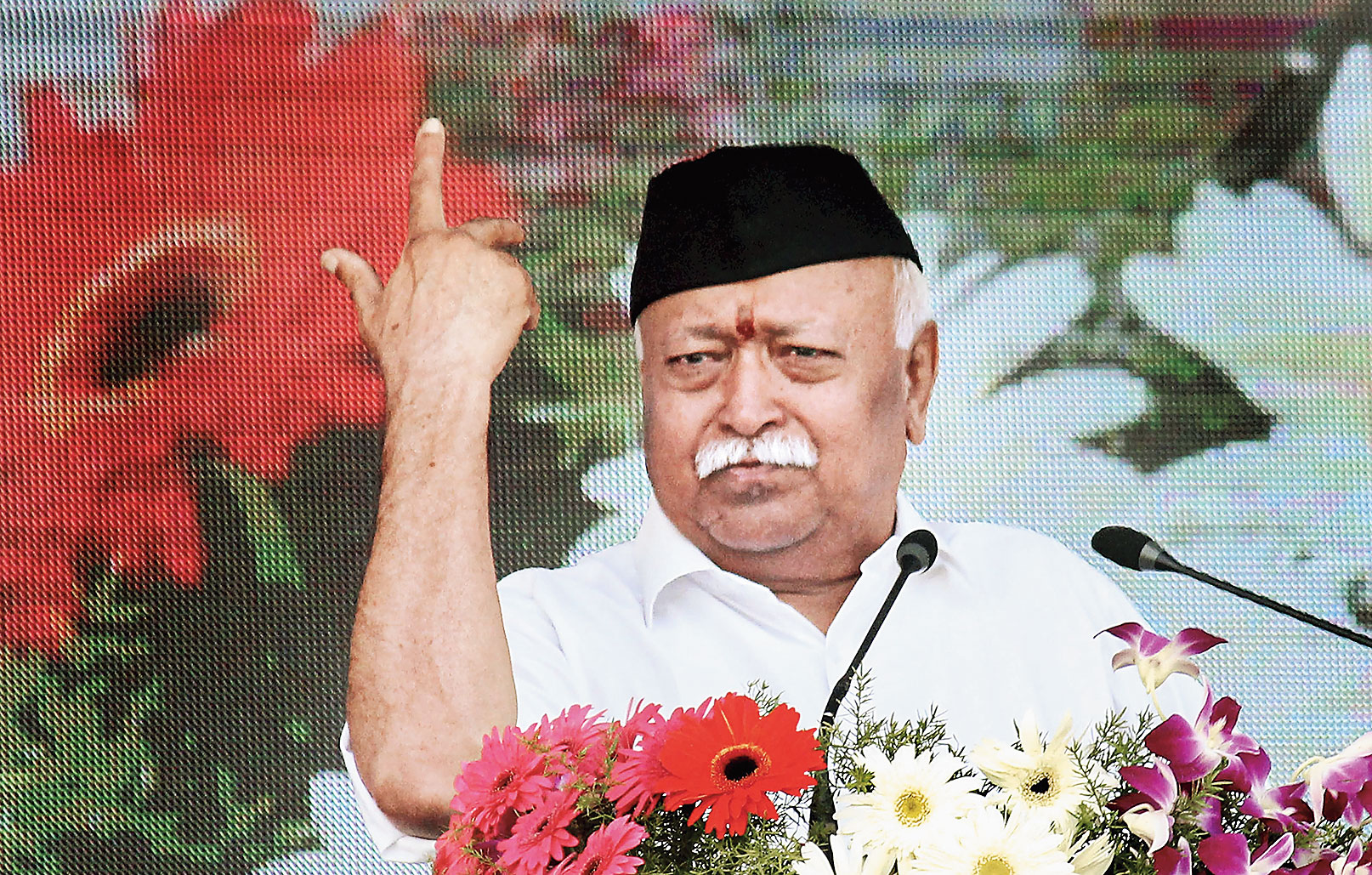 Rashtriya Swayamsevak Sangh chief Mohan Bhagwat on Thursday unambiguously urged the Narendra Modi government to bring in a law to ensure the construction of a Ram temple at the disputed site in Ayodhya.

“It is in nobody’s interest to test society’s patience without reason. Building the temple is necessary for self-esteem; it will also pave the way for an atmosphere of goodwill and oneness,” Bhagwat said in his annual Vijaya Dashami speech in Nagpur.

“This matter of national interest is being obstructed by some fundamentalist elements and forces that play communal politics for selfish gains. Despite such machinations, the decision on the ownership of the land should be speeded up, and the government should clear the way for the construction of the grand temple through an appropriate law.”

Bhagwat had in the past too insisted that the temple be built without delay, but he had so far desisted from asking the government to take the legislative route to overcome the hurdles. The land dispute is before the Supreme Court.

At his three-day series of lectures at Vigyan Bhavan last month, Bhagwat had said: “As a Sangh worker, head of the Sangh and as a part of the Ram Janmabhoomi movement, I want a grand Ram temple constructed at the earliest at his birthplace.”

He had added: “It should have happened by now. But it is better to find a solution through dialogue. If the government asks us, we will express our views. I don’t know whether an ordinance on the temple can be promulgated.”

On Thursday, he was categorical. “The Sangh has been associated with the sentiments of crores of our countrymen in the efforts to build a magnificent Ram temple at the birthplace of Shri Ram,” he said.

“(Ram’s) birthplace is yet to be allocated for the construction of the temple although all kinds of evidence have affirmed that there was a temple at that place. Some elements have an obvious game plan to stall the judgment by presenting various new interventions.”

The BJP and the Congress had not reacted by Thursday evening. The Congress has been stressing that the matter is sub judice and urging all sides to accept the Supreme Court’s verdict. The party has criticised the Sangh-BJP for raising the subject before every major election.

Bhagwat said the Supreme Court’s objective in the Sabarimala temple case — gender equality — was noble but such reforms cannot be achieved without evolving a consensus. The Supreme Court has quashed a ban on women in the “menstrual age” (10 to 50 years) entering the temple.

“Man-woman equality is fine but people who have faith and have followed a tradition for hundreds of years can’t be forced to change just like that,” Bhagwat said.

“Tradition is not without basis. Religious heads should have been consulted. Reforms are done through persuasion. Even a child does not listen if you use force.”

Although Bhagwat repeated the standard disclaimer about the Sangh not having anything to do with politics, he delivered a sermon on the upcoming parliamentary elections.

“Who should lead the nation? Are the current policies right or wrong? The decisions we make on that single day every five years force us to live with the good and bad effects in the short term as well as the long... sometimes throughout our lifetime,” he said.

“We are left with nothing else in our hand after that single day (of voting). If we have to get a verdict that will not lead to repentance, the voters must rise above self, parochial feelings and the petty egos of caste, language and provincial affiliations, keeping it in mind that the national interest is supreme.”

He added: “The voters will have to ponder dispassionately on the sincerity and capability of the candidate, the commitment of the party to issues of national interest and integrity, and the past and present actions of the candidate and party.”

Bhagwat advised disgruntled voters against exercising the Nota (none of the above) option, arguing it helped undeserving candidates.

He stressed the need for uniting Hindu society. “The Sangh wants to establish a strong, invincible, organised Hindu society and will comprehensively achieve this goal,” he said.

“Those sections of society that consider themselves ‘separate’ because of their religion, tradition and lifestyle or are apprehensive of the word ‘Hindu’ need to understand that Hindutva is the eternal ethos of this country. While its core values remain unchanged, its content and conduct have changed with the times and will continue to do so....”

Bhagwat stressed the need for self-reliance in arms production, asking for the acquisition of technology from developed nations instead of always buying arms from them.

He asked everybody to abide by the law and the Constitution and work for unity and harmony in society.