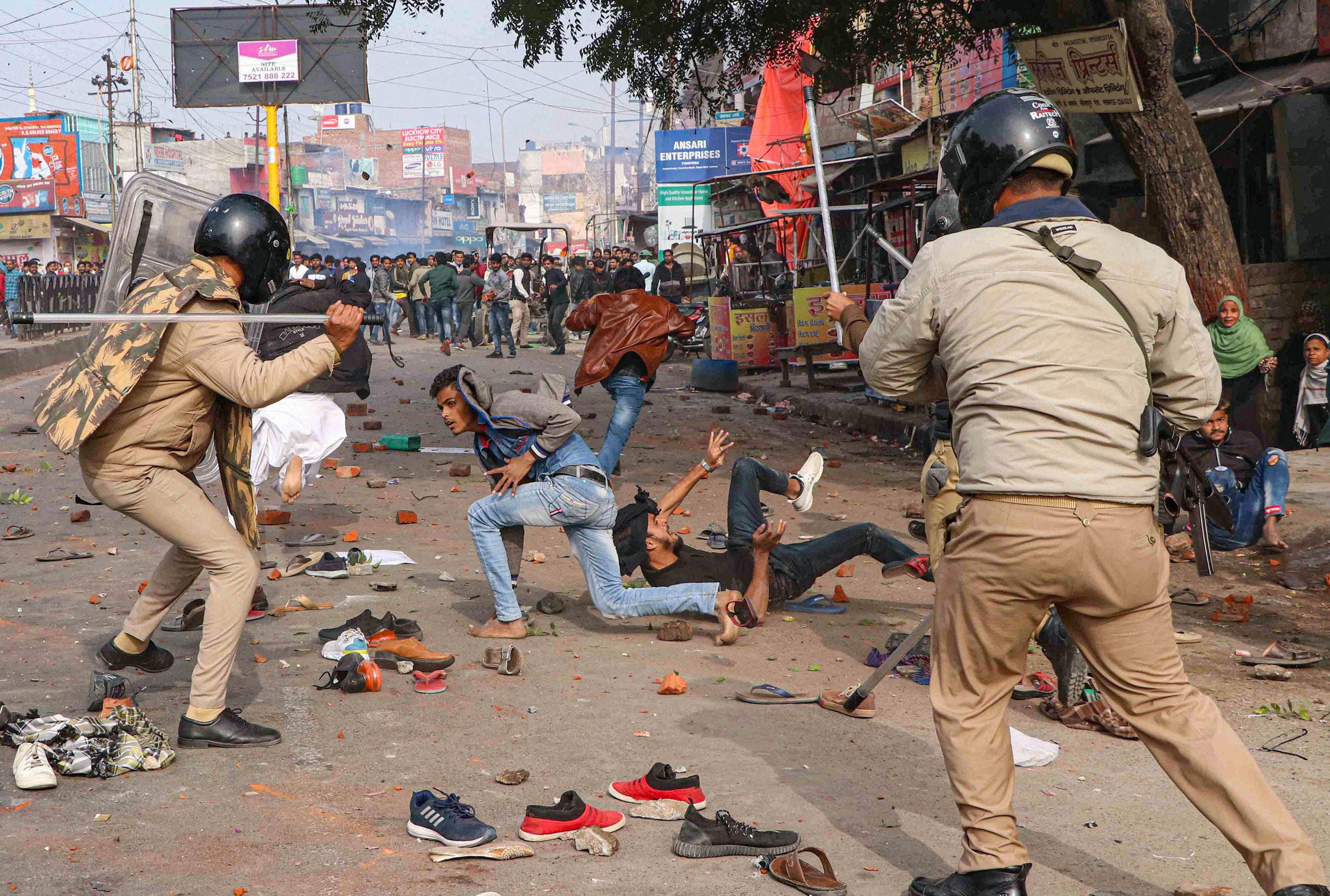 Police personnel hit protestors during a rally against the NRC and the amended Citizenship Act in Lucknow on Thursday.
(PTI)
Our Special Correspondent   |   New Delhi   |   Published 26.12.19, 08:31 PM

A fact-finding report published by a team of rights activists has accused Uttar Pradesh police of unleashing a “reign of terror” in the state, torturing the anti-citizenship law protesters and framing Muslims in cases of violence.

Yogendra Yadav, Kavita Krishnan and Riad Azam, who were part of the team, held a news conference here on Thursday where they alleged the Yogi Adityanath government was using “unlawful and lethal tactics” to harass peaceful protesters.

Adityanath had been quoted in the media as threatening the protesters with “revenge”.

The report cites district-wise statistics and testimonies from families, and accuses the state’s BJP government of brazenly targeting Muslims and social activists.

“The report clearly shows that the government is guilty of unlawful arrests, destruction of property, intimidation, the stifling of free speech and peaceful protests, and custody torture among others,” Yadav said as he made the report public at the Press Club of India.

“A reign of terror is prevailing in Uttar Pradesh,” he added.

The team had visited Meerut, where protesters have died.

Yadav accused the police of framing Muslim youths in false cases to be able to crack down on the community.

Rights activist Harsh Mander, who was present at the news conference, said the government could use the details gathered during the upcoming National Population Register update to mark people down as “doubtful citizens”, to be later targeted during the National Register of Citizens exercise.

He accused the Narendra Modi government of spreading blatant lies on the NRC and the NPR to carry forward its divisive agenda.

“Will Modi listen to the youth of India and introspect? The NPR-NRC will happen later but Muslims have already been stripped of their basic right to protest.”

According to the report: “The worst thing that has happened in Meerut is that poor, underprivileged (people) have been killed and on top of that, cases have been filed against those who died. These people were mostly breadwinners of their families. No FIR is being accepted by the police on behalf of the family members of the deceased.”

It adds: “The situation in the Muslim neighbourhoods remains tense and the people are tense. They anticipate more raids by police, hence the male members stay awake all night guarding their homes. There is an urgent need to provide both legal help (and) financial help to these families.”

The report asks the state government stop its attacks on the protesters, release the innocent detainees and quash the FIRs against anonymous people.

It recommends a special investigation team probe under the Supreme Court’s supervision and the suspension of the police officers accused of atrocities.

Uttar Pradesh police have arrested more than 1,100 people and kept over 5,000 in preventive detention following violence related to protests against the Citizenship (Amendment) Act, PTI quoted officials as saying on Thursday. They put the death toll in police clashes across the state at 19.