The saffron party had called a bandh to protest the state government's August 9 guideline on festivals, which spoke in favour of in-door like puja and capped the size of the idols to 4 feet 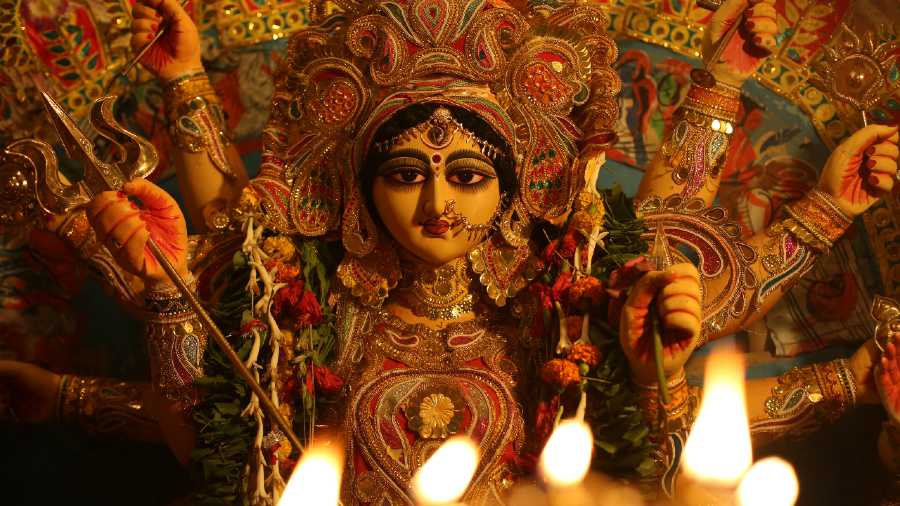 Odisha government's August 9 guideline on festivals where the restrictions have been imposed to keep the height of the Durga idols within four feet
Shutterstock
Our Bureau, PTI   |   Cuttack   |   Published 13.09.21, 05:11 PM

BJP leaders and supporters staged picketing in different areas of the millennium city on Monday wearing raincoats and holding placards to press for their demand to relax the restriction on the height of the Durga idols during the 12-hour Cuttack bandh called by the party.

The saffron party had called the bandh to protest the state government's August 9 guideline on festivals where the restrictions have been imposed to keep the height of the Durga idols within four feet and conduct in-door like puja in different pandals across the state.

The restrictions were imposed keeping in view the prevailing COVID-19 situation in the state.

Most of the shops, commercial establishments, educational institutions remained closed due to deep depression induced heavy rainfall. As most parts of the state's commercial hub was waterlogged, people preferred to remain indoors.

A large number supporters of the saffron party wearing raincoats picketed at the Badambadi Bus terminal and other places and courted arrest.

"The bandh was successful. The people on their own supported the bandh call as it was organized as a mark of pride for the Cuttack city," said BJP Mananagar president Lalatendu Badu.

The state government's recent denial of the relaxation on the height of the Durga Puja idols, has also sparked a political slugfest in the state. While the ruling BJD is divided over the issue, the Opposition BJP and Congress have thrown their weight behind the people who are demanding withdrawal of the restrictions.

The row over the Durga idol size has its impact on the ruling BJD too. Cuttack's six-time BJD MP Bhartuhari Mahtab while attending a puja committee meeting in Cuttack, wondered how the government can avoid spread of the infection if the height is limited within 4 feet.

"I do not see any reason behind the argument that raising the idol size by another 2 or 2.5 feet will help spread the infection. It's laughable," the veteran Parliamentarian, said.

However, senior BJD leader and former MLA Debashis Samantray ridiculed Mahtab and said: "Where was the MP all along with the issue is being debated since a long time? He was not seen anywhere. But suddenly he attended a meeting and kept his views. The decision is taken for the entire state and not alone for Cuttack in view of the pandemic."

Incidentally, when the Chief Secretary and special relief commissioner (SRC) held discussion with the puja committees of Cuttack on September 7, all the local BJD MLAs and ex-MLAs were invited, barring Mahtab, a sitting MP, sources said.

Barabati-Cuttack Congress MLA Mohammad Moqim also demanded withdrawal of the restriction on the height of the idols.

"This is unfortunate that the chief secretary and the SRC did not take any decision on the September 7 meeting and sought two day's time. Later, the government upheld the earlier guidelines without reconsidering the plea of the puja committees," he said.

Balu Bazaar Puja Committee, one of the oldest committees organizing the Durga Puja, has planned to move the Orissa High Court challenging the restrictions of the state government.

"We have been worshipping the 8 feet height Durga idol since 1914 and it is not possible to change the tradition," said its president Suryakant Sanganeria.