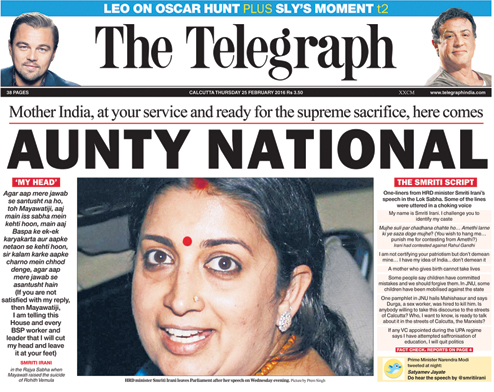 This newspaper had headlined a lead report - on Irani's Lok Sabha reply to the Rohith Vemula suicide controversy and the JNU student eruption -"Aunty National" on February 25, 2016. It was a headline Irani was to mock during a Rajya Sabha speech.

The 1,098-word post was triggered by her Twitter spat with Bihar education minister Ashok Choudhary earlier this week after he addressed her as "Dear" and Irani reminded him that her communications start with " adarniya (respected)".

Irani's post reads like the push-button autobiography of a person who revelled in challenges and rose up life's rungs fighting them off.

Of her middle class - "Lutyens Delhi excluded" - upbringing, Irani says: "Many girls who would walk to school/college and back home everyday.... would often be told if accosted by a boy or a bunch of them, don't look up and keep walking straight. ... But there would be those rebellious kinds (yours truly included), who would question why? Why not respond? Why zip it?"

Her route to becoming a "TV star", the minister describes thus: "But while you still struggle to make a mark you are advised that if you go to parties and mingle enough, you shall get work. You stoutly refuse as you believe that your talent and hard work are the only precursors to success....

"You are scoffed at and brushed off as naïve. But lo and behold, you do succeed. You bag all the awards that matter, TRPs soar through the roof and all the naysayers grudgingly accept that you have arrived...."

Politics "happened", Irani writes, "not when you are a fading star, not when you are unemployed but when you are at the peak of your success. You are given the hard battles to fight, you accept (Chandini Chowk & Amethi were no cakewalk my friends).... You become possibly the youngest ever woman to be nominated to the Rajya Sabha.... Yet some "intellectual" says " anpad" the minute you are given the opportunity to serve as HRD Minister...."

That said, the HRD minister went on to list an inventory of "firsts" she had scored in her current job.

For its online edition, Basant Kumar Mohanty of The Telegraph has done an audit on the Irani achievements, many of them funded by a cess the taxpayer pays. Several points on Irani's list are not efforts at enhancing academic excellence but welfare measures attached to education.

The minister's statements are being reproduced verbatim, including the word "check".

Claim: Over 4 lakh 17 thousand school toilets made in one year - check

Fact check: It is true that these many toilets have been set up. But the process of building toilets was taken up by the government after the Right To Education (RTE) Act notified in 2010 said the schools have to have separate toilets for boys and girls.

Fact check: The NCERT books were available free online earlier too. But they were available in PDF format and were not automatically adjusted to mobile screen. It could not be accessed on mobile phone. But under the e-Pathshala, the pages are responsive to mobile phones and have a wider reach because of the spread of mobile phones, NCERT sources said.

Fact check: It is true that the scheme was launched June last year under which parents would get information about their children on their attendance, performance, health challenges and the entire academic record from Classes I to XII. But some niggles remain. Chandrakant Sahoo, whose daughter is a student in a Kendriya Vidyalaya in Bhubaneswar, said he and his wife never got any text message about the attendance or performance of their child.

Fact check: The CBSE launched this online facility last November. But a school principal in Delhi said the board was yet to popularise the scheme and many students do not know about it.

Fact check: Launched last November, Shaala Siddhi aims to enable the school to evaluate their performance in terms of academic and non-academic areas.

Claim: First time ever, a mentoring and scholarship program to send our girls to technical institutes - UDAAN --- check

Fact check: Udaan was launched in November 2014 and it is a popular scheme.

Claim: First time ever, 10,000 undergraduate scholarships and exposure visits for students from the Northeast under Ishan Uday and Ishan Vikas --- check

Fact check: It is true that Rashtriya Avishkar Abhiyan was launched in July last year. But it is not the first-of-its-kind scheme to encourage scientific tempter among students. The NCERT has been conducting science exhibitions every year for the past 50 years to encourage students develop innovative science-based models and exhibit them.

Claim: First time ever, the UGC Prevention, Prohibition and Redressal of Sexual Harassment of Women Employees and Students in HEIs to protect women employees and students --check

Fact check: It is true that the UGC last month issued a regulation on checking harassment of women employees at workplace. However, many institutions had their own mechanism to deal with such cases. For example, JNU has a gender sensitisation committee against sexual harassment since 1999 after the Vishaka judgment that wanted every institute to deal with sexual harassment cases.

Fact check: A multilingual knowledge portal has been launched last month. The government's mission is to showcase Indian culture and heritage to the world through the medium of technology.

Claim: First time ever, collaborated effort to focus research on the development goal posts of the country - IMPRINT -- check

Fact check: IMPRINT is a newly launched initiative by the IITs and IISc Bangalore to provide solutions to 10 technology domains relevant to India. Premier institutions like IITs have been doing research on socially relevant issues since their inception.

Fact check: The second meeting of Saarc education ministers was held in New Delhi in October 2014 where a New Delhi declaration on education was adopted agreeing to expand the scope of cooperation.

Fact check: The HRD minister did unveil the statue of Aryabhata in April this year. Earlier in 2009, the statue of spiritual leader Sri Aurobindo was unveiled at the Unesco headquarters.

Fact check: A former IIT director said the fee waiver for economically weaker sections was not new. About 25 per cent students from economically weaker sections were getting a fee waiver. But the modalities have been changed. Earlier, the IITs were giving the waiver to students with family income of less than Rs 2 lakh per annum. From the coming admission season, this will be reduced to Rs 1 lakh. However, students with parental income between Rs 1 lakh and Rs 5 lakh will get a two-thirds waiver.

Fact check: This particular collaboration is for the first time. But the IITs have entered into MoUs with about a hundred global universities this year for research and academic collaborations.

Fact check: The Global Initiative for Academic Networks (GIAN) has been started to facilitate partnerships between higher education institutions of India with those around the world. Academicians from across the world are invited to take some courses in Indian institutions. Till last month, 1,236 proposals have been made by the foreign faculty from 58 countries. Of them, 478 courses have been sanctioned.

Fact check: Skills Assessment Matrix for Vocational Advancement of Youth (SAMVAY), an initiative to recognise skills and education as part of an integrated learning system, was launched in November 2014.

Claim: First time ever, a grassroots based consultation on developing a national policy, including over 2 lakh village education committees -- check.

Fact check: Unlike earlier policies, the present exercise on policy has gone through wider consultations.