Putting together some of what also goes into the upkeep of the highest office in the land, if only as a footnote to how President Kovind chose to describe his monthly earnings from the public exchequer 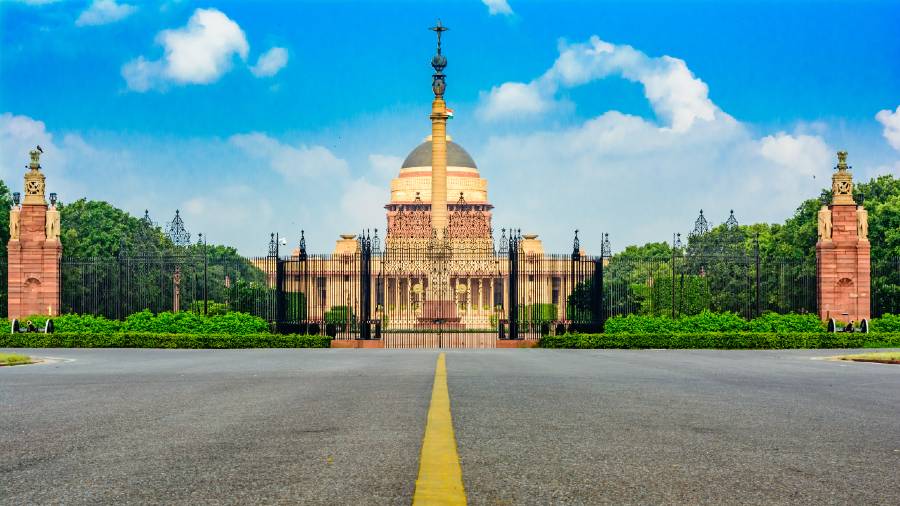 Sarojini Naidu is widely believed to have once remarked to Mahatma Gandhi if he knew how much it cost each day to keep him in poverty. Last week, President Ram Nath Kovind became the first occupant of Rashtrapati Bhavan to publicly expound on his frugal salary. “If the President is the nation’s highest paid  employee, he also pays taxes… there is no harm in saying this… everybody says you get (Rs) five lakh as salary but I pay taxes too. (Rs) 2.75 lakh goes in taxes. What’s left? And what’s left… well our officers and teachers seated here get more than that…” he said at a brief function on Jhinjhak railway station close to his native village near Kanpur. Putting together some of what also goes into the upkeep of the highest office in the land, if only as a footnote to how President Kovind chose to describe his monthly earnings from the public exchequer.

It occupies 330 acres atop Delhi’s Raisina Hill and has in excess of 300 rooms spanning four flanks of the H-shaped centrepiece called the Rashtrapati Bhavan. It has a colonnaded step-down forecourt for ceremonials watched over by the slender obelisk of the 145-foot Jaipur Column. There are elaborate side courts, some of them now used as parking areas for invited guests. An expanse larger than the Palace of Versailles, the estate is littered with some of the finest colonial bungalows much in demand with Delhi’s power elite. When he was deputy prime minister in the short-lived Chandrashekar government, Devi Lal used to occupy one such manor house on the western fringe of the property.

More than 300 personnel man the Presidential secretariat. These include a senior secretary as head of multiple administrative wings, five aides-de-camp drawn from the armed forces, protocol and press officers, doctors and a chief chef. The top rung are often deputed from the IAS or IFS, but Presidents are also known to have picked lateral appointees to key posts. Quite apart from those, there’s the fancied 86-strong Presidential Bodyguard squad, one of the oldest cavalry divisions of the army. It is cadred by a handpicked soldiery that rides out on an appointed stable of bay horses. Monthly staff salaries tally at more than Rs 1.5 crore; annual Rashtrapati Bhavan staff allowances are budgeted at Rs 66 crore. None of these includes Delhi Police ranks deputed to duties in and around Rashtrapati Bhavan.

A classic 19th century timber chalet near Mashobra in Shimla as summer house and a winter getaway called Rashtrapati Nilayam in Hyderabad. Both properties are islanded in lawns and flower gardens, both retain permanent and contractual staff for upkeep and attendance. Conservative estimates put the annual staffing and maintenance costs for the two properties at well above Rs 1 crore. The Mashobra chalet looms a thousand feet above the Shimla ridge and is built almost entirely with woven woodwork in the dhajji style. The Hyderabad Nilayam is a 90-acre affair with 11 private rooms and facilities to accommodate 150 guests.

The Rashtrapati Bhavan is moated in 190 acres of gardens which require looking after 365 days a year. Among the more famed ones are the Mughal Gardens, briefly thrown open to the public each year, and a herbarium. There is also a music garden and an open area especially for meditation. Two score and more gardeners make up the apparatchik of this enterprise. But in the months between October and February, the number can swell up many times over as that’s the season for laying out and seeding the flowerbeds afresh. Among their jobs also is to feed a pen of spotted deer and, when required, employ langurs to scare away rampaging rhesus hordes, endemic to central Delhi. Dozens of fountains spout across these gardens; there are also, dotted about, the interruptions of swimming pools, tennis courts, a polo ground and a golf course. Within the Presidential quarters perhaps the most splendoured part are the Durbar Hall and the Ashoka Hall, stage to swearings-in and investitures, official banquets and the occasional soiree. A two-tonne chandelier hangs down the ornately wrought ceilings. The Durbar Hall is abutted by a ballroom, often used as ante-room for private conversations by attending VVIPs.

The Presidential garages hold dozens of vehicles of all make and manner. Until a few years ago, the Rashtrapati would ride out to witness the Republic Day parade in an open four-wheel four-horse carriage of imperial vintage; drawn by horses, it is still occasionally used for arrivals and departures at the Beating Retreat ceremonies. But the routine presidential ride is now a stretch Mercedes Benz Pullman Guard limousine, S600 class. It is especially armour-plated and bullet-proofed; it costs Rs 10 crore on the market.

When trains are required — as recently when the President travelled to Kanpur — a luxury saloon is fitted out. There used to be a saloon carriage exclusively kitted and kept in a shunting yard of the railway station for presidential use. It had a vintage two-coach carriage but was declared unserviceable in 2016 and was later de-commissioned.

Long-distance air travel has remained banished since the pandemic arrived, but last November the President boarded a brand new custom built Boeing 777 aircraft for a visit to Chennai. The retrofitted state-of-the-art aircraft — it has inbuilt missile defence systems and self-protection suites in addition to sleeping chambers and workstations — came at an approximate cost of Rs 4,200 crore. (The purchase came with an identically purposed aircraft for the Prime Minister; the total deal was invoiced at an estimated Rs 8,400 crore.)

The nation affords outgoing Presidents a range of lifelong amenities which include an elaborate security detail, free and furnished housing — usually in a scouted and refurbished Lutyens bungalow — and a secretarial staff. Cars and telephony also come with no bills attached. They have access to free medical attention and free of cost top-tier journeys to domestic destinations of choice in the company of one other person. They are also entitled a monthly pension payout of 50 per cent of their last drawn salary which, admittedly, would be far lighter than the packet President Kovind said he currently gets in hand as our First Citizen.