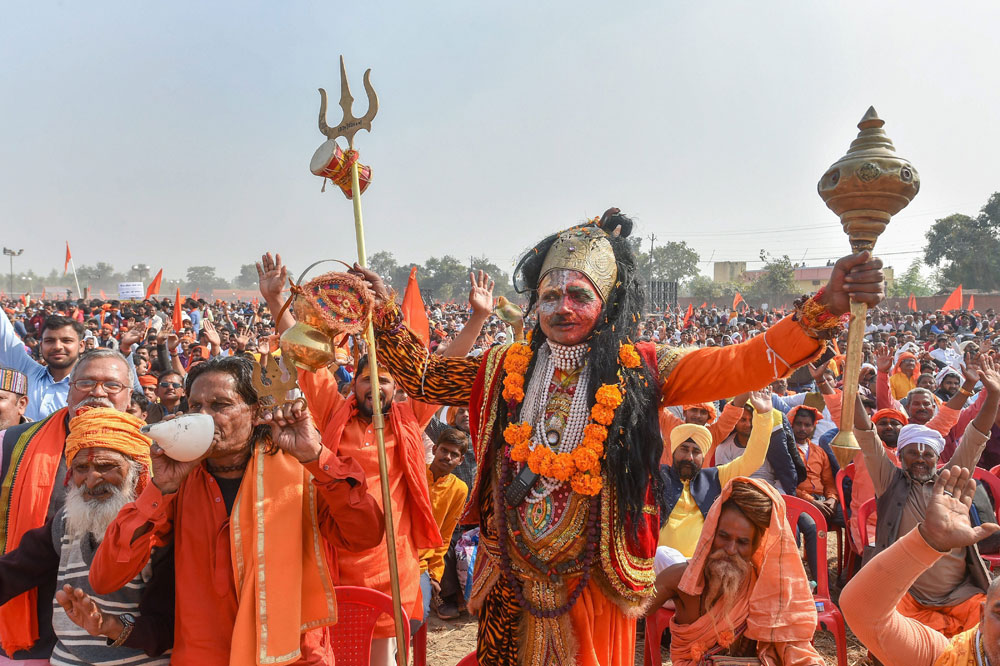 The `Dharam Sabha’ organised by the Vishwa Hindu Parishad is pushing for the construction of the Ram temple in Ayodhya
(PTI)
Piyush Srivastava   |   Ayodhya   |   Published 26.11.18, 10:53 PM

In Ayodhya, Mahant Paramahans Das Maharaj, a sadhu, slammed Sunday’s Dharm Sabha the VHP had organised to press its demand for a Ram temple.

“A Dharm Sabha is organised for the betterment of the people. But speeches were given at the programme to provoke Hindus against their Muslim brothers and sisters. The sadhus made adverse remarks against our courts and the Constitution,” Paramahans, head of Ayodhya’s Tapasvi-Ji-Ki-Chhavani ashram, said.

Paramahans last week said he would light his pyre near his ashram and sit on it on December 6 if there is no concrete decision by then for the construction of a Ram temple at the disputed site in Ayodhya.

The Ayodhya dispute is pending in the top court, which would take up the case in January to fix a date for the hearing.

Mahant Satyendra Das, head priest of the makeshift Ram Lala (infant Ram) temple at the disputed site, said most senior sadhus had distanced themselves from the VHP event.

“The shankaracharyas refused to attend it. Any Dharm Sabha is incomplete without the participation of true religious leaders. It was only a political rally,” Satyendra Das said.

Hundreds of apolitical sadhus gathered in Varanasi for a three-day religious parliament have accused the Narendra Modi government and Uttar Pradesh chief minister Yogi Adityanath of “insulting” Ram amid talk that the BJP-ruled heartland state was planning a 221-metre-high statue of the legendary king.

The censure coincided with criticism — also by a sadhu — that Sunday’s Vishwa Hindu Parishad-organised Dharm Sabha in Ayodhya was more of an adharm sabha (unholy meet) because of the adverse remarks against courts and the Constitution.

Most of the speakers on Sunday had appeared angry with the Supreme Court for not speeding up the Ayodhya case.

In Varanasi, the anger of the apolitical sadhus was directed at what they felt was an attempt to put Ram in competition with Sardar Vallabhbhai Patel, independent India’s first home minister and the man credited with getting reluctant princely states to join the union.

“The 221-metre-high statue of Lord Ram would be an insult to the god. Birds and animals would move around the open statue and Hindus wouldn’t be able to offer prayers at such a place. An idol of the god can be kept only in a temple covered from all sides,” Swami Avimukteshwaranand

Saraswati, a well-known sadhu in Varanasi, said on Monday, the second day of the three-day Param Dharma Sansad, or great religious parliament.

The gathering has been convened by Swaroopanand Saraswati, the shankaracharya of Jyotir Math, one of the four institutions the Adi Shankara had founded.

“The BJP government is trying to put Lord Ram in competition with Sardar Vallabhbhai Patel,” Swaroopanand said. “Patel had united a few principalities but Ram is the master of the entire universe.”

The Modi government had recently installed a 182-metre-tall statue of Patel in Gujarat’s Narmada district. Adityanath had visited the spot early this month and later announced that he would install in Ayodhya a statue of Ram bigger than the effigy of Patel, the world’s tallest now.

Adityanath has not mentioned in public the height of the planned statue of Ram but one of his ministers did at a media conference on Monday.

“The statue of Lord Ram would be 221 metres high. This includes a 20-metre umbrella and a 50-metre pedestal,” energy minister Srikant Sharma, a spokesperson for the state government, said in Lucknow.

Swaroopanand said Ram was not a politician. “The Hindus don’t need his statue. We don’t know whether Adityanath understands the Hindu religion or not. He must quickly learn the basics of the religion to understand why his decision to install Ram’s statue is anti-Hindu,” the shankaracharya said in Varanasi, 200km south of Ayodhya.

Adityanath, who wears saffron, is the mahant of the Gorakhnath temple in Gorakhpur.

“The Modi and Yogi governments are trying to turn the Hindu religion into a communal force,” he added.

The sadhus assembled in Varanasi later passed a resolution against installing a statue of Ram.

“Since all the sadhus in the religious parliament have passed a resolution unanimously that such a huge statue of Lord Ram would be humiliating for the Hindu religion, we want Adityanath to cancel his plan,” Avimukteshwaranand said in his speech at Sirgovardhan on the outskirts of Varanasi.