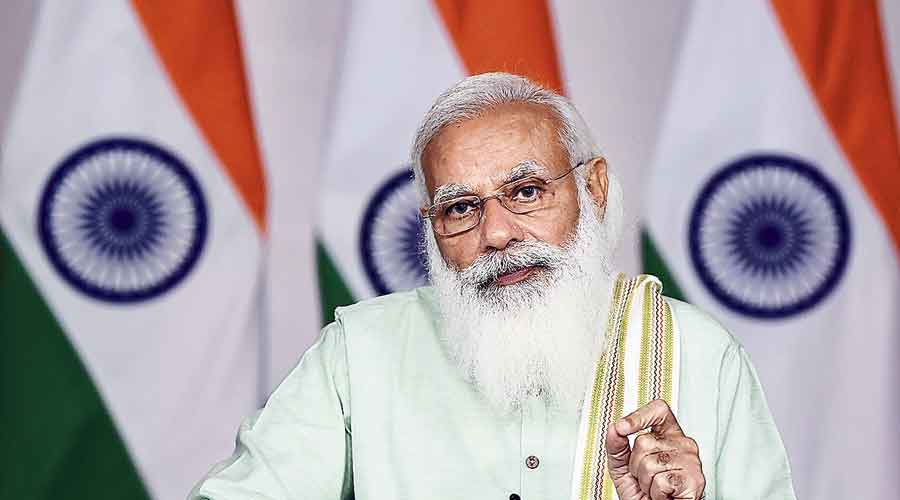 While many welcomed the renaming, several of them asked whether the Narendra Modi Stadium in Ahmedabad and the Arun Jaitley Stadium in Delhi would now be renamed after sportspersons too.

Some questioned the way Modi’s image dominated a congratulatory graphic put out by the BJP with Dhyan Chand pushed to a corner.

“Puzzle of the day: Find #MajorDhyanChand in the picture below,” a Twitter user posted.

The tweet by the BJP in which Modi overshadows Dhyan Chand.
The Telegraph

Social media influencer Dhruv Rathee, who lauded the renaming of the award, tweeted: “Now I hope they can rename Narendra Modi Stadium and Jaitley Stadium also. Remove all politician names.”

While the renaming decision is in line with the Modi administration’s knack for erasing the names of Nehru-Gandhi family Prime Ministers from government showpieces, its timing appears to have been carefully chosen.

The move comes a day after the Indian men’s hockey team won bronze at Tokyo — the country’s first Olympic hockey medal in 41 years — refocusing national spotlight on the game.

Modi said the decision had come under public pressure. “I have been getting many requests from citizens across India to name the Khel Ratna Award after Major Dhyan Chand. I thank them for their views,” he tweeted in the afternoon, without naming Rajiv Gandhi.

Union ministers and BJP politicians rushed to laud the decision, with cricketer turned parliamentarian Gautam Gambhir telling reporters: “Awards for sportspersons should be named after sportspersons.”

Fact-checking portal Boomlive reported that some ministers and news outlets shared the image of the Param Vir Chakra, the highest wartime gallantry award, as that of the Khel Ratna Award.

Modi had come under fire when the world’s largest cricket stadium, in Gujarat, was renamed as the Narendra Modi Stadium last February after a refurbishment. The stadium was originally named after the country’s first home minister, Vallabhbhai Patel. The BJP had justified the renaming on the ground that the Modi stadium was only a part of the larger Sardar Vallabhbhai Patel Sports Enclave.

In 2019, Delhi’s Feroz Shah Kotla Stadium was renamed after the late Union minister Arun Jaitley, who had been Delhi cricket chief — a decision opposed by former sportspersons like Bishan Singh Bedi.

With Friday’s government decision, the country now has two national sporting awards in Dhyan Chand’s name, the other being the Dhyan Chand Award for Lifetime Achievement in Sports and Games. The Khel Ratna is handed out for outstanding performance over the four years immediately preceding the award.

The Congress said it welcomed any attempt to honour Dhyan Chand but advised the government not to use his name for petty “politicking” and suggested the renaming decision was a ploy to divert attention from the Pegasus snooping allegations and the farmers’ agitation.

“Dhyan Chand was a magician of hockey.... We welcome any attempt to honour him, but Prime Minister Narendra Modi should not have used his name in politicking, to serve his petty political interests,” party communications chief Randeep Surjewala said.

Tharoor had in a tweet listed 23 of the Modi government’s schemes and contended they were merely renamed versions of programmes launched by previous Congress or Congress-led governments.

“Why we in @INCIndia insist this is a name-changing government, not a game-changing one!” Tharoor had said.

You… lost. But you won our hearts: Naveen