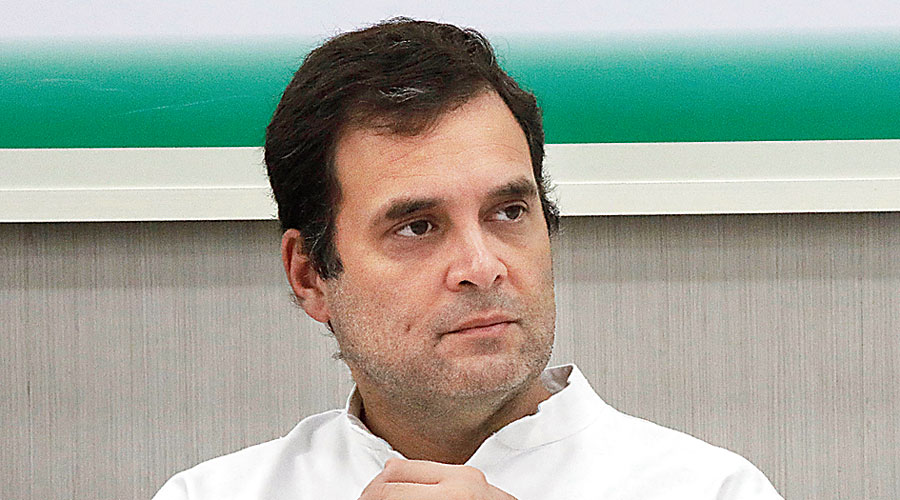 Rahul Gandhi on Tuesday accused Facebook and WhatsApp of a “brazen assault” on India’s democracy and social harmony, asserting that no foreign company could be allowed to interfere in the nation’s affairs.

A day after the Congress sought a criminal investigation against Facebook, claiming that expecting any corrective measure from its top global authorities was futile as the nexus with the BJP ran deep, Rahul tweeted: “International media have fully exposed Facebook’s & WhatsApp’s brazen assault on India’s democracy & social harmony. No one, let alone a foreign company, can be allowed to interfere in our nation’s affairs. They must be investigated immediately & when found guilty, punished.”

The Wall Street Journal and Time magazine have been publishing reports on how Facebook had condoned hate posts of BJP leaders and pro-Hindutva Right-wingers, and how the American company had aided Narendra Modi’s electoral campaigns.

Sharing a complaint letter law minister Ravi Shankar Prasad has written to Facebook CEO Zuckerberg, Congress chief spokesperson Randeep Surjewala tweeted: “If Modi Govt has an iota of credibility, why doesn’t it agree to a JPC (joint parliamentary committee) probe into the shameless collusion between Facebook India & BJP. Why are u running scared? Why are u giving cover fire to guilty? Why protect the colluders? Where is the 56’ chest?

The Congress on Wednesday issued a statement saying: “The BJP has been on a mission to subvert India’s democracy and harmony from the time they came to power in 2014. Dismantling democratic institutions and undermining their authority is but second nature to them. Using all means available to them, a recent investigative article by reputed international media reveals, the BJP has gone above and beyond to propagate their agenda. The BJP is found to have availed the services of social media platforms to deceive the Indian public.”

The statement added: “The aim of the BJP is ‘divide and rule’ and the social media giant Facebook is helping them achieve this. Casting aside democratic principles, the BJP is attempting to rule the nation by manipulating and coercing public opinion. The blasphemous nexus between the BJP and Facebook is for all to witness and must be investigated without delay.”

Pointing to the WSJ and Time reports, the Congress said: “Facebook India and WhatsApp have been used to fire Modi and BJP’s social media campaign, spread hate and disharmony within India and more. From Facebook India’s head of public policy, Ankhi Das’s collusion with the BJP even before the 2014 Lok Sabha elections, to Facebook’s inaction to pull down pages, posts that fuel communal hatred and fake news, the link between the two seems stronger than ever. Moreover, Facebook’s global leadership has been aware of the biases and partisanship but remained willing participants, proving that the unholy nexus between BJP-FB has hit the nerve centre of our nation’s democratic functioning.”

The statement has pointed to a news report alleging that Facebook had pulled down pages on the BJP’s complaints in the run-up to the 2019 Lok Sabha elections but refused to act on incendiary uploads by the RSS ecosystem.

“The BJP had flagged 44 rival pages to Facebook and 14 were pulled down,” the Congress statement claimed. The pages flagged by the BJP are the official accounts of the Bhim Army, the satire site We Hate BJP and a page called The Truth of Gujarat that shares mostly Alt News fact checks.

The Congress had on Monday sought a criminal investigation into the affairs of Facebook India. Earlier, the party had written twice to Zuckerberg warning of legal action and urging him to overhaul the company’s India leadership.

Asserting that it was no more a political or partisan matter, the Congress on Monday broadened the scope of its demand by asking for an inquiry by a parliamentary standing committee on information technology into the activities of all heads of public policy teams of foreign technology companies operating in India and establish a code of conduct for them.

The Congress feared that its letters to Zuckerberg might turn out to be an exercise in futility as the Facebook headquarters had not acted despite full knowledge of its India team’s biases against the Opposition party and alignment with the BJP.

The Congress had said in a statement: “India is a sovereign republic and simply cannot tolerate interference in its domestic affairs by anyone, let alone a foreign company in pursuit of profits. The founders and leaders of the Congress party sacrificed their lives to win India her freedom and to establish India as a democratic republic. We will not allow this hard-won democracy to be manipulated and tarnished.”