Advertisement
Home / India / Rahul Gandhi: Can you do it? Yes, Safa Febin can

Rahul Gandhi: Can you do it? Yes, Safa Febin can 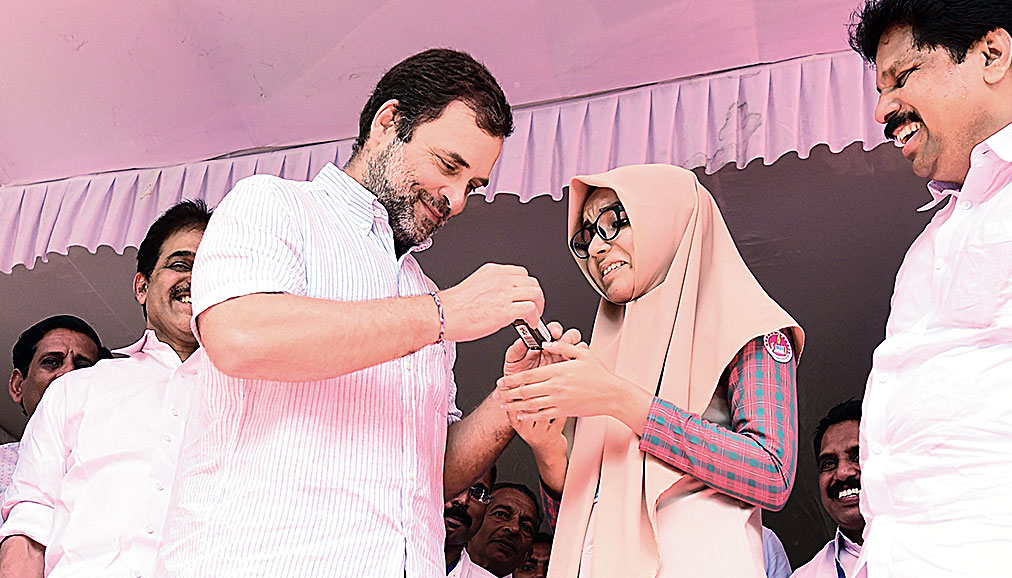 A 17-year-old student picked up Rahul Gandhi’s challenge and translated his speech into easy Malayalam as he spoke at her school in Kerala on Thursday, conveying with pleasing panache the Congress leader’s message on why science and hate cannot go together.

Rahul, the MP from Wayanad, was at Karuvakundu Government Higher Secondary School in Malappuram to inaugurate its new science lab.

“I am going to speak in English, but I would like someone to translate,” he said. “Is there a student who would like to translate what I am saying? Is there somebody?” he asked, smiling, as he scanned the young audience.

Safa Febin, who had never translated a speech before, took up the gauntlet, walking up to the dais to a deafening cheer from the around 4,000 students. Rahul went across the stage to shake hands with her and hand her the microphone.

“What’s your name?” he asked, before turning towards the audience and speaking into the microphone: “Thank you, Safa, for helping me translate.” She covered her face with one hand, the other holding the mic, as another cheer followed.

The teenager hit the ground running, not fumbling even for a second as the Congress leader started speaking.

Rahul told the students that to learn science, the most important thing was to have an open mind, drawing loud applause.

More applause followed from the students of the government school that Rahul had earlier in the speech said was considered the best in his constituency.

“Now there is a fashion in our country that you can hate people and at the same time progress scientifically. This is absolutely and complete nonsense.” Again, the children clapped loudly.

“The only way you can be truly scientific is if you are open to other people’s ideas,” Rahul said. “If you are curious, you try to understand why somebody thinks the way they do. And it is a natural thing. It is the essence of being a human being. If you go and speak to any child, the smallest child, you will see that he is curious, or she is curious.” (Applause)

“They are always looking around, trying to figure out the world around them. You will never find a child who is full of hatred,” he said.

Here, Safa, a science student who will sit for her board exams in April next year and the daughter of madarsa teacher Kunji Mohammed, stumbled for the first time. She looked at Rahul, lost for the Malayalam word for hate.

“Who is full of hatred,” Rahul repeated. Safa tried translating, and got it right with prompting from one of the leaders seated on the dais behind her, “Vidvesham”.

“Have you ever seen a child full of hatred?” Rahul asked. Quick on the uptake, Safa got it right again. “Never, no?” Rahul asked. The audience responded with a “No” without waiting for Safa to translate.

“But you have seen a curious child?” he asked. Again the answer was prompt: “Yes.”

The students roared when while speaking about the professions they might opt for in future, Rahul said some of them might join politics.

They applauded again when as their MP, he promised to raise their demands in Parliament.

Rahul concluded his speech with a request to the principal and the teachers to allow the students to ask as many difficult questions as they liked. “The heart of scientific nature is curiosity and the question. In science, continuously asking the question is more important than the answer,” he said, stressing no question is “stupid”.

The Congress leader thanked Safa for readily accepting the challenge to be the translator, shook hands with her again and gave her a bar of Snickers chocolate.

“I never thought I would get such an opportunity. But I got the chance with God’s blessing. I am very happy,” she later told The Telegraph.

“I was really scared when I walked on the stage with such a big leader. But then he told me not to worry and do my best.” she said. “Once I got going I was listening to every word of his. Then I did my best to translate them into Malayalam,” said the English-medium student who has studied Malayalam only as a subject.

Neither she nor the other students seemed to mind that Rahul had made the common mistake of using the word Malayali, used to refer to Kerala’s residents, for Malayalam.

“Once I got back home, I realised people were congratulating me on Facebook. I am still floating in a dream-like condition,” Safa chuckled.

The speaker who was translated by Safa would be happy to know her goal: to graduate in Physics.