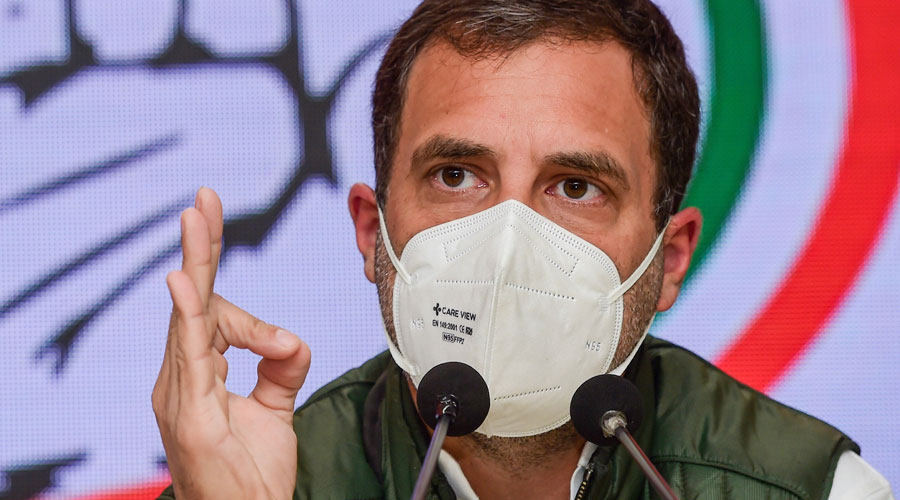 The India-China agreement on disengagement from the Pangong Lake’s banks has led Rahul Gandhi to accuse Prime Minister Narendra Modi of ceding a piece of “Bharat Mata” to China and call him “a coward who cannot stand up to the Chinese”.

“Why has Modi given Indian territory to China? It is absolute 100 per cent cowardice, nothing else. The Prime Minister is a coward who cannot stand up to the Chinese,” the former Congress president said at an early morning news conference on Friday.

Military veterans too have expressed concern that the agreement commits India to stop patrolling territory it claims and controls — saying this means giving up more territory — and questioned the government’s silence on the restoration of status quo ante.Rahul has consistently been querying Modi’s silence on the Chinese intrusion and alleging the Prime Minister is afraid.

“The defence minister (Rajnath Singh) sheepishly made the statement (about the disengagement agreement) in both Houses of Parliament (on Thursday). Why doesn’t the Prime Minister say, ‘I have given India’s territory to the Chinese?’ This is a question that needs to be answered,” Rahul said.

“Our forces worked hard to occupy the Kailash ranges. Why have Indian troops been asked to move back? What has India got in return? Why are Chinese troops not vacating Depsang, Gogra-Hot Springs?”

India claims territory till Finger 8 but the Chinese have advanced 8km up to Finger 4 from their erstwhile position at Finger 8. Rajnath has now told Parliament the Chinese will return east of Finger 8 and the Indian troops will go back to Finger 3 from Finger 4.

Rahul flagged the government’s decision to move back troops to Finger 3 despite Finger 4 being India-claimed territory.

“It is crystal clear that Modi has bowed to China. He has surrendered,” he said. “I’m surprised the press is behaving like it is. This is absolutely absurd. You have a responsibility to raise these things. People should be enraged. The Prime Minister has given Indian territory to the Chinese.”Asked about the government’s argument of give and take, he said: “The ‘give’ is clear. We have given up Finger 4. The ‘give’ is clear — they are allowed to sit in Depsang. The ‘give’ is clear — they are in Gogra-Hot Springs. What is the ‘take’? You have fallen silent because the reason is clear. There is no ‘take’.”

Rahul later told two farmer rallies in Rajasthan that Modi lacked the guts to confront China and could only raise walls to stop the protesting farmers and use force against them.“The defence minister yesterday said in Parliament an agreement had been reached with China. What is the agreement? That Modi has decided to give up the land grabbed by Chinese troops,” he said.

Congress communications chief Randeep Surjewala later issued a statement responding to the defence ministry’s clarification that no territory had been ceded to China.

“The government’s unpardonable, blatant and brazen compromise of national security and India’s territorial integrity stands exposed and the Prime Minister and defence minister have undermined the astounding valour and insurmountable grit of our armed forces,” the statement said.

“The statement of the defence ministry, issued as part of ‘Operation Cover-up’, has uncovered the conspiratorial mask of a weak-kneed leadership that India does not deserve. The gaping holes in the statement are writ large. The statement made yesterday and the defence ministry’s statement today completely omit the fact that the government has agreed to withdraw Indian armed forces from dominant positions in ‘Kailash Ranges’ (southern bank, Pangong Tso lake area), where the Chinese are at a disadvantage, without any quid pro quo by China. Why has the government committed this unpardonable compromise with our national security?”

Surjewala added: “Why is the government withdrawing from Finger 4 to Finger 3 on the northern bank of Pangong Tso lake area? One of the most strategic and provocative incursions into the Indian territory by the Chinese is on the Depsang Plains.

“The Chinese have occupied our territory 18 kilometres inside the LAC up to Y-Junction (bottleneck). This has also jeopardised the... strategically placed Daulat Beg Oldi airstrip.