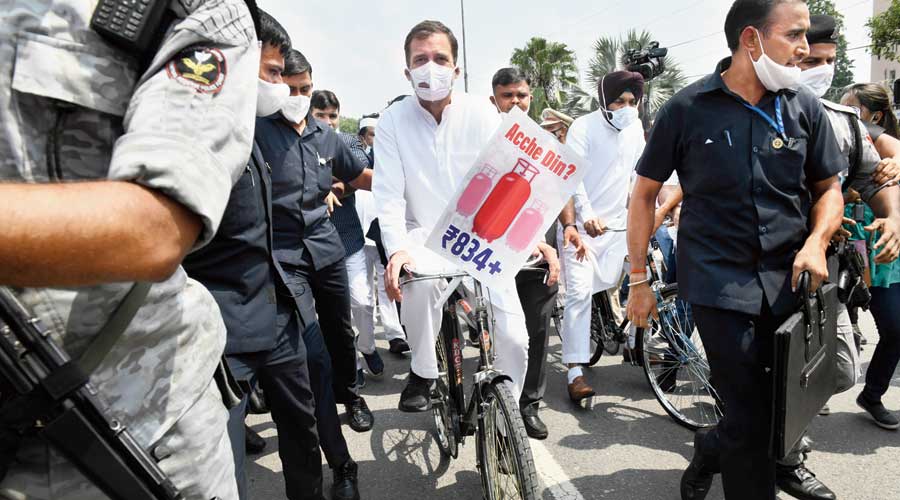 Rahul rides a bicycle in protest against high fuel prices after he met other Opposition leaders at the Constitution Club in New Delhi.
Prem Singh
Sanjay K. Jha   |   New Delhi   |   Published 04.08.21, 01:54 AM

Rahul Gandhi on Tuesday led a group of MPs in cycling to Parliament to draw the nation’s attention to the scourge of price rise after a meeting at which Opposition leaders pledged to unite and fight the Narendra Modi regime.

While Rahul’s tractor ride to Parliament last week symbolised the farmers’ struggle against the government’s obduracy on the three controversial farm laws, the bicycle was used to amplify the agony of the common man burdened by abnormally high prices of essential commodities, including petroleum products. Placards asking if one LPG cylinder costing Rs 834 meant “achchhe din” were fixed to the bicycles.

Rahul himself proposed at the breakfast meeting that members could cycle to Parliament to highlight the people’s sufferings. Around 40 bicycles were arranged by the Youth Congress and all of them were used as the younger MPs followed the Congress leader through the jam caused by jostling mediapersons, party workers and policemen. Parliament is less than a kilometre from the Constitution Club, where Rahul hosted the meeting of Opposition MPs.

The meeting saw every leader stress the need for unity, with Rahul pointing out that the government was able to bulldoze the Opposition that represents 60 per cent of the population only because “we are not united”.

Conceding there were differences among parties, he said there was complete agreement on three issues — farmers, Pegasus snooping and price rise — and this should be enough of a cementing factor to ensure a united approach. The parties present at the meeting represented the true federal spirit of India and smaller issues should not disturb the unity of purpose, which is to save the country, Rahul added.

All other parties endorsed this view, committing themselves to fight the Modi regime together. The most emphatic message came from the Trinamul Congress whose absence from the last Opposition meeting had triggered speculation about disunity. Trinamul MP Kalyan Banerjee said Bengal had shown that Modi-Amit Shah could be fought and defeated despite the coercive pressure of the Enforcement Directorate, the CBI and other central agencies.

Shiv Sena MP Sanjay Raut also insisted there was no need to fear and that a unified fight would easily unsettle the Modi regime.

A senior leader present at the meeting told The Telegraph: “For the first time after the devastating defeat in the 2019 parliamentary election, the determination to fight this regime was on display.”

The senior leader said: “It was indeed a significant occasion marked by disappearance of pessimism. We cannot say at this stage that an alternative is ready to dislodge the government but we could feel the emergence of a new hope today. Some of us had reservations about Rahul Gandhi but he showed leadership mettle.”

A Congress leader echoed this sentiment, saying: “There indeed were doubts about his capabilities, deepened by his decision to resign as party chief and leave the boat rudderless at this critical juncture. But he has now more than convinced everybody that he can do it. Nobody else can generate so much energy and hope within minutes. He barely spoke for four minutes but his humility, elegance and precision impressed everybody. I talked to several leaders of other parties and they were very impressed and hopeful.” 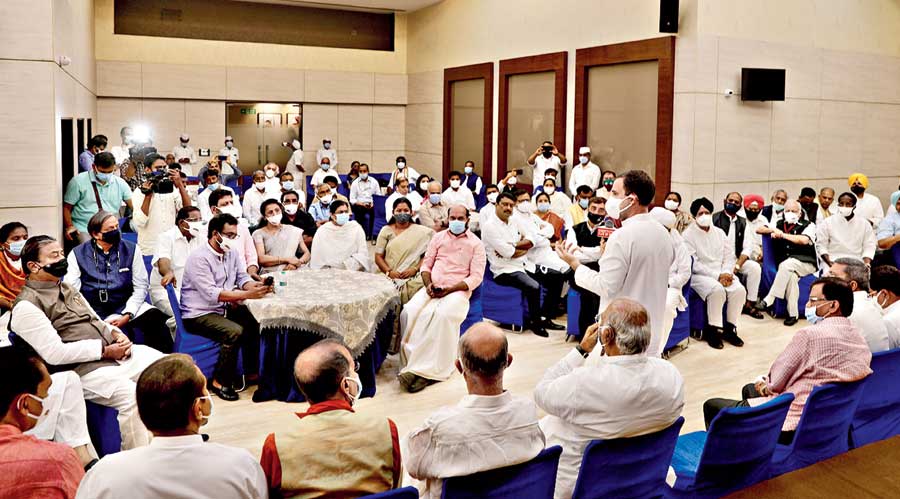 Asked what the takeaway from the meeting was, a Rajya Sabha MP said: “What was unstated was of the greatest significance. There was no discussion on leadership, no resolutions passed but the implicit message was the complete absence of disagreement on Rahul’s leadership. If this has happened when he is not holding any post and there are murmurs of dissent within his party, one can imagine he won’t have any hurdles in his way once the Congress makes up its mind and he starts his national campaign. We assume the leadership issue is more or less settled.”

Rahul himself showed maturity by stressing on collective effort and unity of purpose. He posted a photograph of the meeting with Opposition leaders with this crisp message: “One priority — our country, our people.” After the meeting, his tweet said: “Neither our faces are essential, nor our names. What is important is that we are representatives of people: in every face, there are faces of crores of Indians who are tormented by price rise. Is this achchhe din?”

This narrative is antithetical to the politics of domination and supremacy. The subtext is clear: that issues are supreme and the country has to be saved. The contentious question — who will be the Prime Minister — will become relevant only after the mission of evicting the current government is accomplished. Till then, every leader will work with the larger cause in mind. This was the message of the meeting.

The Bahujan Samaj Party, whose hidden axis with the BJP has been a subject of speculation over the past few years, was absent. So was the Aam Aadmi Party (AAP). Most leaders, however, said AAP was with the Opposition and their absence was more because of a communication gap. Those present included the Congress, Shiv Sena, Trinamul, NCP, DMK, RJD, Samajwadi Party, CPM, CPI, IUML, National Conference, JMM, RSP, KCM and the LJD.