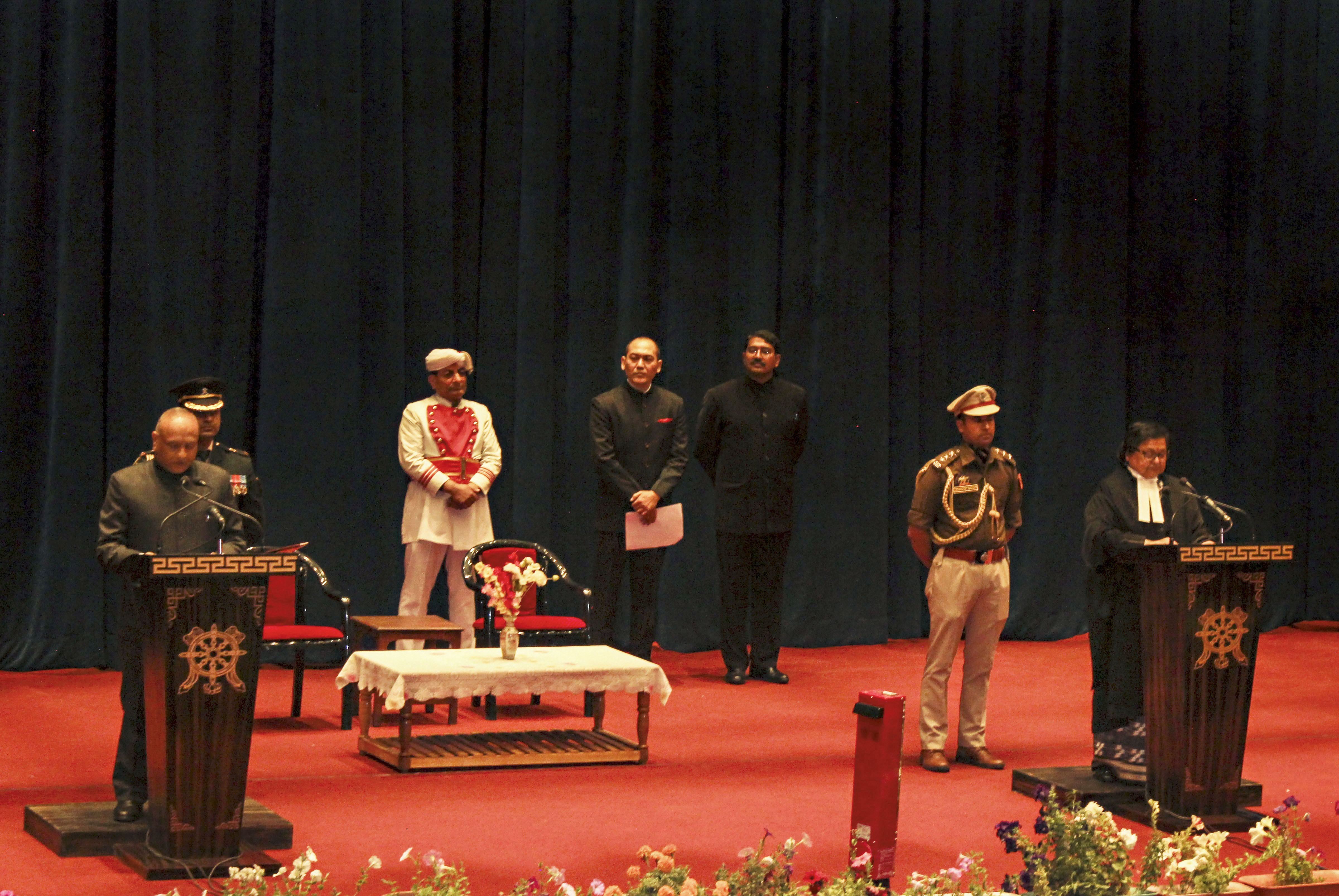 Chief Justice of Jammu and Kashmir High Court Justice Gita Mittal administers oath to Radha Krishna Mathur as the first lieutenant-governor of the union territory of Ladakh during a swearing-in ceremony, in Leh, Thursday, October 31, 2019.
PTI
PTI   |   Srinagar   |   Published 31.10.19, 08:05 AM

Both the territories came into existence after the bifurcation of the state of Jammu and Kashmir into union territories.

Mathur, who will turn 66 next month, was administered the oath of office by Chief Justice of Jammu and Kashmir High Court Gita Mittal at a function held at the Sindhu Sanskriti auditorium in Srinagar, which was attended by officials of Leh and Kargil hill councils, army and paramilitary forces, religious leaders and the general public.

The oath of office to Murmu, who will turn 60 next month, was also administered by Justice Mittal at a function held at Raj Bhawan at the foothills of the Zaberwan range.

The warrant of appointment of Murmu, a 1985 batch IAS officer from Gujarat, was read out by chief secretary B. V. R. Subrahmanyam.

BJP leader Jugal Kishore and Rajya Sabha MP and PDP member Nazir Laway were among the over 250 guests present at the Murmu's swearing-in ceremony.

Mathur, after the swearing-in ceremony, said a lot of development activities needed to be carried out in the border areas.

'Already the government is implementing several programmes in the region, priorities for Ladakh will be set in the new regime in consultation with the public and hill councils,' an official spokesperson quoted him as saying.

Mathur, a 1977-batch IAS officer from Tripura, , who was given a guard of honour at the venue by Ladakh police, said his experience of working in the backward and border areas in the capacity of the chief secretary of Tripura and the defence secretary will be useful.

A post-graduate in industrial engineering from the IIT, Mathur retired as the defence secretary in 2015 and was appointed as the chief information commissioner in December of the same year. He completed his tenure in November last year after attaining the age of 65 years.

Ahead of the swearing-in, the Union home ministry revoked a notification of December last year imposing President's rule in undivided Jammu and Kashmir.

The Centre, on Wednesday night, appointed Umang Narula, a 1989-batch IAS officer, as an advisor to Mathur, besides posting S. S. Khandare, a 1995-batch IPS officer, as the 'head of police' in Ladakh.

With a population of nearly three lakh, Ladakh is strategically located as it shares borders with Pakistan as well as China.