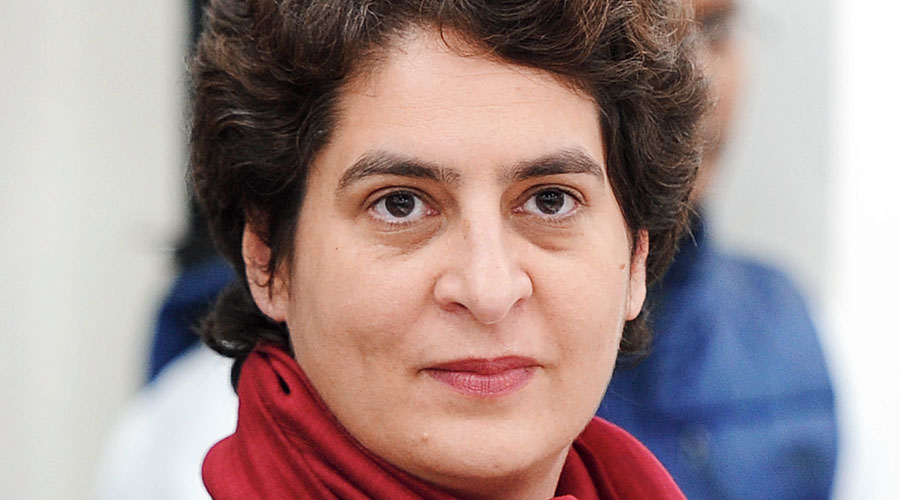 The Congress sees the eviction notice to Priyanka Gandhi as a sign of the BJP’s desperation at her success in providing a credible resistance to the Yogi Adityanath government when more formidable rivals like the Samajwadi Party and the Bahujan Samaj Party have fallen silent.

The Centre on Wednesday asked the Congress general secretary to vacate by August 1 the Lodhi Estate bungalow she had been allocated 23 years ago, underlining she no longer enjoys the Special Protection Group cover that made her eligible for accommodation in the high-security zone.

Senior Congress leaders say that finding another house in Delhi isn’t an issue at all, and that Priyanka was living in government accommodation only because she remains a Z-plus protectee despite the removal of SPG cover.

They have alleged a political vendetta, highlighting how Rajiv Gandhi’s assassination followed the withdrawal of his security.

Many politicians who are not MPs, such as BJP veterans L.K. Advani and Murli Manohar Joshi, have been given government accommodation despite much lower threat perception.

“Priyanka does not have an accommodation problem. But you can’t create a Z-plus security system just anywhere,” a senior Congress leader told The Telegraph.

“Still, she has decided to vacate the house within a few weeks if that satisfies the government. The issue here is entirely different. In the middle of an unprecedented health and economic crisis, worsened by the border intrusion by China, the government’s priorities are bewildering.”

“(It’s) a clear attempt to silence the Congress, which is asking uncomfortable questions on the coronavirus management, economy and China. The message is clear: fall in line. Look how the other Opposition leaders are behaving,” he said.

“In Priyanka’s case, it’s merely because she has sustained the pressure on the Yogi Adityanath government. But if (Prime Minister Narendra) Modi, (Union home minister) Amit Shah or Yogi think she will surrender, they haven’t correctly assessed the person.”

While the noise over the issue may help the government divert attention from China and the economy for now, the charge of political vendetta could help the Congress in future.

On one hand, its sustained questioning of the government has reinforced the Congress’s status as the main challenger to Modi despite two humiliating defeats. On the other, Priyanka has succeeded in generating much curiosity in Uttar Pradesh.

As she quietly sets out to rebuild the party machinery in the heartland state, Priyanka has taken care to give voice to the concerns of every section of society, from students to farmers to women.

The Congress was the only party that vociferously opposed the government’s crackdown on the anti-citizenship-act protesters, with Priyanka getting personally involved in approaching the National Human Rights Commission.

She built on that image by instituting support systems for the distressed migrant workers and the poor during the humanitarian crisis triggered by the unplanned lockdown.

The publicity over the bus controversy, followed by the arrest of Uttar Pradesh Congress president Ajay Kumar Lallu, helped the Congress position itself on the centre stage of state politics despite being a fringe player on the electoral field.

Mayawati’s failure to mount pressure on the BJP has further cemented Priyanka’s stature as the main Opposition voice in India’s most populous state.

A senior Congress leader accused the Adityanath government of a vindictive mindset.

“Leave aside Priyankaji, even ordinary Congress workers are being targeted for raising their voice against the government. The kitchens we were running to feed the poor during the lockdown were closed down. Countless FIRs have been filed against Congress workers over the past three-four months,” he said.

“The party’s minority department chief, Shahnawaz Alam, was mysteriously picked up by the police a few days ago without a complaint. We were informally told that Shahnawaz had thrown stones at an anti-CAA protest — a falsehood.”

He added: “The Congress’s refusal to surrender to Adityanath’s coercive tactics has made the BJP so desperate that people are being rounded up just for showing an intention to join us.”

“A couple of days ago, FIRs were filed against four people while they were coming to the Congress office to join the party. The charge is that they were travelling in an open jeep without wearing masks. The jeep was seized too. We are facing this daily.”

Priyanka, who has chosen a house in Lucknow’s Park Road to stay in during her Uttar Pradesh trips, has no immediate plans to shift out of Delhi.

But after a few months, she will start spending more time in Uttar Pradesh, where party workers heartily welcomed her after she received the eviction notice, and where elections are due in March 2022.