In Tamil Nadu alone, more than 400 private coaching centres have come up, a business worth around Rs 5,750 crore annually 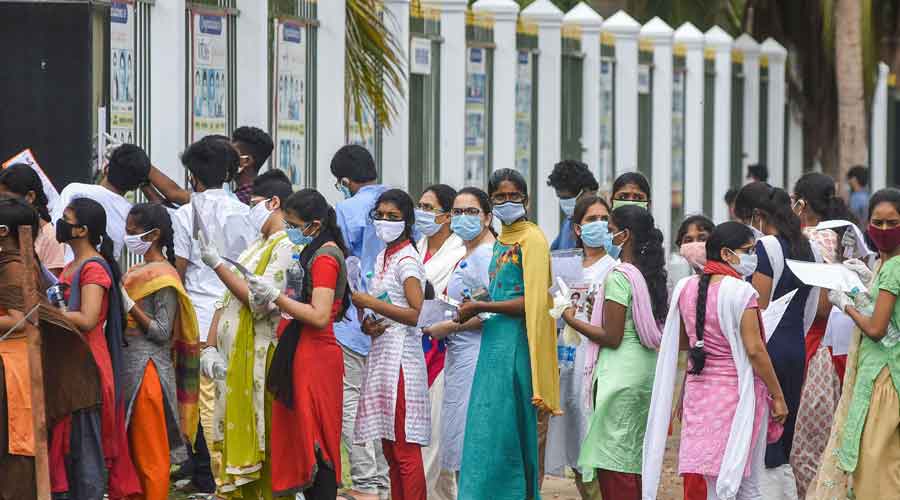 Private coaching centres for the medical entrance exam NEET have turned students into “marks-scoring machines” who have no exposure to all-round skill development and are “poor” candidates for the healthcare profession, a study in Tamil Nadu has found.

The study found that over 71 per cent of the respondents had cracked the NEET in a repeat attempt. In 2016-17, only 12.47 per cent of the successful candidates had been repeaters. The panel did not reveal the number of respondents but said the study had been conducted only in Tamil Nadu, a state famous for its quality healthcare.

Many students do not enrol for graduation after passing Class XII and instead get admitted to private coaching centres in the hope of clearing the NEET, the study found.

According to the panel, 99 per cent of the students who had cracked the NEET and entered the MBBS and BDS (dental) courses had studied at private preparatory coaching centres.

“The coaching centres make the students ‘marks-scoring machines’ as learning is discouraged in favour of coaching. The prospective medical aspirants do not get the opportunity to acquire all-round skills… including cognitive, reasoning, creative, social and behavioural skills that are very much essential prior to enter medical studies,” the report said.

Based on the findings, the Tamil Nadu government last week passed a bill seeking to exempt the state from the NEET under the National Medical Commission Act. The bill, now with the governor, will be sent to the President, whose assent is needed to override a central act through a state law.

In Tamil Nadu alone, more than 400 coaching centres have come up, a business worth around Rs 5,750 crore annually, the study found.

The report said coaching centres had mushroomed since the advent of the NEET as the national eligibility test in 2016. It was enforced on all states as the solitary medical entrance exam the next year.

The medical entrance coaching centres offer short-term, long-term and crash courses based on when a student enrols. Enrolment begins in Class IX. For a crash course, the fees are between Rs 10,000 and Rs 38,000, while they are in the range of Rs 30,000 to Rs 1.5 lakh for a one-year course and from Rs 2.5 lakh to Rs 4.5 lakh for four-year training.

The cost goes up to as high as Rs 10 lakh in case students do not make it in the NEET exam in the first attempt and once again seek the help of the coaching centres.

“Both educational institutions and parents are now inclined more towards coaching the kids to prepare them for successfully appearing in the NEET rather than grooming them all round as educated human beings with all relevant knowledge, skills and attitudes,” the report said.

“This trend confirms that coaching has replaced learning and paved the way for the entry of poorly skilled candidates (who are financially and socially strong) belonging to the affluent segment of the society into medical education,” it added.

The panel feared that the medical profession could become even more commercialised and dominated by inept players.

Studying the profiles of students who had studied at coaching centres, the panel found that the majority of those who make it to the medical colleges had cleared the NEET with average grades. Many had secured seats after barely clearing the NEET, whose pass marks is 20 per cent.

The annual income of about 97 per cent of the families of government school students is less than Rs 1 lakh in Tamil Nadu and they cannot afford coaching centre fees, the panel found.

Private medical colleges charge steep fees of around Rs 30 lakh per year. The committee felt that the hope that a common entrance exam would help get around problems such as capitation fees and ensure good quality students had not materialised.

In both government and private colleges, the share of students who had studied in Tamil-medium schools has declined after the NEET was made mandatory in 2017, the panel found.

In 2011 when there was no NEET and medical students were selected on the basis of Class XII marks, 19.79 per cent of MBBS seats had been filled up by students from Tamil-medium schools. Post-NEET, that figure had declined to 1.99 per cent in 2020, with English-medium students reaping the benefits.

In both government and private colleges, students from families of first-generation graduates had taken up 24.61 per cent of the medical seats in 2011, which fell to 14.46 in 2020.

Predictability is a key feature of a common entrance test and it should be able to determine more precisely the ability of a student to perform well in higher studies, the panel observed.

The committee examined the performance of MBBS students pre-NEET and post-NEET and found no improvement. Had the NEET helped pick the best students as envisaged, performance in the MBBS would have improved, but that had not happened, the study found. Therefore, the NEET cannot be considered the best predictor, it said.