Tribute to Vajpayee on his second death anniversary 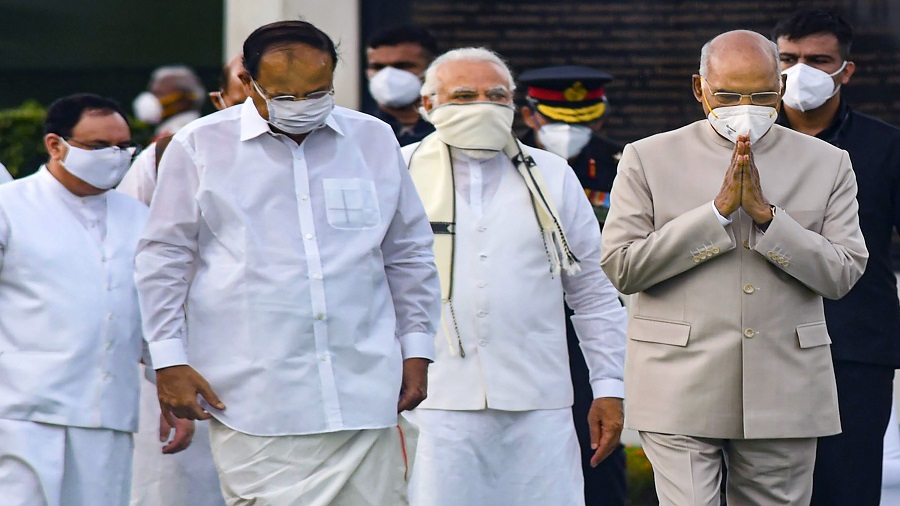 They were joined by several Union ministers and other leaders at 'Sadaiv Atal', the memorial to Vajpayee in the national capital, in paying respects to him.

Modi said India will always remember his outstanding service and efforts towards the nation's progress.

"Tributes to beloved Atal Ji on his Punya Tithi. India will always remember his outstanding service and efforts towards our nation's progress," Modi said, tweeting a nearly two-minute-long montage of old photos in memory of the former prime minister.

The montage features photos and videos of Vajpayee taken during his long career in politics.

NDTV reports Modi's voiceover playing in the video, as saying: "This country will never forget Atal ji's sacrifice. Under his leadership India held its head high as a nuclear power. As a politician, a Member of Parliament, a minister or Prime Minister, Atal ji has performed very well in many roles. Many great things can be said about Atal ji's life, and no one aspect is lesser than the other. His speeches used to be talked about. In future if some expert analysed his speeches, the strength in his silence would turn out many times stronger than his speeches. In parliament also, he would only say a few words. People would get the message from his silence..."

Tributes to beloved Atal Ji on his Punya Tithi. India will always remember his outstanding service and efforts towards our nation’s progress. pic.twitter.com/ZF0H3vEPVd

Vajpayee, the first BJP prime minister, had passed away on this day in 2018.

A statesman and saffron stalwart, he was fondly remembered by other senior BJP leaders.

Home minister Amit Shah said the country for the first time saw "good governance" being implemented across the nation under Vajpayee.

The Modi government is striving for the welfare of the poor and good governance by keeping his ideas at the centre of its work, Shah added.

Defence minister Rajnath Singh said Vajpayee's tremendous contribution towards pubic life and India's development will always be cherished, and his vision for the country will continue to inspire coming generations.

On this day, we remember and pay tributes to former Prime Minister and statesman Late Shri Atal Bihari Vajpayee who took the UN by storm in 1977 with his speech in Hindi at the General Assembly. #AtalBihariVajpayee @MEAIndia @IndianDiplomacy pic.twitter.com/oqbU71R5Dk

The Twitter handle of the Permanent Mission of India to the United Nations tweeted a video of Vajpayee speaking at the UN General Assembly in 1997.