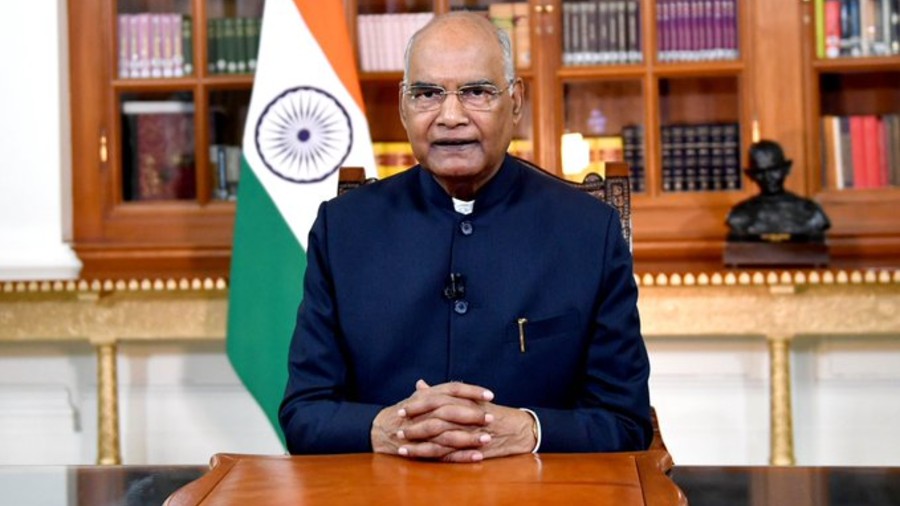 President R.M. Kovind on Saturday said the independence of the judiciary was “non-negotiable” but expressed concern at the huge backlog of cases, which he said affected the country’s economy too.

Kovind complimented the judiciary for sustaining the people’s faith in the institution. He suggested the establishment of an all-India judicial service to help appoint judges to the lower as well as higher courts.

So far, the higher judiciary has jealously guarded the collegium system of appointing apex court and high court judges, with the Supreme Court in 2015 quashing a law that gave the government a bigger say in judges’ appointments.

“At the risk of repeating myself, I would like to once again point to the cost of justice. In a developing country like ours, a very small section of citizens can afford to knock on the doors of the courts of justice,” the President said, delivering the valedictory address at the end of the two-day Constitution Day celebrations at Vigyan Bhavan.

“From the lower courts to the Supreme Court, it becomes increasingly difficult for an average citizen to seek redressal of grievances. Fortunately, there are, of course, individuals and also institutions that offer pro bono services. The Supreme Court too has taken praiseworthy steps in this direction.”

He added: “I wish to see increased access to legal aid and advisory services for all. It can take the form of a movement or the form of a better institutionalised mechanism.”

Kovind then moved on to the huge pendency of cases, saying it had consequences for economic growth and development. He suggested that technology could help in the efforts to find a way out.

Successive chief justices have argued that one reason for the huge case backlog was the government’s delay in filling vacant judges’ posts. Kovind too touched on the subject. “While we talk about the pendency of cases, another pertinent issue relates to appointments in the judiciary. I am of the firm view that the independence of the judiciary is non-negotiable. Without diluting it to the slightest degree, can a better way be found to select judges for the higher judiciary? For instance, there can be an all-India judicial service which can select, nurture and promote the right talent, right from the lower levels to the higher levels,” he said.

“This idea is not new and has been around for more than half a century without being tested. I’m sure that there could also be other, better suggestions for reforming the system. Ultimately, the aim should be to strengthen the justice delivery mechanism.”

So far, an all-India judicial service has been mooted mainly as a mechanism to appoint lower court judges.

“It is indeed a creditable achievement that people repose faith in the judiciary. And the Indian judiciary must be complimented for this well-earned achievement,” Kovind said.

“As a former member of the Bar, I always regarded it as a privilege to serve the cause of justice in my capacity as a lawyer. From this vantage position, I am also acutely conscious of obstacles in the path of justice delivery,” he added.

“In the Indian tradition, judges are imagined as a model of rectitude and detachment, more akin to ‘sthitapragya’ (a serene and wise person). We have a rich history of legions of such judges known for their utterances full of sagacity and conduct beyond reproach, which have become hallmarks for future generations. I am happy to note that the Indian judiciary has been adhering to those highest standards.”

Kovind said that justice, liberty, equality and fraternity lay at the core of the Constitution, whose Preamble expanded the notion of justice to include its social, economic and political aspects. “How far have we succeeded when compared to this ideal?” he asked.

The President said that democracy revolved around the fulcrum of justice, and got strengthened if the judiciary, legislature and executive were in harmony.

Chief Justice of India N.V. Ramana, in his address, regretted that the “legislature does not conduct studies or assess the impact of the laws that it passes”.

He cited the creation of commercial courts and the amendments to the Negotiable Instruments Act (cheque bounce cases) without the establishment of adequate infrastructure to take on an increased volume of cases.

“The introduction of Section 138 of the Negotiable Instruments Act is an example. Now the already burdened magistrates are further burdened by thousands of these cases,” Justice Ramana said.

“Similarly, rebranding the existing courts as commercial courts, without creating a special infrastructure, will not have any impact on the pendency. Therefore, the issue of pendency is multifaceted. I hope the government takes into consideration the suggestions received during these two days and resolves the prevailing issues.”

The Chief Justice endorsed a suggestion from attorney-general K.K. Venugopal to set up four regional courts of appeal --- one each in the north, south, east and west --- to deal with challenges to high court orders.

This, Justice Ramana said, would ease the burden on the Supreme Court, leaving it to deal with key constitutional issues rather than cases relating to matrimony, rent control and the like.

Justice Ramana complimented Kovind for his constant encouragement of the judiciary, underlining how the President had always stressed the need to have more women judges.

He said that while the Centre had been allocating substantial amounts towards the development of judicial infrastructure, some of the states were not doing their bit.

“As a result, the central funds largely remain unutilised. That is the reason I am proposing a special purpose vehicle of a judicial infrastructure authority. I beseech the (law) minister to take this proposal to its logical conclusion. I also urge the hon’ble minister to expedite the process of filling judicial vacancies,” Justice Ramana said.