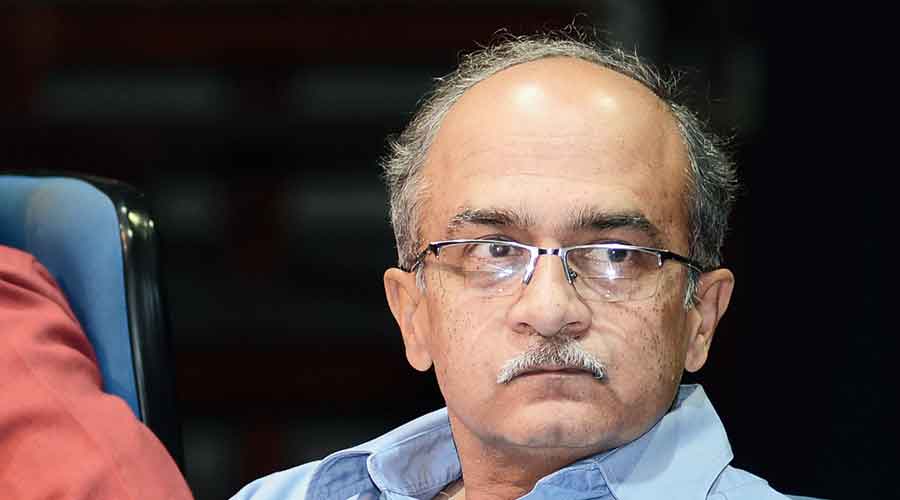 Lawyer Prashant Bhushan on Monday declined the Supreme Court’s offer to apologise for his tweets, saying it would be “contempt of his conscience and of an institution that I hold in highest esteem” if he were to withdraw a statement he believes to be true.

The bench of Justices Arun Mishra, B.R. Gavai and Krishna Murari, which had on August 14 convicted Bhushan of criminal contempt, will on Tuesday examine his supplementary statement and pronounce the sentence. The maximum punishment for criminal contempt of court is six months’ imprisonment or a fine or both.

The Mother and Child sculpture on the lawns of the Supreme Court. Sculptor Chintamoni Kar had described the composition: “Mother India sheltering young Republic represented by the symbol of a child upholding the law of the country shown in the form of an open book, with the symbol of the balance representing law and justice.” In the late 1970s, in the run-up to the installation of the sculpture, a section of lawyers had protested in the glorious tradition of dissent. The lawyers had said the lady resembled Indira Gandhi and the theme “stinks of the mother-and-son cult built up during the Emergency”, India Today magazine reported in 1978. Four days later, the lawyers submitted another memorandum to the then Union law minister in which they apologised for their earlier references to the “Indira-Sanjay cult” as the “maquette (scale model) of the bronze had been finalised in 1969, well before Indira had become India”, the magazine added. The law minister then? Shanti Bhushan, the father of Prashant Bhushan.
Sourced by The Telegraph
Advertisement

The following is Bhushan’s supplementary statement, filed through advocate Kamini Jaiswal on Tuesday:

It is with deep regret that I read the order of this Hon’ble Court dated 20th of August.

At the hearing the court asked me to take 2-3 days to reconsider the statement I made in the court. However, the order subsequently states: “We have given time to the contemnor to submit unconditional apology, if he so desires.”

I have never stood on ceremony when it comes to offering an apology for any mistake or wrongdoing on my part. It has been a privilege for me to have served this institution and bring several important public interest causes before it. I live with the realisation that I have received from this institution much more than I have had the opportunity to give it.

I cannot but have the highest regard for the institution of the Supreme Court. I believe that the Supreme Court is the last bastion of hope for the protection of fundamental rights, the watchdog institutions and indeed for constitutional democracy itself. It has rightly been called the most powerful court in the democratic world, and often an exemplar for courts across the globe.

Today in these troubling times, the hopes of the people of India vest in this court to ensure the rule of law and the Constitution and not an untrammelled rule of the executive. This casts a duty, especially for an officer of this court like myself, to speak up, when I believe there is a deviation from its sterling record.

Therefore I expressed myself in good faith, not to malign the Supreme Court or any particular Chief Justice, but to offer constructive criticism so that the court can arrest any drift away from its longstanding role as a guardian of the Constitution and custodian of peoples’ rights.

My tweets represented this bona fide belief that I continue to hold. Public expression of these beliefs was, I believe, in line with my higher obligations as a citizen and a loyal officer of this court.

Therefore, an apology for expression of these beliefs, conditional or unconditional, would be insincere. An apology cannot be a mere incantation and any apology has to, as the court has itself put it, be sincerely made.

This is especially so when I have made the statements bona fide and pleaded truths with full details, which have not been dealt with by the court.

If I retract a statement before this court that I otherwise believe to be true or offer an insincere apology, that in my eyes would amount to the contempt of my conscience and of an institution that I hold in highest esteem.