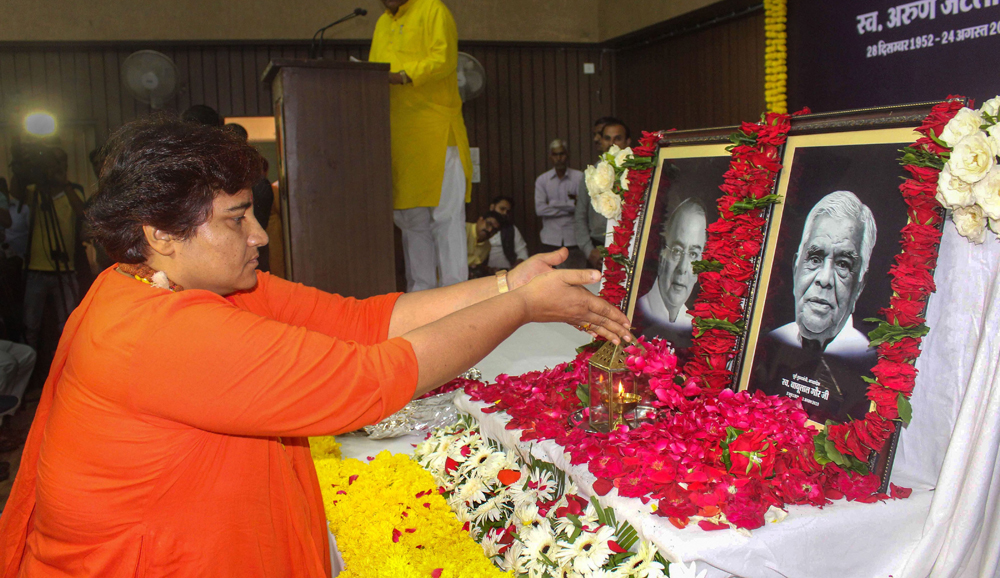 Pragya, out on bail in the Malegaon blast case, had in April claimed her “curse” had killed Mumbai cop Hemant Karkare, who died during the 26/11 attack shortly after arresting her.

On Monday, she said a monk had during the Lok Sabha polls cautioned her against the Opposition’s occult practices.

“A maharaj-ji told me not to give up on my sadhna (meditation) as the BJP was facing a hard time owing to the Opposition indulging in marak shakti (black magic) to harm the party’s efficient leadership,” the Bhopal MP said.

“I don’t remember everything he (the monk) said but the way our top leaders Sushma Swaraj, Arun Jaitley and Babulal Gaur have died in quick succession has forced me to think, ‘Wasn’t maharaj-ji right?’ You may or may not believe it but the truth won’t change.”

Pragya’s comments came at a memorial meeting held in Bhopal in honour of Jaitley and Gaur.

The 49-year-old, saffron-robed MP had been controversially fielded in the general election by the BJP to take on senior Congress leader Digvijaya Singh and to try to corner the Congress over some of its leaders’ alleged comments about “saffron terror”.

But ahead of the poll results, Pragya landed the party in a fix by lauding Nathuram Godse, the assassin of Mahatma Gandhi, as a patriot.

Prime Minister Narendra Modi had then said he would never be able to forgive her for the comment and BJP president Amit Shah promised firm action.

Pragya later issued a half-hearted public apology. No action has so far been taken against her. BJP leaders said she had been let off after apologising when the party served her with a notice to explain her conduct.