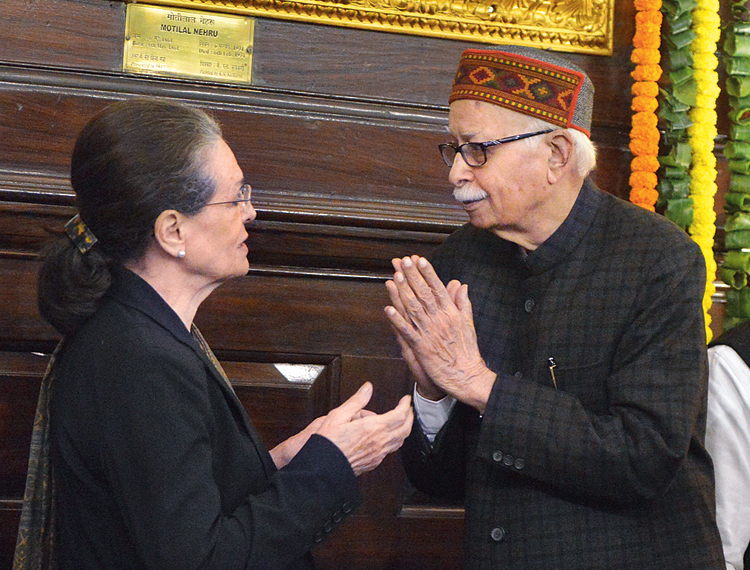 Calls for political pragmatism have been echoing in the Congress as the party crystallises possible support for a Shiv Sena-led government in Maharashtra against the reservations of some of its veterans.

While the top leadership has held intense discussions on the pros and cons of such a decision, many leaders have taken personal initiatives to write to party president Sonia Gandhi advocating an alliance with the Sena.

They have told her the party must lean towards pragmatism rather than ideological rigidity at a time of national crisis.

“Aligning with the Sena at this stage is not a compromise with ideology; it’s instead a tactical manoeuvre to protect the ideology,” a Congress politician who had spoken to Sonia on the subject told The Telegraph.

“Weaning the Sena from the RSS-BJP, the fountainhead of communalism, is part of the process of strengthening secularism. It will be foolish to fail to exploit this situation and thus force the disgruntled Sena to stick with the BJP.”

Initially, the entire Congress leadership had been uncomfortable with the idea of aligning with the Sena but a large section soon realised that this option offered a chance to weaken Narendra Modi’s control over the system.

The known opponents of any relationship with the Sena —such as A.K. Antony, K.C. Venugopal and Mallikarjun Kharge — have not only angered the party leaders from Maharashtra, they have also drawn criticism in private from many central Congress leaders.

“Minds frozen in the past are incapable of grasping the new reality” of the Narendra Modi-Amit Shah duopoly, one of these central leaders said bitterly.

“Didn’t the BJP — once untouchable in Indian politics — set aside its contentious ideological issues and ride to power on the shoulders of secular parties? Have we learnt no lessons from history?”

Some critics of the Congress have presumed that the usual pro-Hindutva suspects might be pushing the Sena alliance. Surprisingly, the greatest push has come from politicians known for their uncompromising stand on secularism.

They have told Sonia that before rejecting the Sena on ideological grounds, the Congress should understand the nature of the threat posed by Modi-Shah’s hegemonic control over the system.

“The Sena has been around for decades and its ideological perversion has troubled all of us. But the Sena is more about Marathi pride than the establishment of a Hindu Rashtra,” a Congress source said.

“It has in the past taken many decisions based on political considerations and regional chauvinism instead of a Hindutva agenda, as evidenced in its support for Congress presidential candidates Pranab Mukherjee and Pratibha Patil. On both occasions, the Sena leadership refused to go along with the BJP.”

Another leader placed matters in a wider perspective. “Without the RSS as the guiding force and the BJP’s expanded reach over the country, the Sena’s ideological problems become a minor issue,” he said.

“And if the Sena is showing signs of moderating its agenda, why should the secular forces rebuff it and close the options for its reform?”

He added: “Also, we must be realistic. Should we fight the force that has established a complete sway over democratic institutions — the judiciary, executive, the media — and the corporate world, or should we quibble over a minor irritant?”

A Rajya Sabha MP pointed to the Sena’s changing public postures and recalled that party chief Uddhav Thackeray had described the prospective political realignment as a possible new beginning.

Sena spokesperson Sanjay Raut recently tackled questions on his party’s past “anti-Congressism” and Hindutva leanings with a clever twist: “The main point is that the Congress led the freedom struggle and played a key role in the formation of the state of Maharashtra. And this we always acknowledged.”

Many of the Congress leaders who support a Sena-led arrangement also want the party to join the government.

Echoing the sentiments of Maharashtra’s Congress leadership and MLAs, they say the Congress will lose out if it stays out of the government, with the NCP and the Sena eating into its political space.

Pawar too is insisting on Congress participation, arguing this will provide stability to the government.

The ruling Congress on Tuesday secured control over 20 local government bodies out of the 49 where elections were held last week in Rajasthan.

The BJP reached the majority mark in only six.

The Congress won 965 of the 2,105 wards in the urban local bodies, leaving the BJP trailing at 736, according to the results declared by the state election office.

The Bahujan Samaj Party won 16 wards, the CPM got three and the Nationalist Congress Party two in the elections held on Saturday.