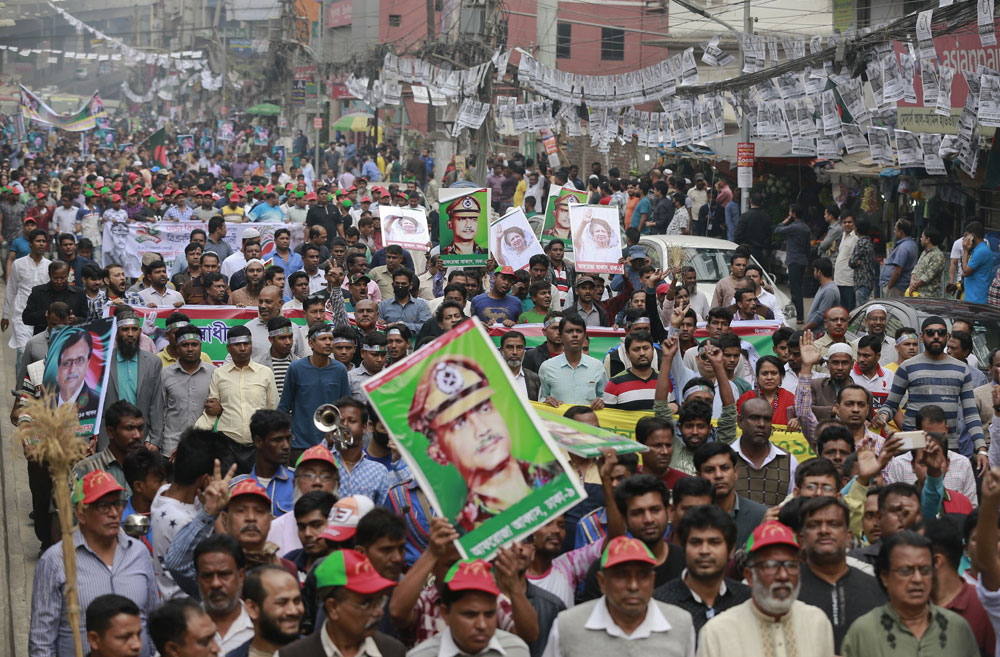 Dhaka’s historic Suhrawardy Park was quite the set of a spectacle last month. The smiling Prime Minister of Bangladesh, Sheikh Hasina Wajed, sat comfortably on the dais, her neatly pinned golden pallu covering half her head. The man seated beside her had his entire head and face covered with a white scarf. Maulana Shah Ahmad Shafi is the leader of the radical Islamist group, Hefajote Islam, and talking to women or even looking at them is against Hefajote’s code of conduct. In a first, though, he was sharing stage with a woman. What is more, he even bestowed on her an honorific — Qawmi Janani or mother of the qaum (in this case, the Islamic collective as well as the nation).

Qawmi Madrasas are Islamic seminaries. There are around 14,000 of them in Bangladesh and their teachings are considered orthodox, nudging the country’s youth towards a radical path. Hasina had announced last year that the Dawra-e-Hadith, the highest qaumi degree, will now be recognised as a postgraduation degree in Islamic Studies and Arabic. That day in November, the chairman of the Qawmi Madrasah Education Board said: “You are the ‘Mother of Qawmi’. If you were not there… people who are the Jamaat, pro-Moududis would not let it happen.”

In the run-up to the December 30 general elections, Bangladesh has witnessed an ideological flip-flop of sorts. The secular ruling party, Awami League, has been cosying up to the Islamists, while the main Opposition led by Khaleda Zia’s Bangladesh Nationalist Party (BNP), has joined hands with the secular alliance, Jatiya Oikya Front.

“Indeed, this election has thrown up big surprises. The two big parties have made a major shift in their political ideologies,” says Jatiya Oikya Front head Kamal Hossain, who is a freedom fighter and former Awami League leader. He asserts it is the Awami League’s changing political ideology that has forced secular parties to form an alliance against Hasina. Hossain adds, “If she were committed to the secular, liberal and socialist ethos of Bangladesh, and not pandering to the Islamists, we would have had no need to form this front.”

Indeed, Hasina’s proximity to the Islamists has increased during her last two terms as prime minister. In 2011, the Bangladeshi Parliament passed a bill seeking retention of Islam as the state religion, as well as the phrase “Bismillahir Rahmanir Rahim” in the Constitution, both legacies of the military regime of 1988. In 2017, Hasina’s government introduced religious education in government schools, edited out poems and stories that conservative Islamists deemed atheistic and, most recently, recognised the Qawmi Madrasa degrees.

Hasina also gave in to the demand of the Hefajote Islam to remove the Statue of Justice outside the Supreme Court building — a blindfolded woman dressed in a sari — on the grounds that it was idolatry and, therefore, un-Islamic. And when Islamist forces threatened and killed atheist bloggers, she said nothing. “The muted reactions to the blogger killings in 2015 and warnings to bloggers to restrain themselves instead of protecting them, indicate how her government tries to appease radical Islamists,” says Bangladeshi journalist and blogger Supriti Dhar.

Typically, it was the BNP that courted the Islamists. To be more specific, the Islamist religious and political party, Jamaat-e-Islami. In 1991, Jamaat had bagged 18 seats and emerged as a power player. It had extended support to the BNP to form government. In the 1996 elections, it nominated 300 candidates but won only three seats. But in 2001 it once again bagged 17 seats.

So how would one explain the BNP’s current altered stance? Former Election Commissioner, Brigadier M. Sakhawat Hossain, puts it all down to poll strategy. Says Maruf Mallick, political analyst and visiting research fellow at the University of Bonn, Germany, “The BNP was never interested in an alliance with the secularists… It was compelled to do so because party chief Khaleda Zia is in jail and there is a leadership crisis.”

Mallick asserts that the Awami League too has used religion in election campaigns before this. During the 1996 elections, the Awami League used a part of the Islamic Kalma, La Ilaha Illallah and rhymed it with Noukar Malik Tui Allah (Allah is the owner of boat) for its election slogan. (The boat is the election symbol of the Awami League.) In that campaign, a portrait of Hasina wearing a headscarf and holding a tasbih — a string of holy beads — was widely used in posters. According to Brigadier Hossain, the Awami League started to woo the anti-Jamaat Islamist groups in right earnest from 2001.

Political scientist Ali Riaz points out that the Awami League is indulging Hefajote Islam because it wants to bring the Islamist forces into its fold and deprive the Opposition of their support. Also, the party doesn’t want to look un-Islamic in a bid to be secular. “Hasina wants to bank on these Islamists who have the capacity to mobilise people especially Qawmi Madrasa students and teachers in large numbers,” says Riaz, who is also distinguished professor of Political Science at the United States’ Illinois State University.

There have been rumours that some members of Hefajote Islam wanted to contest elections but it didn’t happen because of a conflict between two factions of the group. Hefajote’s secretary-general Junaid Babunagri tells The Telegraph, “We are an apolitical organisation. We have no role to play in the elections.”

An Awami League supporter carries a photograph of Prime Minister Sheikh Hasina during an election rally in Dhaka.
(AP)

No matter what the official line, there can be no denying that Hefajote has benefited from having a sympathetic ruling party. To begin with, the government stopped pursuing cases against Qawmi Madrasa leaders — many of them had been accused of organising religious clashes, giving hate speeches against bloggers, threatening bloggers and molesting minors. Liberal thinkers, political opponents and human rights activists were targeted instead. Lawyer Sara Hossain stresses how even after a landslide victory in 2009 and initial pledges of zero tolerance for rights violations, the government didn’t live up to the principles of the Constitution. There were several cases of abuse of human rights; Hasina also resorted to regressive laws such as the Digital Security Act to attack free speech. Says Sara, “The government tried to segregate the country into two parts — people who are for the government and those against it. People who are against Hasina were labelled enemies of the state.” According to her, even now, the official narrative is — if you don’t support the Awami League, you don’t love your country and you are anti-Liberation.”

It must be understood that in Bangladesh, politics is always being played on the basis of who supported the Liberation movement of 1971 and who didn’t. Jamaat being an anti-Liberation force was always kept at an arm’s length by Hasina.

Jamaat had won two out of the 300 parliamentary seats in the 2008 elections. But its registration as a political party was cancelled in 2013. This time, some Jamaat members are fighting on the BNP symbol — the paddy sheaf — but by and large the BNP seems to be distancing itself from Islamists.

Nagorik Oikya is part of the 20-party alliance that includes the BNP. Says convener Mahmudur Rahman Manna, “In the past years, the BNP has been banking on its alliance with Jamaat to bring its Islamist supporters to the polls, but in doing so, it ignored the votes of non-Islamist constituents. This time, it was its strategy to join hands with our secular front to gain maximum advantage because nobody can ignore that there is an anti-incumbency factor against the Awami League and the next big political party is the BNP.”

“If you are talking about the BNP-Jamaat alliance, you are holding the wrong end of the stick,” says BNP leader Mirza Fakhrul Islam Alamgir. “There is a strong anti-Awami League sentiment among the people and we are only giving them a democratic alternative,” he tells The Telegraph over phone.

Both the Jamaat and Hefajote are problematic for Bangladesh, according to political scientist Riaz. “Hefajote Islam is more fanatic than Jamaat, even though there is no denial of the latter’s role in heinous war crimes,” he says. Then adds, “Jamaat is an opportunist Islamist party. It wants a political fight by staying within the secular democracy, unlike Hefajote, which is a regressive party and does not believe in the Constitution.”

Senior Awami League leader Amir Hossain Amu, says, “Hefajote Islam had no role to play in the Liberation War unlike Jamaat, which is internationally known for its role in war crimes.” He asks, “Also, one party [BNP] practiced communal politics for more than 21 years while in power, why don’t you talk about that?” He emphasises that none of the Islamic parties are part of “our grand alliance”. An Islamic Democratic Alliance, however, has been formed to support the Awami League .

No matter how Amu would like to explain away his party’s affiliations, it is evident that, on the one hand, Hasina waged a war against home-grown terror outfits, while on the other, she curried favour with the radicals. “One doesn’t need to organise terrorist attacks if one can radicalise society and Hefajote is doing it by interfering in policy-making,” says Manna of Nagorik Oikya.

Many local observers believe that Hasina’s survival tactics pose a threat to Bangladesh’s secular values and to freedom of religion and belief. Says journalist Dhar, “There is no space left for critical comments about religion. It is the radical Islamists who are shaping public discourse.”

Dhar and many others are afraid the country will be made to pay for this.