Modi must have meant the Congress, some of whose leaders had raised questions about the timing 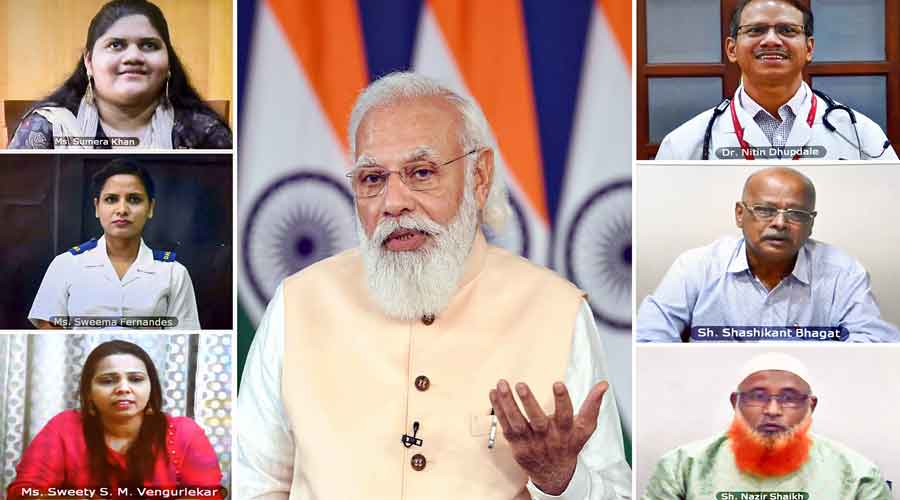 Fresh from his 71st birthday, Prime Minister Narendra Modi wise-cracked on Saturday that “a political party ran a fever” after India administered a record 22.6 million Covid vaccines on Friday.

Modi must have meant the Congress, some of whose leaders had raised questions about the timing.

But a break-up of the vaccination data suggests that several states run by the BJP or its friends did indeed experience feverish activity on Friday and relative drowsiness just before the surge in the administration of doses.

Six states ruled by the BJP or its allies accounted for 67 per cent of the over 22 million Covid-19 vaccine doses administered on Friday, and some showed dips in daily doses just before Friday’s record sharp rise. The final Friday figure was revised to 22.6 million on Saturday.

The number of doses administered in the six states — Assam, Bihar, Gujarat, Karnataka, Madhya Pradesh and Uttar Pradesh — on Friday ranged three-fold to 15-fold higher than their own average daily doses over the previous seven days, according to the vaccination data.

These six states account for 15.2 million of the 22.62 million doses administered across the country on Friday, coinciding with Modi’s birthday.

On Saturday, during a virtual interaction with health workers and vaccine recipients in Goa, Modi said without taking names: “More than 2.5 crore people were inoculated. Some of them experiencing side effects is known. But for the first time I have heard that after midnight yesterday, a political party experienced a reaction, it ran a fever.”

The session was seen as an attempt to build on the campaign the BJP has launched to bolster the government’s image scarred during India’s second Covid-19 wave.

“Birthdays come and go. I have stayed aloof from such things. But yesterday was emotional for me, an unforgettable occasion,” Modi added.

In Bihar, Gujarat and Karnataka, the daily doses administered one to three days prior to Friday’s record rise fell below their own seven-day averages, in line with suggestions by some health experts that authorities are orchestrating the vaccination campaign for dramatic effects.

“We don’t have anything in social science that can explain why six million people sought vaccines on Thursday, over 22 million on Friday, then only 8 to 10 million on Saturday,” Rijo John, a health economist and adjunct professor at the Rajagiri College of Social Sciences, Kochi, told The Telegraph. Nearly 8.4 million doses were administered on Saturday.

John and other experts tracking the vaccination campaign said the demand for jabs would be expected to display an overall rising trend with minor fluctuations — as more and more people seek inoculation — until the drive approaches completion or encounters hesitancy.

“It can’t be that 2 crore people realised one day they want the vaccine. If awareness has abruptly grown across society, that momentum should continue,” John said. “We don’t see that. This can only mean the sharp rises are carefully planned.”

A health official involved in the vaccination campaign had told this newspaper on Friday that such sharp spikes in daily doses were facilitated by an increase in the number of vaccination centres activated.

The official said such large abrupt increases needed preparations through at least two weeks of planning during which vaccines, staff and recipients need to be mobilised.

Karnataka showed the sharpest rise on Friday compared with its average over the previous seven days, administering 3 million doses, a 15-fold increase over its average of 199,000 doses from September 10-16. The state had administered only 81,000 doses on Thursday and 185,000 doses on Wednesday.

Uttar Pradesh on Friday administered over 2.8 million doses, a three-fold increase over its immediate 7-day average of 839,000 doses.

Except for Maharashtra and Rajasthan where Friday’s counts increased two to three times their 7-day average, several non-BJP states did not show similar sharp spikes. Bengal had administered 402,000 doses on Friday, close to its immediate 7-day average of 431,000 doses. In Delhi, around 153,000 people received doses on Friday, compared with an average of 126,000 daily doses over the previous seven days.

“Such sudden spurts are likely to require massive efforts to mobilise recipients — how this is done over how many days is unclear,” a public health expert not associated with the vaccination campaign said.

The campaign had administered over 14 million doses on August 31 and nearly 12 million doses on September 6. A health official has said more such surge days should be expected as the number of available doses increase in the coming weeks.

Modi mum on Taliban but vocal