The PM is expected to hold bilateral meetings on the sidelines of the meet with Putin, Uzbek President Shavkat Mirziyoyev and Iranian President Raisi 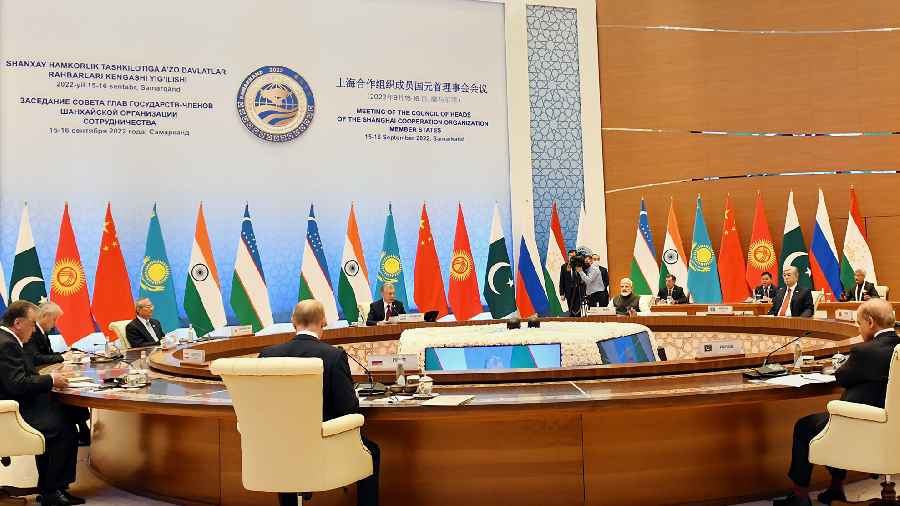 Prime Minister Narendra Modi on Friday called upon SCO member states to give transit access to each other and pitched for boosting connectivity for ensuring resilient supply chains for the region.

In his address at the SCO summit in this historic city, Modi also said that India's economy is expected to grow at 7.5 per cent this year, which will be the highest among the world's major economies, PTI reports from Samarkand.

Modi said there is a need for the Shanghai Cooperation Organisation (SCO) to develop reliable, resilient and diversified supply chains in the region in the backdrop of disruptions caused by the Covid-19 pandemic and the Ukraine crisis.

Modi's call for providing transit access comes amid Pakistan's reluctance to give India such facilities for sending goods to war-torn Afghanistan.

He said that India supports mutual trust and cooperation among SCO countries.

"The pandemic and the crisis in Ukraine have caused many disruptions in global supply chains, leaving the world facing unprecedented energy and food crises," he said.

"The SCO should strive to develop reliable, resilient and diversified supply chains in our region. For this, better connectivity will be required, as well as it will also be important that we all give full rights of transit to each other," he said.

The Prime Minister said that the government is making progress in making India a manufacturing hub. "There is a lot of focus on the proper use of technology in our people-centric development model," he said.

"We are working towards transforming India into a manufacturing hub...We are supporting innovation in every sector. Today there are more than 70,000 start-ups and over 100 unicorns in our country," he said.

On tackling the challenges of food security, he spoke of India's efforts to popularise millets as an alternative and cheap option.

My remarks at the SCO Summit in Samarkand. https://t.co/6f42ycVLzq

Earlier, Modi, Russian President Vladimir Putin, Chinese President Xi Jinping and other leaders of the SCO deliberated on the regional security situation and  other issues.

It is for the first time Modi and Xi came face-to-face at the summit in this historic Uzbek city since the start of the border standoff between India and China in eastern Ladakh around 28 months back.

However, there is no clarity yet on whether there will be a bilateral meeting between Modi and Xi on the sidelines of the summit, reports PTI.

The summit of the eight-nation influential grouping is taking place amid the growing geo-political turmoil largely triggered by the Russian invasion of Ukraine and China's aggressive military posturing in the Taiwan Strait.

Ahead of the deliberations at the restricted format of the summit, leaders of the permanent members of the grouping posed for a group photo at Samarkand's Congress Centre.

At the venue of the summit, Modi was warmly greeted by Uzbek President Shavkat Mirziyoyev.

"President Shavkat Mirziyoyev of Uzbekistan welcomed PM@narendramodi to the Congress Centre in Samarkand for the 22nd SCO Summit. India has been working closely with Uzbekistan towards the success of their Chairship," External Affairs Ministry Spokesperson Arindam Bagchi tweeted.

In another tweet, he said:"PM @narendramodi joins the leaders of SCO Member States for discussions on topical, regional and international issues, including regional peace and security, trade and connectivity, culture and tourism."

At the SCO Summit, also emphasised on tackling the challenge of food security. In this context, also talked about India's efforts to further popularise millets. SCO can play a big role in marking 2023 as International Year of Millets.

Modi arrived here on Thursday night on an around 24-hour visit.

Hours before departing for Samarkand, Modi said he was looking forward to exchanging views at the summit on topical regional and international issues as well as on reform and expansion of the grouping

"At the SCO Summit, I look forward to exchanging views on topical, regional and international issues, the expansion of SCO and further deepening of multifaceted and mutually beneficial cooperation within the Organisation," Modi said in a statement.

"Under the Uzbek chairship, a number of decisions for mutual cooperation are likely to be adopted in areas of trade, economy, culture and tourism," he said.

The SCO was founded at a summit in Shanghai in 2001 by the presidents of Russia, China, the Kyrgyz Republic, Kazakhstan, Tajikistan and Uzbekistan.

Over the years, it has emerged as one of the largest trans-regional international organisations. India and Pakistan became its permanent members in 2017.

Iran is likely to be given the status of a permanent member of the SCO at the Samarkand summit.

Modi at SCO summit, to hold talks with Putin