Advertisement
Home / India / Plan for nuclear-driven carrier with US help

Plan for nuclear-driven carrier with US help

India's navy has all but finalised plans for a nuclear-powered super-carrier, which is scheduled to be built in Kochi with US help. 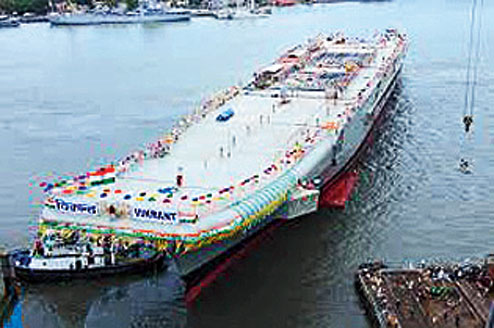 Goa, May 15: India's navy has all but finalised plans for a nuclear-powered super-carrier, which is scheduled to be built in Kochi with US help.

In preparation for the long-gestation project, estimated for the year 2028, the navy is setting up the building blocks that will identify the aircraft to be based on the carrier, called the Vishal (to be pre-fixed with "INS" on commissioning).

Nuclear energy enables a carrier to sail for months without needing to dock for refuelling. The navy wants a nuclear-powered carrier for "longer sea legs", to enhance its reach beyond territorial waters.

It has determined that the carrier will need a nuclear reactor generating 180MW for propulsion, and may go for two reactors of 90MW each. Talks with the Bhabha Atomic Research Centre (Barc) are at an advanced stage.

The Vishal is being designed to be between 60,000 and 70,000 tonnes. (India's first carrier, the INS Vikrant, displaced 18,000 tonnes. The second, soon-to-be decommissioned INS Viraat, 24,000 tonnes. Both were of British origin. The operational INS Vikramaditya displaces 45,000 tonnes. It is of Russian origin.)

The navy has bolstered its case for a nuclear-powered carrier by citing the nuclear deals India has signed not only with the US but also with Japan and Germany, albeit for peaceful uses of nuclear technology.

The navy chief said in Goa earlier this week that the government was yet to freeze the design and specifications for the Vishal.

In official papers, the Vishal is described as the IAC (indigenous aircraft carrier) II. The IAC I, called the Vikrant after India's now-decommissioned first carrier, is due in 2018. It was launched in 2014.

"We are setting up the naval test flying team in INS Hansa to evaluate potential and future aircraft: to evaluate everything from aircraft to weapons," said Commodore Raghunath Nair, commanding officer of naval air station Hansa.

"The navy now has 240 aircraft but not enough infrastructure. We are finding an energetic response from the government to the plans."

The navy had invited preliminary inquiries from foreign entities for the design and development of the Vishal: DCNS of France, Rosoboronexport of Russia, Lockheed Martin of the US. Within the top brass, however, there is now a congealing of opinion that the US option may be the one to go after.

This is as much because of the technology regime that India promises to enter following the nuclear deals as because the US is actually operating carriers and building them, the latest being the Gerald R Ford class.

"We've practically written the carrier operations manual for the Russians," said one officer. He pointed to the Russian navy ordering the MiG29K fighter aircraft after India bought the planes from them.

The MiG29K are now operational with the INS Vikramaditya (the Admiral Gorshkov, which too was bought from Russia).

The Chinese, who also reconverted a Russian vessel to get their carrier, the Liaoning, are yet to commission the vessel.

"We have an institutionalised memory of carrier operations since 1961. Of this much we are sure - we are far ahead of the Russians and Chinese in carrier operations. But now it is time we go for the new carriers. And the US is practically the only one building them," the officer said.

India and the US have a joint working group on sharing, and possibly co-producing, the electromagnetic aircraft launch system that is going into the USS Gerald R Ford.

"In the Arihant (the Indian nuclear submarine now in sea trials) we have gained, with some Russian help, the ability to develop a reactor for our purpose. Barc is confident that it can build for the carrier too," the officer said.

In February, the US chief of naval operations, John Richardson, had said about talks with India that "we are making very good progress".

"I am very pleased with the progress to date and optimistic we can do more in the future. That's on a very solid track," Richardson had added.

The Indian navy is fairly certain that it does not want the indigenously built light combat aircraft (navy) for the Vishal. The IAC II has been planned as a catobar (catapult-assisted take-off and arrested recovery) that would launch aircraft with a catapult powered electromagnetically.

The only operational carrier now is the Vikramaditya. At 45,000 tonnes it has a flight deck that is still too small for the new dimensions of carrier operations the navy is envisaging from the Vishal, the officer said.

The light combat aircraft (navy) that has been in the making with Hindustan Aeronautics Limited for 25 years has only done ramp take-offs in trials so far and "no traps" (or arrested recovery) yet.

A possible fighter aircraft to be based on the Vishal would be in the category of an advanced medium combat aircraft that is being designed by the Aeronautical Development Establishment under the Defence Research and Development Organisation.

But the navy believes the advanced medium combat aircraft too would need a foreign (western) partner to make the jump from the design to the series-production stage.