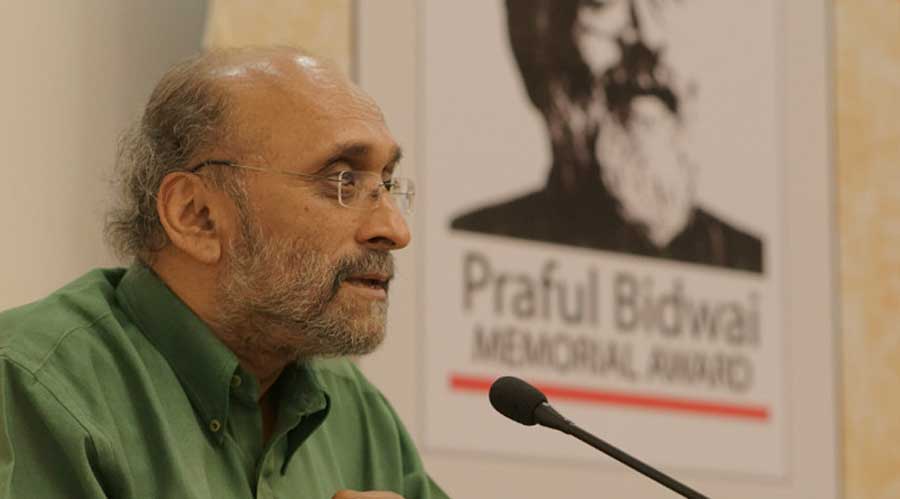 Veteran journalist Paranjoy Guha Thakurta, whose phone was among those infected with the Pegasus spyware, on Monday moved the Supreme Court, saying the snooping “will stop confidential informants and whistleblowers from coming forward and bringing to light wrongdoing at various levels of government”.

Guha Thakurta, a former member of the Press Council of India, urged the apex court to declare the action as “unconstitutional” and direct the Centre to set up a “judicial oversight” mechanism to prevent such breach of citizens’ privacy.

In his petition, Guha has said the illegal surveillance would have a chilling effect on the right to free speech in India. “Further, the petitioner apprehends that the Pegasus attack on him and other journalists in India will stop confidential informants and whistleblowers from coming forward and bringing to light wrongdoing at various levels of government and as such, have a detrimental effect on transparency in governance all across India.

“The present petition raises tremendously important questions of constitutional interpretation, particularly with respect to the extent of the right to privacy the due process of law pertaining” its deprivation.

The petition added: “These questions are so urgent and fundamental in nature and have such a profound effect on the lives of all the citizens of India that the petitioner is of the view that it is only proper to take the extreme step of approaching this Hon’ble Court directly under Article 32 (enforcement of fundamental right) jurisdiction.”

Guha Thakurta is the first “aggrieved person”, whose personal phone was kept under surveillance, to move the top court on the Pegasus controversy.

Rupesh Kumar Singh, a freelance journalist based in Jharkhand, has also approached the court with a plea to declare the spyware illegal. The phone number of Rupesh, who had reported on violence on Adivasis by security forces and who was jailed on alleged trumped-up charges,  and that of his two family members figure in the leaked list of potential targets of surveillance.

An advocate, two journalists and an MP have already moved the court on the snooping operation. These three  petitions have been listed for hearing on Thursday before a bench of Chief Justice N.V. Ramana and Justice Surya Kant.

Guha Thakurta, in his petition filed through advocate Prateek K. Chadha, has sought the following directives:

⚫ Declare the installation and/or use of malware or spyware such as Pegasus as illegal and unconstitutional.

⚫ Issue a directive to the Centre to produce and disclose all materials and documents on the investigation, authorisation and orders on the use of Pegasus on the petitioner.

⚫ Direct the Union government to take suitable steps to protect Indian citizens from the use of cyber weapons/malware such as Pegasus.

⚫ Direct the Centre to put in place a judicial oversight mechanism to deal with any complaints on illegal breaches of privacy and hacking and punish all government officials responsible for such breaches.

The petition said that between 2017 and 2019, about 50,000 phone numbers across the world were targeted by the malware.

“The list of these numbers comprised 300 verified Indian numbers which had been targeted by the Pegasus malware, of which one belongs to the petitioner herein. The Pegasus Project assisted the supposed targets to discern the presence of the malware on their phones.

“The petitioner being a senior journalist, was provided with aid in this regard. Amnesty International’s Security Lab examined his mobile device and found forensic traces of the malware operating on his phone, which confirmed the surveillance,” the petition said.

The petitioner noted that despite the raging controversy over Pegasus,  the Centre so far has not categorically stated whether it had deployed the malware to carry out the  hacking and surveillance.

“The respondent authorities also failed to unequivocally deny the fact that they had purchased/obtained the Pegasus malware from NSO and/or the state of Israel.

“The petitioner, therefore, has strong reasons to believe that he has been subjected  to a deeply intrusive surveillance and hacking by the Government of India or some other third party. Consequently, he perceives that his rights to privacy, the access to information and his freedom as a journalist have been violated,” the petition said.