Pegasus: 14 parties vow to fight the spyware battle together 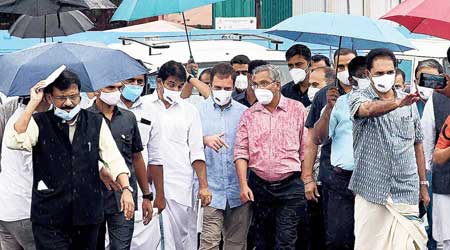 As many as 14 parties stood shoulder to shoulder on Wednesday and vowed to fight the Pegasus battle together, less than 24 hours after Prime Minister Narendra Modi sought to drive a wedge in the Opposition by singling out the Congress as the disruptor of parliamentary proceedings.

The monsoon rain in the capital provided a political metaphor with Opposition leaders sharing umbrella space as they marched around 2km from Parliament to Vijay Chowk.

“The entire Opposition is standing here today because our voice is suppressed inside Parliament,” Congress MP Rahul Gandhi said, addressing the media with the leaders of 13 other parties. Trinamul Congress members were absent, but the party is with the rest of the Opposition on the Pegasus controversy.

The others present said the Opposition would fight the battle together. In recent memory, so many Opposition voices have not spoken from under the same umbrella — so to speak — in the capital, certainly not the day after the Prime Minister himself had tried to divide them.

On Tuesday, Modi had told the BJP MPs to “expose the Congress before the people and the media”, saying it was not allowing Parliament to function. The Prime Minister had glossed over the fact that other Opposition parties like the DMK, Trinamul Congress and the Left were also protesting and stalling Parliament.

At Vijay Chowk on Wednesday, the Samajwadi Party’s Ram Gopal Verma responded to Modi’s charge. “There can’t be a bigger lie than the government’s claim that the Opposition doesn’t want Parliament to function,” Verma said.

“We are demanding a discussion, giving notices every day, but the government says, ‘No discussion on Pegasus’. The Pegasus snooping can steal our military secrets. We must have a structured debate,” he added.

The Shiv Sena’s Sanjay Raut said: “As Rahulji said, they have attacked our democracy. It’s a betrayal, it’s back-stabbing as they did it on the sly. This is a national security issue and if this will not be discussed in Parliament, what else (would be)?”

NCP lawmaker Supriya Sule alleged that the government had snooped on the wives and children of ministers. The CPI’s Binoy Viswam compared the alleged surveillance regime to Hitler’s Germany.

The Rashtriya Janata Dal’s Manoj Jha wondered how the government could brush aside the opinion of parties that represented 60 per cent of the population. He said the people would find a way out if the government failed to act democratically.

DMK leader T.R. Balu too countered the government allegation that the Opposition didn’t want any discussion, saying the treasury benches wanted to use Parliament only for their own business.

It is too early to say whether the consensus on the Pegasus controversy would become the launch pad for a more durable understanding in the months to come. But the parallel with the Bofors-era Opposition mood -– when concerted action that germinated in Parliament had flowered into a wider backlash against the then government -– was hard to miss.

Rahul said the government’s refusal to allow a parliamentary discussion on the Pegasus controversy suggested it had done something “dangerous for the country”.

“Narendra Modi and (home minister) Amit Shah have hit the soul of India’s democracy. They are not allowing a discussion in Parliament because it is obvious the government has done something wrong, something which is dangerous for the country,” the former Congress president said. “Otherwise, they would have said, ‘Come, let’s have the discussion’.”

The Opposition leaders were talking to the media after a concerted move by all the Opposition parties in Parliament had failed to get the government to agree to a discussion on the controversy.

The Pegasus Project media exposé suggests that the phone numbers of many politicians, judges, rights activists, journalists and other Indians were earmarked for potential hacking and some were indeed hacked through the Israeli spyware Pegasus, which is sold only to governments.

Rahul said: “I want to ask the youth of India --- Modi has inserted a weapon in your phone. That weapon was used against me, against other leaders, against the Supreme Court, activists, media. Why should this issue not be allowed to be discussed in Parliament?

Rahul went on: “We are being accused of disrupting Parliament. We are only doing our duty. If we agree to take up other issues, the Pegasus issue will be over.

“For us, Pegasus is related to nationalism. What has been done is treason. Modi and Shah have committed an anti-national act.... This is not merely a privacy issue. We want a discussion which should be replied to by either the Prime Minister or the home minister, and (we want) a Supreme Court-monitored inquiry.”