The winter session of Parliament will start on November 18 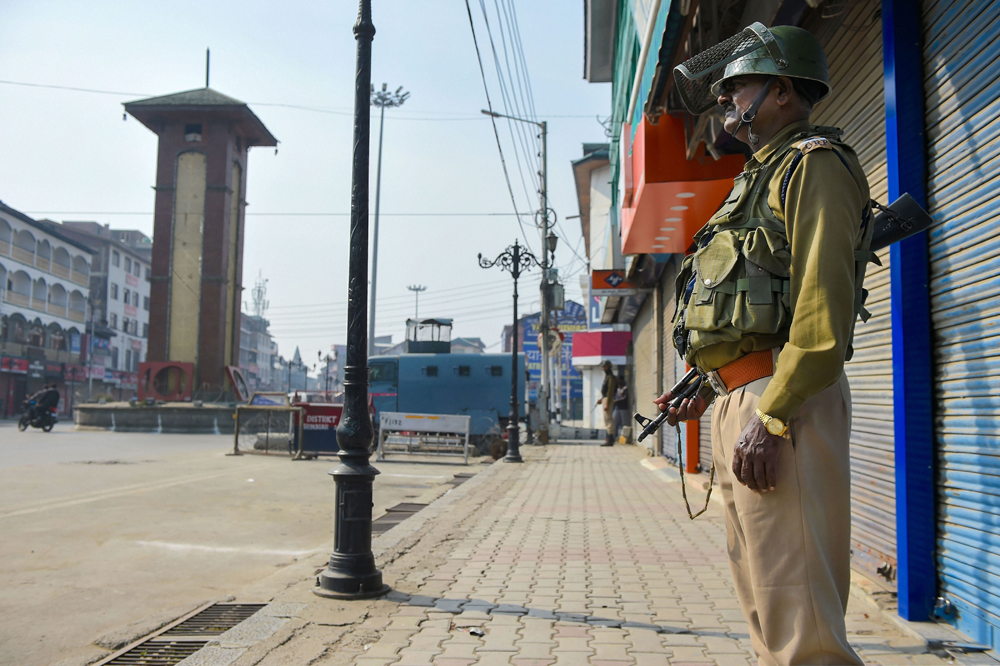 A trooper stands guard at Lal Chowk in Srinagar on Tuesday, the day of the visit by an unofficial delegation of members of the European Parliament
(PTI photo)
Our Special Correspondent   |   New Delhi   |   Published 29.10.19, 09:26 PM

The Congress is gearing up to haul up Prime Minister Narendra Modi in Parliament for the “national embarrassment” caused by the disastrous decision to facilitate the visit of an unofficial delegation of members of the European Parliament to Jammu and Kashmir.

“Apart from the severe economic crisis, this diplomatic and political blunder will be the main issue in Parliament. We will draw up a common strategy in consultation with other Opposition parties. Allowing legislators from outside to visit Kashmir when Indian parliamentarians are sent back from Srinagar airport is intolerable,” a key Congress strategist told The Telegraph.

The winter session of Parliament will start on November 18. The Congress leadership believes the government demonstrated lack of tact and wisdom by involving itself in the visit while it had disallowed Indian parliamentarians, stirring a genuine question of sovereignty.

The Opposition leaders are seeing this as an opportunity to drag down the government from the high horse of revocation of Article 370, which was craftily portrayed as the completion of Kashmir’s integration with India.

While the European MPs were granted audience with the Prime Minister, national security adviser Ajit Doval also hosted them. The Congress believes every member of the Lok Sabha and the Rajya Sabha should take up this matter seriously as it is not only a question of their rights, but it also suggests that the government has greater trust in foreigners than in the elected representatives of India.

While the Congress had questioned the BJP’s nationalism on Monday, many leaders offered a more substantive critique on Tuesday, asking if this reckless action wasn’t going to internationalise the Kashmir issue.

Anand Sharma, the head of the party’s foreign department, tweeted: “The government embarked on an ill-advised PR exercise, sponsoring individuals with questionable credentials. European Union MPs representing parties and ideologies in direct conflict with the mainstream. Diplomatic disaster which ended up internationalising what is essentially our internal issue. National embarrassment. Those responsible should be held accountable.”

The party posted this message on its Twitter handle: “Is this the nationalism BJP propagates? Allowing foreign intervention and assessment in internal matters, while banning Indian lawmakers from travelling freely?”

Senior leader Ahmed Patel tweeted: “Now that the Government is playing host to privately-sponsored European Union MPs visiting Kashmir, how about being little patriotic and allowing a delegation of Indian MPs — elected by the Indian people — to visit J&K?”

Former information and broadcasting minister Manish Tewari took a dig at the government by saying “Indian MPs should perhaps consider getting elected to European Parliament to be able to visit J&K that the government claims was integrated into India without firing a single bullet. Was J&K enemy/alien territory before August 5, 2019? Has it not been an inalienable part of India since 1947?”

Referring to the background of the visiting MPs, Tewari tweeted: “This is interesting if true. Right wing populists! You scratch my back & I will caress yours. Worth checking it their political credentials each one them.”

Rahul Gandhi had tweeted on Monday night: “MPs from Europe are welcome to go on a guided tour of Jammu & Kashmir while Indian MPs are banned and denied entry. There is something very wrong with that.”