'I am who I am because of the people, especially the common farmer' 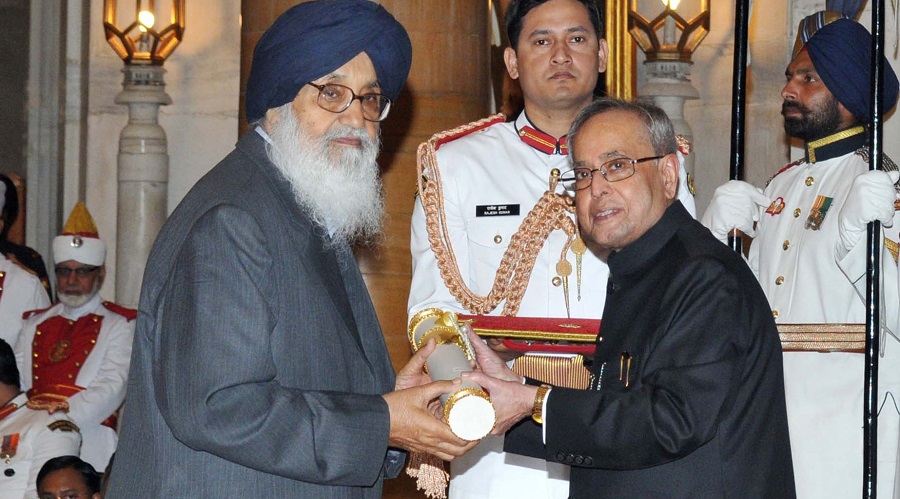 In a separate announcement, dissident Akali leader and Rajya Sabha member Sukhdev Singh Dhindsa also said he will return the Padma Bhushan conferred on him last year. Earlier, some former Punjab sportsmen too have threatened to return their awards.

Badal's move follows over two months after his Shiromani Akali Dal pulled out of the BJP-led National Democratic Alliance (NDA) at the Centre, protesting against the three laws which deregulate the sale of crops.

His daughter-in-law Harsimrat Kaur Badal had also quit the Union Cabinet as protests over the farm bills erupted in Punjab, where the party is in opposition.

I am who I am because of the people, especially the common farmer. Today when he has lost more than his honour, I see no point in holding on to the Padma Vibhushan honour, Badal said in his letter to President Ram Nath Kovind.

Rebel SAD (Democratic) leader Sukhdev Singh Dhindsa said farmers including the elderly and women are staying put at the Delhi borders. We are also the sons of farmers. What will we do with the award? We stand shoulder to shoulder with them.

A SAD statement said Parkash Singh Badal returned the Padma Vibhushan in protest against the betrayal of farmers by the central government, and the shocking indifference and contempt with which it is treating the peaceful and democratic agitation of the farmers.

Thousands of farmers from the state are now camping at the border of Delhi, demanding the repeal of the three Acts that they say will lead to the phasing out of the minimum support price (MSP) system, which the government denies.

In a letter e-mailed to the President Thursday morning, Badal said, After Panthic ideals of peace and communal harmony, farmers have been my second religious passion.

Everything I have, everything I take pride in, every moment of glory or every office of public service that has been bestowed on me during my long public career has been pure because of my commitment to these ideals in which farmers have remained at the centre of everything, the five-time former chief minister wrote.

When the country honoured me with Padma Vibhushan, I knew that it was only in acknowledgement of my commitment to the people in which the farmers featured most prominently. I owe it to them, he said.

As an optimist, he hoped that the President would use his good offices to tell the government to win the confidence of farmers as well as strengthen the country's secular, democratic fabric.

Hurt and betrayed, the SAD leader said when the Union government brought in the farm ordinances, there were assurances that the farmers' apprehensions will be addressed while introducing the relevant Bills.

Trusting these assurances, I even appealed to the farmers to believe the government's word. But I was shocked when the government simply went back on its word, he wrote.

The former CM described the period after the betrayal as the most painful and embarrassing moment in his political career.

"I just cannot put in words the pain and emotional stress which I have been going through since then. I have truly begun to wonder why has the government of the country become so heartless, so cynical and so ungrateful towards the farmers," he said.

Badal said he was deeply pained by the communal insinuations being made against the protesting farmers, and by the conspiracies and vicious propaganda to paint their peaceful struggle as anti-national.

Badal described the black laws as the proverbial last nail in the coffin of the country's 'anna data'.

The farmers are out on the streets battling police batons, tear gas shells and water cannons even as their sources of livelihood dry up.

They have come to the national capital from all over the country, leaving their fields, crops and even their families and travelled long distances to get the attention of their own government, he said.