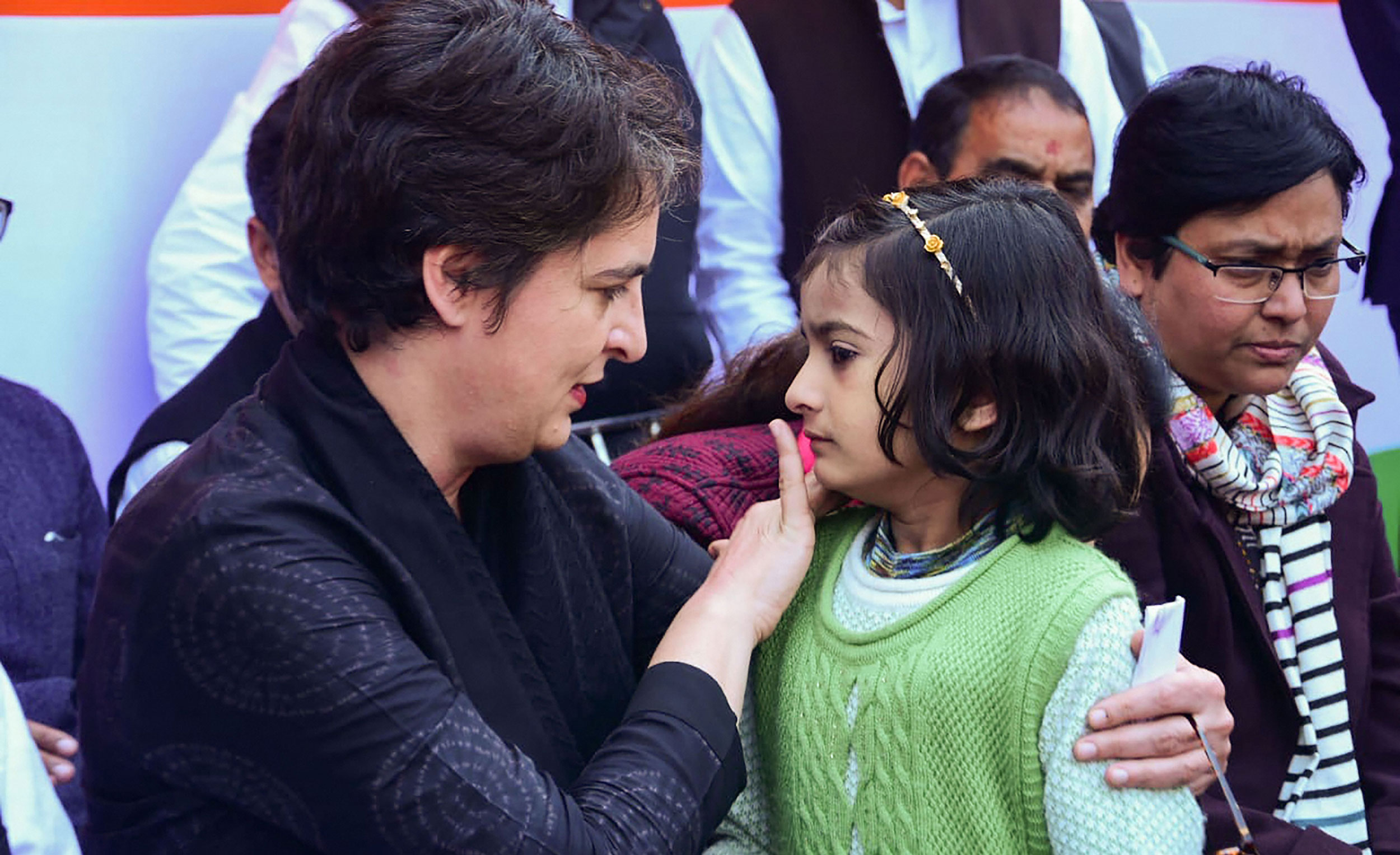 Priyanka Gandhi Vadra interacts with a girl while meeting with women who have been agitating against the Citizenship Amendment Act and National Register of Citizens (NRC), at Bilariyaganj in Azamgarh.
(PTI)
Piyush Srivastava   |   Lucknow   |   Published 17.02.20, 08:08 PM

A panel set up by some social workers and lawyers in Uttar Pradesh to look into alleged police atrocities on protesters against the new citizenship triad has slammed the law enforcers for their “barbaric” crackdown on women and children in Bilariyaganj, Azamgarh, on February 5.

The panel — Uttar Pradesh Coordination Committee — also rubbished police claims that the women had pelted them with stones.

“The violent action of the police on peacefully and non-violently protesting women and children was a cowardly move. Firing rubber bullets, tear gas, barbaric baton-charge was not only murder of democracy but also an attack on India’s civilisation and culture,” Sandeep Pandey, a member of the committee, said, reading from a report the panel released in Lucknow on Monday.

Pankaj Pandey, SP, Azamgarh, had claimed the women threw stones at the police, prompting them to use mild force to disperse the protesters.

Nearly 2,000 women and some children had gathered at Maulana Jauhar Ali Park in Bilariyaganj town, 20km north of Azamgarh city, on the evening of February 4.

Around 4am on February 5, some of the protesters alleged later, policemen and policewomen began throwing stones at them, hit them with batons and fired tear gas. The police, they said, had also brought over water tankers and flooded the park.

Among the panel members who visited Bilariyaganj was Ramesh Kumar, a lawyer Allahabad High Court had recently appointed amicus curiae to assist it in a case related to incidents of violence on December 19 and 20 when protests against the Citizenship (Amendment) Act, National Register of Citizens and the National Population Register had broken out across the state.

According to reports, 23 people had died in police action at that time.

Kumar said he would submit the Bilariyaganj panel’s findings too, besides other reports, when the high court again hears the case related to the December violence.

Sandeep Pandey recalled what eyewitnesses had told the fact-finding team. “According to eyewitnesses, the women had started a peaceful protest at Jauhar Ali Park in Bilariyaganj on February 4. There were children and old women with them. The police barbarically suppressed the dharna. Many women sustained injuries. An old woman, Sarvari Begum, is still in hospital. The police arrested 19 people, including some Class X and Class XII students,” Pandey said.

“The arrested people include Maulana Tahir Madni, who was roped in by the Azamgarh administration to convince the women to suspend their protest. The police arrested Madni at 1am when the women refused to listen to him. The police turned violent against the women and children thereafter.”

The social worker also alleged that the police booked two youths, Nurul Hoda and Mirza Shane Alam, who were not part of any protest and didn’t even visit the dharna site.