Pakistan an 'arsonist' disguising itself as a 'fire-fighter', India tells UN 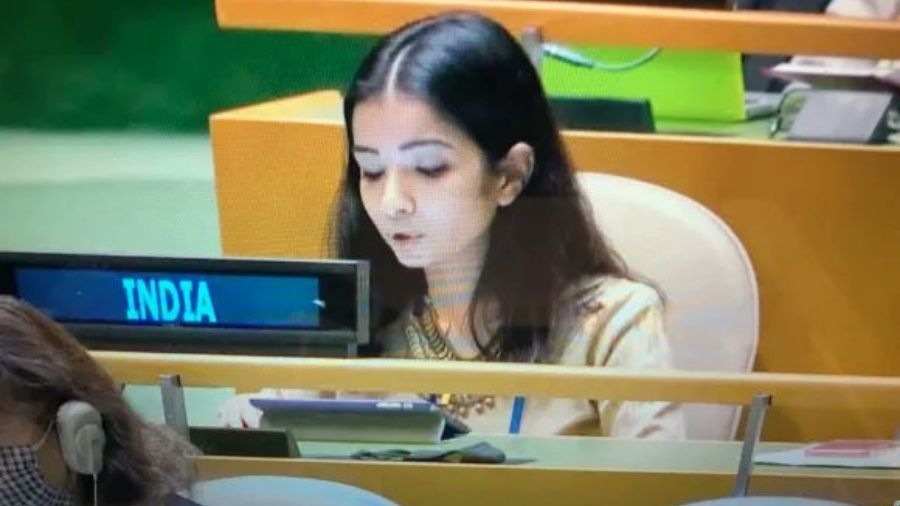 Pakistan, where terrorists enjoy free pass, is an "arsonist" disguising itself as a "fire-fighter", and the entire world has suffered because of its policies as the country nurtures terrorists in its backyard, India has said in a blistering retort after Prime Minister Imran Khan raked up the issue of Kashmir in his address to the UN General Assembly.

"We exercise our Right of Reply to one more attempt by the leader of Pakistan to tarnish the image of this august forum by bringing in matters internal to my country, and going so far as to spew falsehoods on the world stage," First Secretary Sneha Dubey said in the UN General Assembly on Friday.

"While such statements deserve our collective contempt and sympathy for the mindset of the person who utters falsehood repeatedly, I am taking the floor to set the record straight," the young Indian diplomat said, slamming the Pakistani leader for raking up the Kashmir issue in his address to the 76th session of the UN General Assembly.

"We keep hearing that Pakistan is a 'victim of terrorism'. This is the country which is an arsonist disguising itself as a fire-fighter. Pakistan nurtures terrorists in their backyard in the hope that they will only harm their neighbours. Our region, and in fact the entire world, has suffered because of their policies. On the other hand, they are trying to cover up sectarian violence in their country as acts of terror," Dubey said.

Khan in his address had spoken about the August 5, 2019 decision of the Indian government on the abrogation of Article 370 as well as the death of pro-Pakistan separatist leader Syed Ali Shah Geelani.

In the Right of Reply, Dubey strongly reiterated that the entire Union Territories of Jammu & Kashmir and Ladakh "were, are and will always be an integral and inalienable part of India. This includes the areas that are under the illegal occupation of Pakistan. We call upon Pakistan to immediately vacate all areas under its illegal occupation".

Khan and other Pakistani leaders and diplomats have consistently raked up the issue of Jammu and Kashmir and other internal matters of India in their addresses to the UN General Assembly and other forums of the world organisation. Pakistan's attempts to internationalise the Kashmir issue have gained no traction from the international community and the Member States, who maintain that Kashmir is a bilateral matter between the two countries.

In Washington, Indian foreign secretary Harsh Vardhan Shringla also noted that Pakistan, which has been projecting itself as a facilitator, has been in many senses an instigator of some of the problems that India has been dealing with in its neighbourhood.

Both during the India-US bilateral meeting by Prime Minister Narendra Modi and US President Joe Biden and the Quad summit comprising Australia, India, Japan and US, there was a clear sense of a more careful look, examination and monitoring of Pakistan's role in Afghanistan, Shringla said as the Indian delegation concluded its two days of hectic engagements in the city.

"Both in the bilateral discussions as well as in the forum discussions there was the clear sense that a more careful look, and a more careful examination and monitoring of Pakistan's role in Afghanistan. Pakistan's role on the issue of terrorism, had to be kept, and that certainly weather it is Quad or its other partners have to keep track of that factor," Shringla told reporters at a news conference here on Friday.

"An important factor which sometimes gets overlooked is when you see Pakistan, protecting itself as a facilitator, whereas, it has really been in many senses an instigator of some of the problems that we're dealing with in our neighbourhood and beyond," he said in response to a question.

Shringla said during the bilateral discussions at the While House, there was a clear concern expressed on Pakistan's role in Afghanistan and the continuing support for an approach that did not seem to be conducive to the international community's expectations of what the war-torn country should be like. "Both India and the United States agreed that the issue of terrorism is very important. Both sides denounced any use of terrorist proxies and emphasised the importance of denying the logistical, financial or military support to terrorist groups, which could be used to plan, or launch terror attacks," he said.

The leaders also noted that the US and India will be organising a counter-terrorism joint working group meeting designation dialogue and there is also going to be a renewed US India Homeland Security dialogue in the areas of law enforcement, he said.

Noting that there was quite a bit of discussion on Afghanistan, Shringla said that there was a lot of importance attached to the fact that the United Nations resolution 2593 was adopted and India's Presidency of the Security Council. "This is an important resolution which reflected the international community's general view on the situation in Afghanistan and the obligations of the ruling dispensation there to fulfill certain conditionalities that the international community faced are important," he said.

"So, the two sides underscored the importance of combat and terrorism in Afghanistan. They called on the Taliban to adhere to these and all of its commitments under resolution 2593. That includes, obviously the issue of ensuring that the Afghan territory is not used to threaten attack against any country, shelter any terrorist groups or finance terrorist attacks and underscores the importance of combating terrorism in Afghanistan," he said.

"This is an important point. I think the fact that the current ruling dispensation did not appear to be an inclusive one, did not involve the ethnic minorities of Afghanistan to the extent that it should, that it did not did not include participation of women," he said.