The use of these drones will aid in fulfilling the government's resolve of 100 per cent vaccination: Jitendra Singh 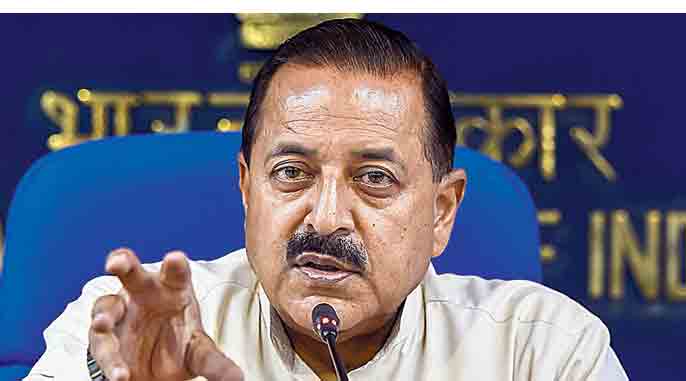 Unlike Pakistan which uses drones to drop weapons and further terrorism in Indian territory, India uses its drones to serve humanity, Union Minister Jitendra Singh said on Saturday at the launch of operations of an unmanned aeriel vehicle to deliver COVID-19 vaccines to areas along the international border in Jammu and Kashmir.

The indigenously built medium-class multicopter unmanned ariel vehicle (UAV) took off from the CSIR-Indian Institute of Integrative Medicine Complex here and successfully delivered 50 vials of COVID-19 vaccines along with syringes to a public health centre in Jammu's Marh area near the India-Pakistan border.

"Pakistan is using drones to drop explosives to cause harm to human life and further terrorism, but our drone will act as a carrier of 'Sanjeevani Boti' for the betterment of humanity and is going with a message of peace," Singh, who is Union minister of state in the Prime Minister's office, said.

He said health workers engaged in COVID-19 vaccination are facing problems in reaching families in remote and mountainous regions, and difficult terrains of Jammu and Kashmir, Uttarakhand, Himachal Pradesh, Arunachal Pradesh and elsewhere.

The use of this type of drones will be of great help and also aid in fulfilling the government's resolve of 100 per cent vaccination, Singh said.

The GPS-guided beyond visual line of sight (BVLOS) Octacopter UAV has been developed by the National Aerospace Laboratories (NAL), a constituent of the Council of Scientific and Industrial Research (CSIR), and has a range of 55 kilometres, an official said, adding that it can carry a payload of 20 kilograms.

The UAV is integrated with a powerful on board embedded computer and latest generation sensors for versatile applications like agricultural pesticide spraying, crop monitoring, mining survey and magnetic geo-survey mapping, he said.

On restrictions on use of drones in Jammu and Kashmir, the minister said there is no need to be concerned as all necessary security measures have been taken and permissions sought from authorities concerned.

Jammu and Kashmir witnessed a spurt in drone activities from Pakistan over the past one year with terrorists using the technology to drop bombs at an Indian Air Force (IAF) station in Jammu in June.

Following the bombing, authorities ordered ban on storage, sale or possession, use and transport of the flying machines in various districts. Singh, who is also the vice president of CSIR, said it is a proud moment for the country as the Mangalore-born drone will be used as a new "Covid-warrior" in the fight against the pandemic.

"After the country reached the successful milestone of 100 crore vaccinations under the leadership of Prime Minister Narendra Modi, he came out with the 'Har Ghar Dastak' Covid-19 inoculation campaign. This device will prove very beneficial in this direction as we will be successful in reaching families which are living in the remotest region and mountainous areas," the Union minister said.

He said some days back, a trial of the BVLOS UAV was conducted in Bhaderwah valley of the hilly Doda district of Jammu and Kashmir, and "vaccines were dropped successfully within half an hour which otherwise would have taken three hours."

The UAV is made out of light weight carbon fiber and is a foldable structure that allows ease of transportation. It has unique features like autonomous guidance with advanced flight instrumentation systems, the official said.

The UAV can fly at an operational altitude of 500 metres above ground level and at a maximum speed of 36 kmph, he said.

Its regulatory compliance includes DGCA-NPNT, geo fencing and digital sky with 360 degree collison avoidance making it one of the best UAV in its class, the officials said.