Own clothes, jail food for Nirav

Jeweller in prison where Assange was held 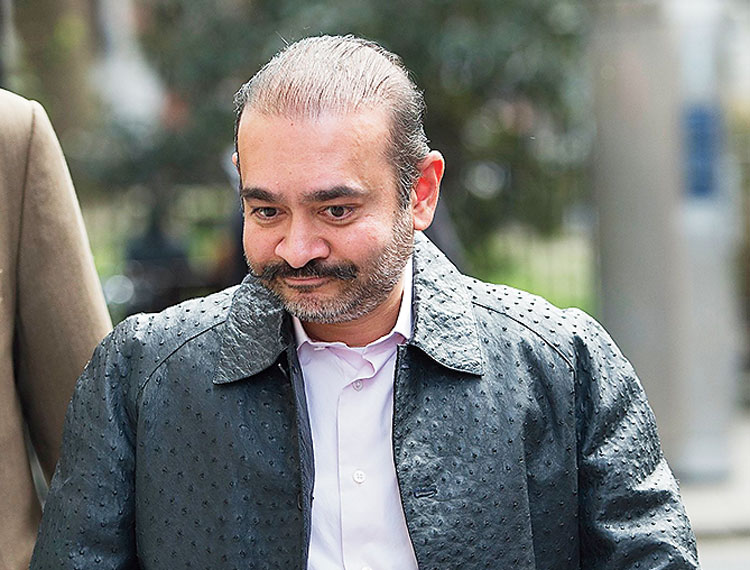 Nirav Modi will be desperately hoping he gets bail when he reappears at the Westminster Magistrates’ Court on March 29 because the last five days he has spent in Wandsworth prison in southwest London will have been some of the most disagreeable in his life.

“I wouldn’t like to be there — it is one of the most overcrowded prisons in the country,” said Navnit Dholakia, the Liberal Democratic deputy leader in the Lords, who has long taken an interest in prison reform.

“The first 24 hours will have been a shock, which is when governors keep a close watch on prisoners to make sure nothing goes wrong,” added Dholakia, who has visited many prisons, including Wandsworth.

Nirav will be allowed to wear his own clothes rather than the prison uniform and have access to his lawyers. The 48-year-old diamond jeweller, who is a Jain, can also make a request for vegetarian or vegan food but this is cooked in the prison kitchen and cannot be brought in from one of London’s Michelin-starred Indian restaurants. He will be thrown in with other convicted prisoners, even though he is on remand.

Nirav, whose extradition is being sought by Indian authorities for allegedly defrauding Punjab National Bank out of Rs 13,000 crore, was remanded in custody on March 20 because district judge Marie Mallon said she feared he “may have means of escape”.

Dholakia, who arrived in Britain from Tanzania in 1957, became a member of the Howard League for Prison Reform and also joined the board of visitors for a number of prisons.

Dholakia explained: “The number of prisoners has been going up and up and the facilities less and less since I came to this country.”

The peer, who said he believed in reducing crime “rather than just locking people up”, estimated that Indians made up “less than 2 per cent of the prison population” while for Pakistanis the figure was “10 per cent”.

The Indian-origin population in the UK is around 2.5m, while for Pakistanis, it is 1m.

He said it was unlikely that Nirav would get a single cell, although when he was brought in by van, an attempt would have been made “to keep him away from violent prisoners”.

Toilet facilities will also not suit Nirav, who is probably more familiar with luxury hotels. If there is a lavatory inside the cell — not all have them — he will find there is no privacy overnight. And if there isn’t, he will have to use a “potty” and engage in the not very dignified process in the morning of “slopping out”, Dholakia said.

Her Majesty’s Prison (HMP) Wandsworth, built in 1851 as the Surrey House of Correction, now has a museum, located inside a garage, which Nirav may one day want to come back and visit. It has reminders of the past, including nooses used in 135 executions carried out between 1878 and 1961.

Rather like the honours board at Lord’s cricket ground, Nirav now joins a star list of people who have been held at Wandsworth, where “38 per cent of the population were foreign nationals”.

They included match-fixing maestros Mazhar Majeed, Mohammad Asif and Salman Butt; the author Oscar Wilde; the late PR supremo Max Clifford, whose clients include the Bollywood actress Shilpa Shetty; Julian Assange, of WikiLeaks fame now holed up in the Ecuadorian embassy in London; and Ronnie Biggs, the “great train robber” who escaped from Wandsworth and fled to Brazil.

Now that he has a bit of spare time, Nirav can also ask for a copy of the “report on an unannounced inspection of HMP Wandsworth by HM Chief Inspector of Prisons”, Peter Clarke, between February 26 and March 9, 2018.

It won’t make for pleasant reading.

The report, which followed up a similar inspection in 2015, began: “HMP Wandsworth is a category B local prison in south London…. It holds 1,428 men, and is one of the most overcrowded prisons in England and Wales. However, that does not tell the full story of the challenges faced by the prison.

“At the time of this inspection, 36 per cent of the prisoners were receiving psychosocial help for substance misuse problems, 40 per cent told us it was easy to get illicit drugs, and 450 referrals were made to the mental health team each month.

“In essence, there were too many prisoners, many with drug-related or mental health issues, and with not enough to do. This is of course an all too familiar story, but it must not be forgotten that more than 100 prisoners every month were being released into the community. How much better could their prospects, and those of the communities into which they were released, have been if their time in prison had been spent in more decent conditions?”

The inspectors backed up what Dholakia had said: “The living conditions at Wandsworth were what we see all too frequently in older, overcrowded prisons. Cells designed for one prisoner were occupied by two, with poorly screened lavatories and the prisoners confined in them for far too long each day.”

Nirav, who is small in stature, will hope to avoid the threat of assault, physical or sexual.

“In our survey, 48 per cent of prisoners said they had experienced some form of victimisation from other prisoners, higher than similar prisons and the last inspection.

The report emphasised: “Wandsworth remained the most overcrowded prison in the country, with most prisoners sharing a cell designed for one person. Broken windows and door observation panes were common, and conditions in many cells were poor, with much damaged flooring. Several cells had been without a toilet seat for months.

“In our survey, fewer than a third of prisoners said that they received cell cleaning materials weekly, and the standard of cleanliness was poor. This reflected attitudes of staff and prisoners alike in accepting low standards of tidiness and care for the conditions in which they worked and lived.

“Showers remained the least satisfactory part of the residential areas. Only half the prisoners said in our survey that they could shower every day, although this was an improvement on the previous inspection. Several shower rooms were out of use, and the water flow and temperature was unreliable in others… Many prisoners told us that the hot water and heating systems were not fit for purpose. Missing tiles, broken flooring and ingrained dirt marred almost all the shower rooms in use.”

There are no dosas for breakfast nor hot masala chai.

Getting drugs into prison remains a preoccupation for many prisoners.

Another report, released on Sunday, said that at one establishment, “criminals stuffed dead rats with drugs and mobile phones in an attempt to smuggle the contraband into a prison”.