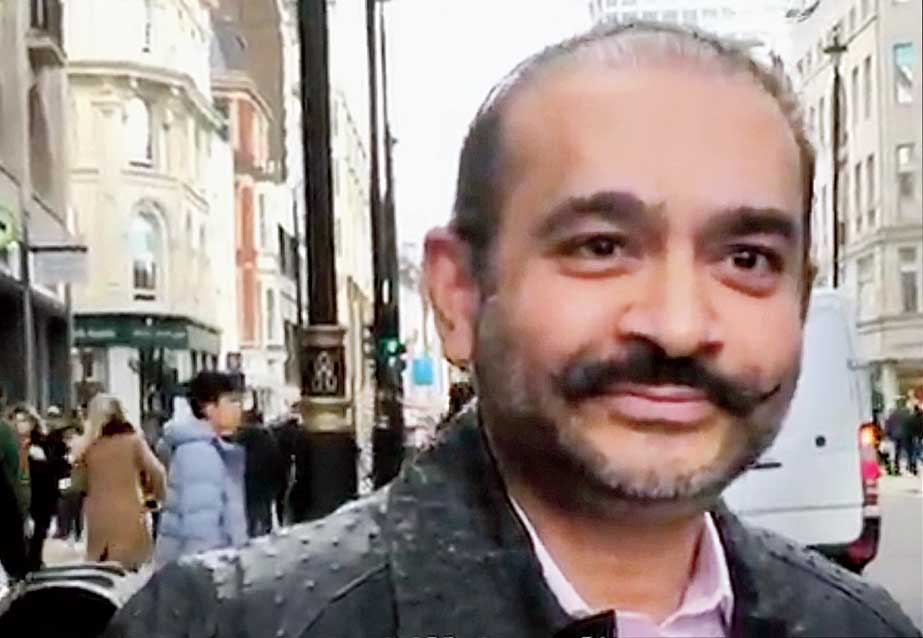 Light has been shed on how Nirav Modi looks and lives since he posed for a group photograph with Prime Minister Narendra Modi last year and soon after became one of the most infamous Indian fugitives.

Stung by a disclosure by a London-based newspaper and the resultant political backlash in India, the BJP tweeted on Saturday: “Many of these who cheated India… are living the life of fugitives and refugees.”

The following is an account of the “refugee life” being led by Nirav, the diamantaire accused of defrauding Punjab National Bank out of Rs 13,000 crore, as described by The Daily Telegraph, London.

“This means he can work legally in the UK and can claim benefits,” a department spokesperson told The Telegraph.

The last time India had seen a clear picture of Nirav was early in 2018. That picture was taken on January 23, 2018, at Davos and shows Nirav as well as Prime Minister Modi. Footage uploaded by The Daily Telegraph shows a plumper and visibly aged Nirav.

All the questions The Daily Telegraph put to Nirav were met with a polite “no comment”. He would not say whether he has applied for political asylum.

On Saturday, India’s foreign ministry said the government was aware of Nirav’s presence in Britain, which is why it had sent an extradition request last August, to which the British authorities had sent no official response so far.

“Just because he has been spotted in the UK does not mean that he can be immediately brought to India,’’ ministry spokesperson Raveesh Kumar said.

According to the British newspaper, Nirav is living in a three-bedroom flat in Centre Point, a high-rise building next to the Tottenham Court Road underground station.

Nirav is not listed as a director.

The newspaper says “the ability of Modi to continue living a privileged lifestyle in London will raise serious questions potentially threatening a rift between the UK and India. It is not clear why the British government has given him a National Insurance number and yet has apparently failed to act on the Interpol red notice. A red notice is a request to locate and provisionally arrest an individual pending extradition.

“It is not an international arrest warrant and Interpol cannot compel any member country to arrest an individual who is the subject of a red notice.”

Speaking to The Telegraph, the spokesperson for the department of work and pensions said: “We don’t comment on individual cases.”

A senior Indian businessman told The Telegraph: “What the Indian government has to show to the courts is that the crime for which anyone is sought back in India is also a crime in the UK. It doesn’t take much to get a National Insurance number. A lot of people come from India and manage to get one.”