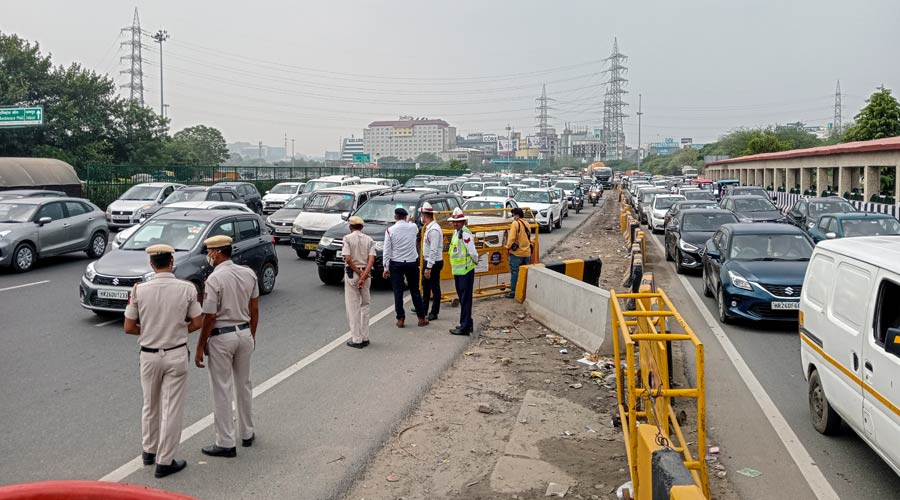 More than 500 trains were cancelled on Monday with operations being disrupted again by protests across states against the Agnipath defence recruitment scheme.

Delhi, Punjab, Howrah in Bengal, Patna in Bihar, Andra Pradesh were among the cities and states where security was tightened in view of a Bharat bandh called by youths against the Agnipath scheme under which three-fourths of the recruits are to be demobbed without pension after four years of service, reports ndtv.com

In Delhi, the police on Monday tightened security across the city and its bordering areas and warned of strict action against those trying to disrupt the law and order situation.

Also, keeping in mind the Congress' protest against the Enforcement Directorate questioning senior party leader Rahul Gandhi, adequate security arrangements have been put in place and strict vigil is being kept as per the intelligence input, police said.

There was heavy deployment at railways stations across the national capital and the Government Railway Police Force (GRPF) was also coordinating with its units in the neighbouring states, police said.Deputy Commissioner of Police, Special Branch and PRO, Suman Nalwa warned of strict action against any person trying to disturb the law and order situation in Delhi. "We are in full preparedness so that no untoward incident happens. Delhi is open. The traffic movement is smooth. All establishments and offices are open. There is no bandh in Delhi. Borders are not closed. But we are keeping a strict vigil as per the intelligence inputs received and taking all precautions," she told PTI.

Deputy Commissioner of Police (Railways) Harendra Kumar Singh said, "We have deployed all our strength on railway platforms and are monitoring the situation in close coordination with the GRPF. Personnel from other states too are on duty here. So far, we have not received any information on suspicious movement on railway stations and tracks."

Extra pickets have also been deployed on the bordering areas of Delhi to ensure all the vehicles and documents are checked before they are allowed entry to the capital, police said. Special Commissioner of Police (Law and Order) Dependra Pathak said that adequate security arrangements are put in place to prevent incidents of arson. "We are fully prepared and our staff members have been deployed in adequate numbers to ensure the situation in Delhi remains peaceful," he said.

Long queues of slow-moving vehicles were seen in these areas. Many commuters took to Twitter to share their plight. While one commuter said he had been stuck in traffic for almost 30 minutes and was running late for office, another asked people to avoid the Anand Vihar-Sarai Kale Khan stretch.

The Delhi Traffic Police, however, said their teams have been deployed at various spots to ensure smooth flow of traffic. After the policy was announced on June 14, protests erupted in various states including Delhi, Uttar Pradesh, Bihar, Haryana, Telangana, Odisha, West Bengal, Madhya Pradesh, Punjab, Jharkhand and Assam.

As the agitation intensified in some places, protestors went on the rampage setting trains on fire, torching vehicles and damaging both private and public properties.

The Congress is also scheduled to hold "peaceful" protests across the country on Monday against the "anti-youth" Agnipath recruitment scheme and Rahul Gandhi's questioning by the Enforcement Directorate (ED) in the National Herald money laundering case.

Security was tightened at various locations in the Howrah district in  Bengal, reports ndtv.com. "Police forces have been deployed at multiple locations. We are ready to tackle any kind of situation that may arise. We also urge the youth to not get involved in any untoward activity," Anupam Singh, DCP North, Howrah told reporters.

Security forces were deployed at Vijayawada Junction railway station on Monday. Barbed wires were also put up. Additional police forces have been deployed in all prime locations of the city.

The Punjab government on Monday ramped up security across the state too. Security has been tightened near central government offices, army recruitment centres,  military installations, BJP and Hindu leaders' offices in Punjab."The offices and installations related to Central Government departments shall be strongly protected," an official statement said.

A day after violence erupted at the Ludhiana railway station, Ludhiana Police have mounted a night-long vigil since Sunday. Ludhiana Commissioner of Police (CP) Kaustubh Sharma said, "In view of the tensions prevailing in the state right after the announcement of the Agnipath scheme, we have made special arrangements at the station for Monday morning."

"We have done special deployment of Rapid Action Force. Many people have been arrested. We are taking action against those involved in the incident that took place on June 19," the police official said.