Over 42 lakh deaths in India prevented by Covid vaccines in 2021: Lancet study

WHO had last month estimated that there were 4.7 million Covid-linked deaths in India, a figure that was refuted by government 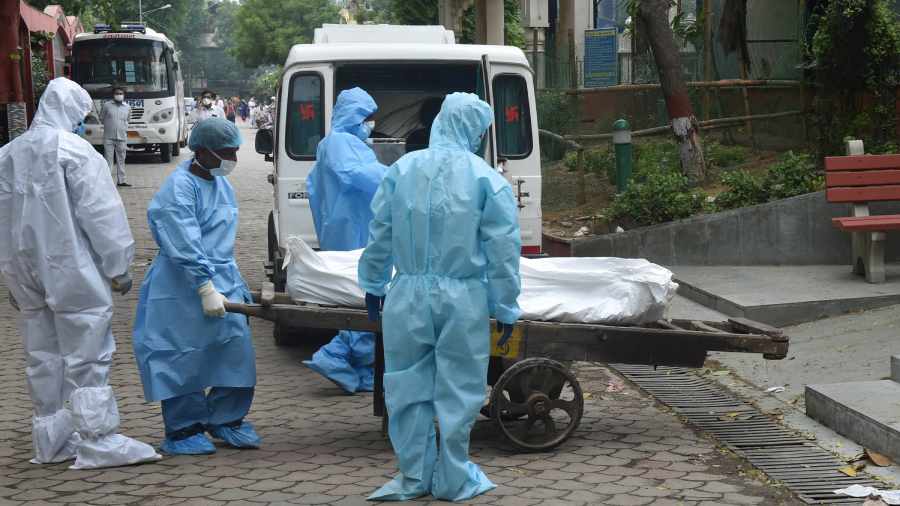 Covid-19 vaccines prevented over 42 lakh potential deaths in India in 2021, according to a modelling study published in The Lancet Infectious Diseases journal, which based its findings on estimates of "excess" mortalities in the country during the pandemic.

Globally, the study based on excess deaths from 185 countries and territories found that in the first year of the vaccination programme, 1.98 crore out of a potential 3.14 crore Covid-19 deaths were prevented worldwide.

The study estimates a further 5.99 lakh lives could have been saved if the World Health Organisation's target of vaccinating 40 per cent of the population in each country with two or more doses by the end of 2021 had been met.

The researchers estimated the number of deaths that were prevented between December 8, 2020 and December 8, 2021, which reflects the first year in which the vaccines were distributed.

"What this modelling study shows is that the vaccination campaign in India has likely saved millions of lives. This shows the remarkable impact that the vaccination has had, especially in India, which was the first country to experience the impact of the Delta variant," Watson said in an email.

He said the India numbers are based on the estimates that between 48.2 lakh and 56.3 lakh deaths may have occurred in the country during the pandemic, a number which is 10 times the official figure of over 5.24 lakh deaths reported so far.

"These are based on the estimates of excess mortality in India during the Covid-19 pandemic, which we have sourced from The Economist and are similar to the estimates that the WHO have reported.

"Independently, our group has also investigated the Covid-19 death toll based on reports of excess mortality and seroprevalence surveys and arrived at similar estimates of almost 10 times the official count," Watson said.

According to the estimates by The Economist, 23 lakh people died in India from Covid-19 by the start of May 2021, as against official figures of around 2 lakh by then.

The WHO had last month estimated that there were 47 lakh Covid-linked deaths in India, a figure that was refuted by the government.

Of the almost 2 crore deaths estimated to have been prevented in the first year after vaccines were introduced, almost 75 lakh deaths were prevented in countries covered by the Covid-19 Vaccine Access initiative (COVAX), the researchers said.

The initiative has facilitated access to affordable vaccines for lower income countries to try to reduce inequalities, with an initial target of giving two doses to 20 per cent of the population in countries covered by the commitment by the end of 2021.

"The saving of more than 19 million (1.9 crore) lives by the unprecedented rapidity of development and roll-out of COVID-19 vaccines is an extraordinary global health feat," Professor Alison Galvani, from Yale University School of Public Health, US, said.

"Nonetheless, millions of additional lives could be saved by more equitable distribution of vaccines," Galvani, who was not involved in the study, said in a statement.

Since the first Covid-19 vaccine was administered outside of a clinical trial setting on December 8, 2020, almost two-thirds of the world's population has received at least one dose of a COVID-19 vaccine (66 per cent), they noted.

Despite the incredible speed of the vaccine roll-out worldwide, more than 35 lakh Covid-19 deaths have been reported, researchers said.

To account for under-reporting of deaths in countries with weaker surveillance systems, they carried out a separate analysis based on the number of excess deaths recorded above those that would have been expected during the same time period.

China was not included in the analysis owing to its large population and very strict lockdown measures which would have skewed the findings, the researchers said.

The team found that based on officially recorded Covid-19 deaths, an estimated 1.81 crore deaths would have occurred during the study period if vaccinations had not been implemented.

Of these, the model estimates that vaccination has prevented 1.44 crore deaths, representing a global reduction of 79 per cent.

These findings do not account for under-reporting of Covid-19 deaths, which is common in lower income countries.

A further analysis based on total excess deaths during the same time period found that Covid-19 vaccination prevented an estimated 1.98 crore deaths out of a total of 3.14 crore potential deaths that would have occurred without vaccination, a reduction of 63 per cent.

More than 79 per cent of deaths averted were due to the direct protection against severe symptoms provided by the vaccination, leading to lower mortality rates, the researchers said.

The remaining 43 lakh averted deaths were estimated to have been prevented by indirect protection from reduced transmission of the virus in the population and reduced burden on healthcare systems, they said.