Visuals from the congregation show teeming crowds milling about on the Ganga’s banks, with no signs of masks or physical distancing 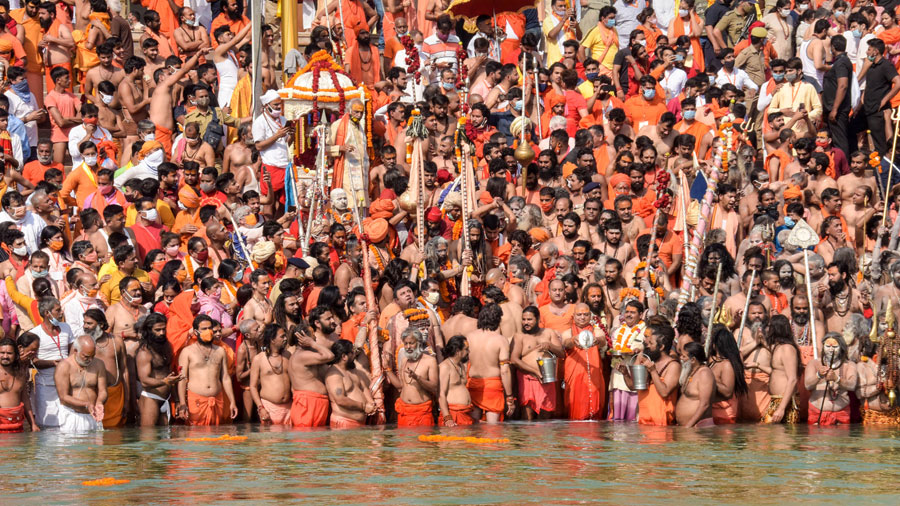 Uttarakhand chief minister Tirath Singh Rawat, however, made light of the situation on Thursday, saying his administration was following every protocol and boasting how efficient management had ensured a “peaceful” Ganga bath by 13.5 lakh people on Mesh Sankranti, Wednesday.
PTI
Lucknow   |   Published 16.04.21, 01:57 AM

Over 1,300 devotees, sadhus and officials have tested Covid-positive since Tuesday at the Mahakumbh in Haridwar, marking a surge amid a second wave of the pandemic countrywide.

Uttarakhand chief minister Tirath Singh Rawat, however, made light of the situation on Thursday, saying his administration was following every protocol and boasting how efficient management had ensured a “peaceful” Ganga bath by 13.5 lakh people on Mesh Sankranti, Wednesday.

State chief secretary Om Prakash dismissed speculation about an early closure to the Kumbh, scheduled to run till April 30, saying: “We have no such plan.”

While the Centre had said that every visitor to the Kumbh would have to carry a Covid-negative certificate, pilgrims say the rule has not been implemented strictly — an allegation that Uttarakhand officials privately corroborate.

Visuals from the congregation show teeming crowds milling about on the Ganga’s banks, with no signs of masks or physical distancing.

Some 30 lakh pilgrims and sadhus have visited the Kumbh, gathering since mid-March although the event officially started on April 1, and over 20 lakh are currently there.

According to the state health department, some 1,854 people at the Kumbh had tested Covid-positive over the past fortnight, including 1,300 since Tuesday.

“We are increasing the tests in the Mahakumbh area and making adequate arrangements to prevent the spread of the virus,” Haridwar chief medical officer S.K. Jha said.

The chief secretary said three of the four Shahi Snans (auspicious days for sadhus to bathe in the Ganga) had been organised successfully and the last one would be held on April 27.

Rawat dismissed the social media comparisons of the government’s attitude towards the Kumbh and the Tablighi Jamaat gathering of less than 3,000 people in Delhi’s Nizamuddin from March 13 to 15 last year.

Hundreds of Indian and foreign Tablighis had been arrested across the country — and later acquitted by the courts — although the gathering had police permission and had taken place before the nationwide lockdown.

Union and state ministers from the BJP had demonised the Tablighis, blaming them for the epidemic’s spread in the country, while Right-wing trolls accused them — and Muslims in general — of deliberately infecting people.

In contrast, the Centre and the Uttarakhand government have turned a blind eye to the danger the Kumbh poses amid a coronavirus resurgence in the country.

Rawat’s logic was that the Kumbh was being held in an open area while the Tablighi congregation was organised within a building.

“It’s wrong to compare the two religious congregations. People were living in the same building (at the Tablighi event), sharing beds and other things, whereas the Mahakumbh has been organised in a huge area where people live in different tents,” he said.

The bigger tents, however, accommodate several dozens of people each.

Of those infected, more than 200 are monks, including many Naga sadhus. Narendra Giri, head of the Akhil Bharatiya Akhara Parishad, an umbrella organisation of sadhus, tested positive three days ago.

The test report of Kapil Dev, mahamandaleswar of the Ani Nirvani Akhara, came positive on Thursday, three days after he had died at Kailash Hospital in Dehradun, hospital director Pawan Sharma confirmed.

Hunger worse than Covid for migrants