Reddy was undergoing treatment for pneumonia at a hospital in Hyderabad 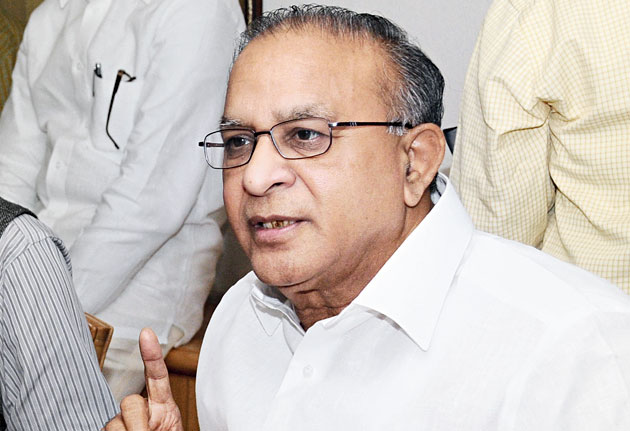 The passing of Jaipal Reddy has come at a time the Opposition appears rudderless and bereft of a unifying force.
Telegraph file picture
Our Special Correspondent   |   New Delhi   |   Published 28.07.19, 08:25 PM

S. Jaipal Reddy, who was instrumental in forging Opposition unity when a seemingly unassailable Congress began to lurch from one blunder to another in the late-1980s, died on Sunday in Hyderabad. He was 77.

Reddy was undergoing treatment for pneumonia at a hospital in Hyderabad.

The passing of Reddy has come at a time the Opposition appears rudderless and bereft of a unifying force.

Reddy, who had been struck by polio when he was 18 months old and used crutches to walk, was remembered as a leader who did not hesitate to walk out in protest to uphold “democratic values” and “institutional autonomy”.

Reddy had joined the Congress in the 1970s as a student leader but left the party in 1977 to protest against the imposition of Emergency by Indira Gandhi.

He embraced the Janata Party but returned to the Congress in 1999 after getting “disillusioned” by the Janata experiment.

Janata Dal United secretary-general K.C. Tyagi, who worked with Reddy during his Janata days, recalled the leader as one who stood-up for “democratic values” and “institutional autonomy”.

“Jaipal Reddy led a move for unity of different Opposition parties and the formation of one party headed by V.P. Singh,” Tyagi said.

Tyagi added that Chandrashekhar, the then Janata Party stalwart and future Prime Minister, was against V.P. Singh being projected as the Prime Minister candidate of the Opposition. But Reddy worked actively with other senior leaders and V.P. Singh did become Prime Minister. Reddy was the Janata parivar’s chief spokesperson who articulated the political line.

“Post-Mandal (the phase when the Mandal commission report was implemented by the V.P. Singh government to give reservation to OBCs), the Janata Dal disintegrated. Lalu Yadav, Mulayam Singh Yadav and others split and formed their own parties,” Tyagi recalled. “It was at this point that Jaipalji got disillusioned with the Janata experiment and walked-out to re-join the Congress,” he added.

“He (Reddy) was an articulate leader and a man of principles who always looked for a good alternative. When he didn’t get that alternative, he walked out,” Tyagi said.

“Deeply saddened by the untimely passing away of my friend and veteran Congress leader Shri Jaipal Reddy. He was a treasure of wisdom and knowledge. My condolences to the bereaved family,” former Prime Minister Manmohan Singh said. Reddy had worked as information and broadcasting minister under Singh.

In UPA-2, Reddy was assigned the urban development ministry. Later, he became the minister of petroleum and natural gas, but was shifted to the science and technology and earth sciences ministries. It was widely speculated that Jaipal Reddy was shunted out of the petroleum ministry because notices were issued to certain oil and gas companies on production issues.

“Shri Jaipal Reddy had years of experience in public life. He was respected as an articulate speaker and effective administrator. Saddened by his demise…,” Prime Minister Narendra Modi tweeted.

Rahul Gandhi described Reddy as “an outstanding parliamentarian” and a “great son of Telangana” who “dedicated his entire life towards public service”.

“Behind every word that he spoke or wrote, there was deep scholarship and a passion that was remarkable. He effortlessly combined old world values and the new world’s technologies,” former Union minister P. Chidambaram said.