While one of the patients carrying the virus returned from Nigeria, the other came back from Qatar 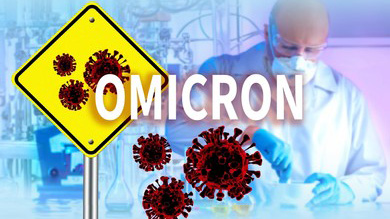 Odisha has reported its first two cases of the omicron variant of Covid-19. While one of the patients carrying the virus had returned from Nigeria, the other came back to the state from Qatar.

The health condition of both the patients is stated to be stable. They hail from the state’s coastal belt — one from Jagatsinghpur and the other from Khurda district.
Following the detection of these two cases, top health officials held a meeting on Tuesday to discuss ways of dealing with the situation.

Public health director Nirnanjan Mishra said: “The two patients have already been admitted to hospital and their condition is stable. There is nothing to panic about. All the 21 people who have come in contact with these two patients have been traced.”

So far 8,800 people have returned to the state from other countries and 1,600 of them came from the countries at risk.

“Those who have come from high risk countries have undergone the RT-PCR test. Twelve of them have tested positive and their samples were sent for genome sequencing.

Out of them two patients were found infected with the omicron variant.” Mishra told reporters on
Tuesday.

Mishra said the people coming to the state from non-risk countries are also being kept under surveillance.

The Odisha government has also released Rs 350 crore for disbursement as livelihood assistance among the poor people during the prevailing pandemic situation, official sources said.

All the families covered under the National Food Security Act (NFSA) and State Food Security Scheme (SFSS) will be given Rs 1,000 each as livelihood assistance in all 30 districts. In a letter, food supplies and consumer welfare department additional secretary M.Q. Haque on Monday requested Odisha State
Civil Supplies Corporation Limited managing director to release the funds immediately.

“It is requested to release the funds to 30 districts immediately by crediting the amount online to the bank accounts of CCSO/CSO-cum-district managers as per beneficiaries,” Haque mentioned in the letter, adding that the distribution has to be completed in seven days from the date of start.

For identification of the beneficiaries, the letter said that the Biju Swasthya Kalyan Yojana (BSKY) card will be used as the primary ID proof. However, in case of non availability of BSKY cards, existing NFSA and SFSS cards shall be considered as ID proof.
With inputs from PTI