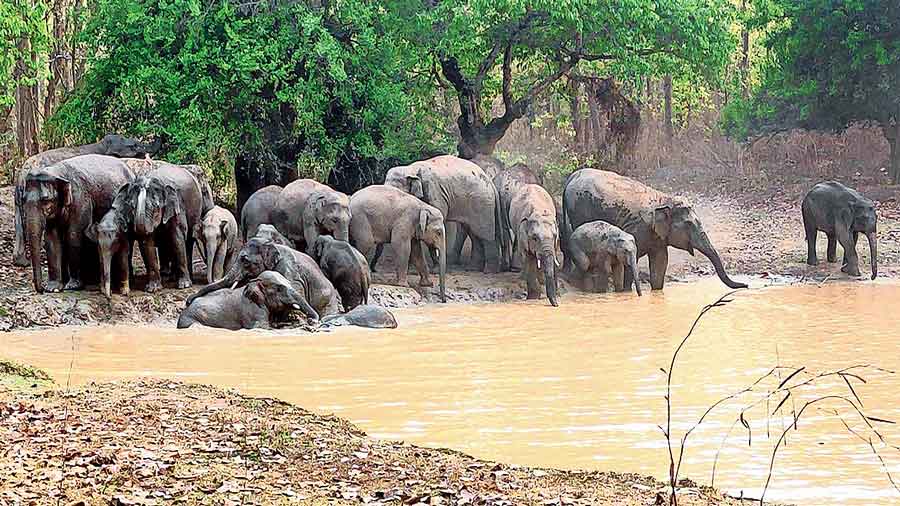 The Odisha government has used soil balls stuffed with bamboo seeds to create enough foodstuff for elephants so that they will no longer raid human habitation in search of food and fall victim to poachers.

In the past three years, 3.7 lakh bamboo seeds have been planted using these soil balls to create bamboo forests, officials said.When the elephants are moving out of the dense forest in search of food, either they fall victim to poachers or get killed after coming in contact with the high power transmission lines, officials said.

Now a tusker is battling with life after being shot at Narasinghpur in Cuttack district.Out of 935 pachyderms killed during the period (2011-12 to 2021-22) 141 elephants died in accidents and 135 died due to electrocution. Similarly, 307 elephants died of diseases. Poachers killed as many as 48 elephants while 119 died of natural causes.

The reasons for the death of another 131 elephants are yet to be ascertained. Most of the electrocution has been taking place in forested areas, near roadsides and on railway tracks. In a related development, the Odisha High court took cognizance of the rising elephant deaths in the state and asked the state chief wildlife warden to appear before it on August 8 and file his response on the issue.

Minister forest, environment and climate change Pradeep Amat said: “A number of steps are being taken to check the elephant death. We are using soil balls stuffed with bamboo seeds to create bamboo forest so that the pachyderms can have their favourite foods when seeds grow into plants and not raid nearby villages. We are also putting emphasis on transmission of power through insulated cable lines.”

He said: “The state government has so far used seed balls extensively and planted 3.7 lakh seeds using the soil balls. Besides, 85 acres of fruit bearing trees have been planted near the forest to give a checkmate to the elephant raids to the human habitation in search of food.”An elephant requires up to 150kg of food a day.

“Elephants often enter human habitations for want of adequate food in their natural habitats. If we can solve the problem by creating a solid food base for them, they will stop raiding human settlements,” officials maintained. The soil balls embedded with bamboo seeds are thrown into vacant plots inside the forest. Each orb, of the shape and size of a cricket ball, is made of 50 to 100 grams of good muddy soil and stuffed with 10 to 15 bamboo seeds.

“The forest officials also mix pesticides so that the seeds are not destroyed by insects. The balls are dried for up to 24 to 48 hours before being thrown into the barren forest patches,” the officials added.

Besides falling to the poachers when they come out from the dense forest, the elephants also die after coming in contact with the high voltage electric line.

“We have identified 13,606 places as vulnerable places where the elephants are susceptible to come in contact with the transmission line. Work has been started to strengthen these areas. We need to strengthen the other 10,000 places so that there would be least chances of an elephant to come into contact with the electricity. The government plans to put insulated cable for the transmission of the electricity. Another 1,300km of insulated cabling will be done in the coming days,” said the official.“We are also using GPS fitted vehicles that watch and monitor the movement of the elephants. Attempts are being made to take out all the illegal hooking. Besides, 1,284 solar street lights have been put up in villages prone to elephant attacks,” said officials.