The GC meet, that witnessed chaotic scenes was over within 40 minutes after it started 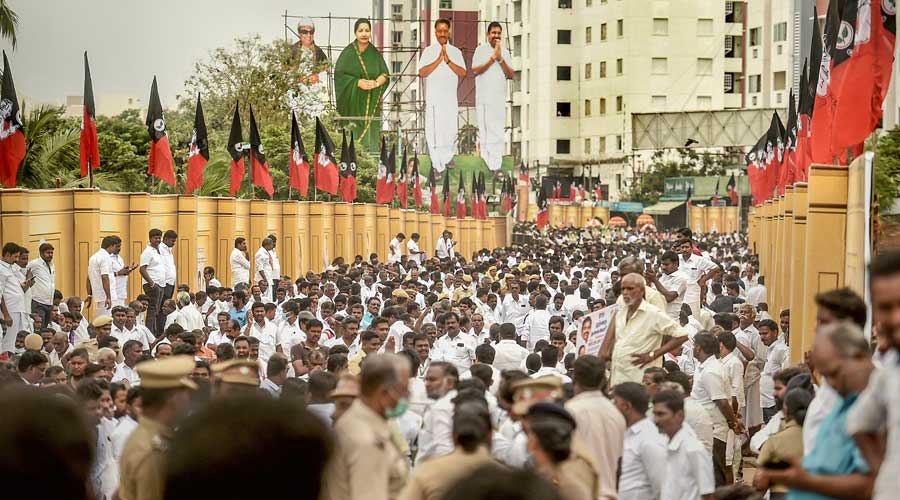 Amid chaos, the AIADMK General Council meeting here on Thursday announced that the one and only demand of the GC members is to bring in a system of a single leadership for the party, favouring Joint Coordinator Edappadi K Palaniswami (EPS).

The Executive and General Council meet held together saw EPS emerging as the supreme leader and he was honoured with a decorated crown, a sword and sceptre by supporters. EPS's colleague and Coordinator O Panneerselvam, popularly known as OPS was apparently snubbed in the meet and rude slogans were shouted against him. The meet, which stuck to the one and only demand of making EPS the supreme party leader, turned out to be a full show of strength of the Palaniswami camp with OPS followers heavily outnumbered.

Panneerselvam camp promptly declared the proceedings invalid and OPS, a three-time Chief Minister is likely to air-dash to Delhi to explore options like approaching the Election Commission to take forward his fight against EPS faction. While the EPS camp asserted that the GC would meet again on July 11 to elect Palaniswami as the party head, OPS group said that it is not possible as only Coordinator and Joint Coordinator had the powers to convene the meet and not the Presidium Chairman. The meet was as well a pointer to the region and caste based groupings within the AIADMK. Within the party, most belonging to the Vanniyakula Kshathriyas community also known as Vanniyars, dominant in northern Tamil Nadu and the Gounders, seen as movers and shakers of the western region favoured EPS. Panneerselvam's loyalists mostly belong to the southern parts of the state and to the Mukkulathor community, a Most Backward Caste like Vanniyars. OPS hails from the Mukkulathor community.

OPS speaking in favour of considering taking back into the party, V K Sasikala, confidante of late party supremo J Jayalalithaa and appearing to be 'soft' towards the DMK were among the EPS camp's grouses against him.

Elsewhere, addressing a function, DMK President and Chief Minister M K Stalin made a veiled reference to the infighting in the AIADMK and said those who wanted to decimate his party have now been wiped out.

When the EC-GC meet, that rejected all the 23 proposed resolutions, consistently focused on the 'EPS for single leader' demand, OPS was prompted to leave the dais along with his supporters including R Vaithilingam. The meet, that witnessed chaotic scenes was over in less than 40 minutes after it started.

A water bottle landed pretty close to OPS when he stood near the podium and fell on his Personal Security Officer who extended his arms around the former Chief Minister to protect him. A second water bottle came close to the party Coordinator when he was walking down the stairs from the dais towards the exit gate. A palpable sense of anxiety prevailed as supporters of Paneerselvam and Palaniswami engaged in rival slogan shouting and some of them loudly argued against one another and voiced their full-throated backing to their respective leaders. As OPS and EPS entered the premises of the hall -the venue of the meeting- their supporters raised slogans welcoming them.

At the AIADMK meeting, when the GC members cheered and overwhelmingly favoured EPS and stuck to the single leadership demand, OPS stood up from his seat on the dais on a cue from Vaithilingam and started moving towards the podium.

Taking the mic, Vaithilingam, party Deputy Secretary announced that the GC meet went against the law and was not valid and when he had moved just a few steps ahead, another Panneerselvam loyalist P H Manoj Pandian raised slogans favouring his leader. All along OPS was standing close to the podium and during this time, a water bottle landed behind his back from the audience. JCD Prabhakar was among other OPS supporters who were on the dais to support their leader.

As soon as the meet commenced amid chaotic scenes of slogan shouting, the process of taking up the agenda for the meeting and passage of already decided resolutions were taken up. The first among them, to invite Interim Presidum Chairman, Tamilmagan Hussain to chair the GC meet was proposed by Panneerselvam and seconded by Palaniswami, who addressed the former as 'brother' in his brief remarks. Later, the General Council formally recognised Hussain as the Presidium Chairman.

Soon, senior leader C Ve Shanmugam who was recently elected to the Rajya Sabha announced that all resolutions "are rejected by the General Council." Shanmugam said the party needed a single leadership as the current dual leadership led by OPS and EPS has led to contradictions, setbacks, embarrassments, administrative issues and could not effectively take on the ruling DMK. This has demoralised cadres, he said and added that as many as 2,190 GC members have signed a petition favouring a sole leader, apparently a pointer to EPS. Shanmugam, a party heavyweight from northern Tamil Nadu said the party stood for abolition of two top leadership posts. Deputy Secretary K P Munusamy said all the GC members have rejected all the 23 proposed resolutions. "Their one and only demand is for a single leadership." When such a resolution favouring a single leadership is taken up and passed, all other resolutions would be adopted on the same day, he added. B Valarmathi, a senior office-bearer and a former Minister sung a song from party founder, the late M G Ramachandran's movie and said, 'a leader will emerge' apparently hailing EPS. Panneerselvam was seated close to EPS on the dais when the GC burst into the single leadership chorus. Soon, Hussain announced that the next GC meet would be held on July 11 and Munusamy told reporters that EPS is all set to elected as the party's supreme, single leader, (General Secretary) in the next month's meeting.

Later speaking to reporters, Vaithilingam declared Hussain's election as Presidium Chairman as null and void. Only Coordinator and Joint Coordinator have the powers to recognise the election, he said. The Cauvery Delta region based AIADMK leader and OPS loyalist blamed the EPS camp for its 'hunger for power' and 'greed.' He said the meet was nothing but a show of autocracy and violated the Madras High Court's directives in connection with the GC meeting.