This is something that all of us in India already know, now we have a chance to share that ancient wisdom with the rest of the world, says the sand artist 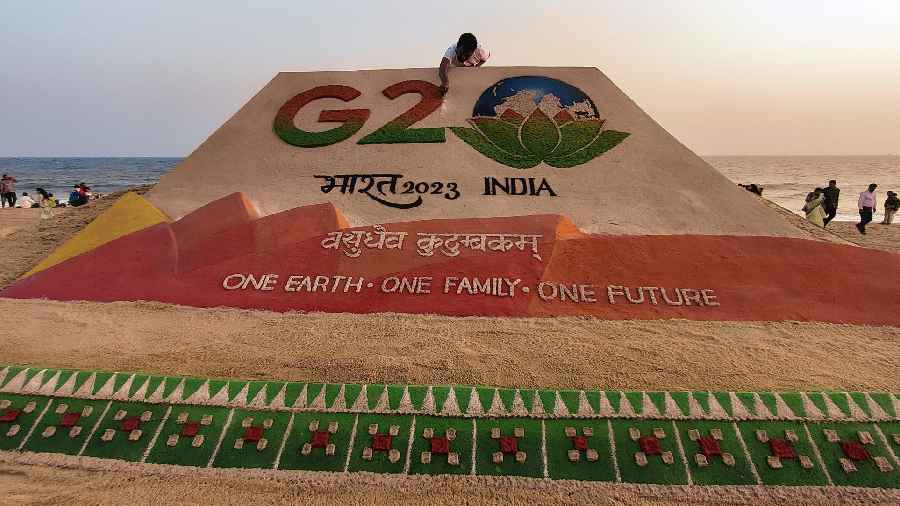 Noted artist Sudarsan Pattnaik created the logo of India's G20 presidency on sand on Thursday as the country officially took over the chair of the grouping.

Pattnaik displayed the logo and its theme at the International Sand Art Festival in Konark in Odisha.

Pattnaik along with his students spent over two days in making the G20 Logo in sand, officials said.

India assumed the year long presidency of the G20 forum on December 1 and will hold over 200 meetings across 50 plus cities in India with foreign delegations participating in these events in different parts of India.

Prime Minister Narendra Modi said that India's G20 Presidency will work to promote a universal sense of one-ness rooted in the Indian philosophy of Vasudhaiva Kutumbakam or One World, One Family, One Future.

Speaking to reporters, Pattnaik said India's logo and theme represent the ancient knowledge and values that have passed down through millennia with the message of Vasudhaiva Kutumbakam (world is one family).

"This is something that all of us in India already know, now we have a chance to share that ancient wisdom with the rest of the world through the G20 platform," he said.

Organised by the Government of Odisha every year from December 1-5, the International Sand Art Festival in Konark has grown every year with several foreign artists too participating in 2022.

Over five lakh visitors are expected to visit the Sand Art Festival in the temple city of Konark on Chandrabhaga beach over the five days, officials said.