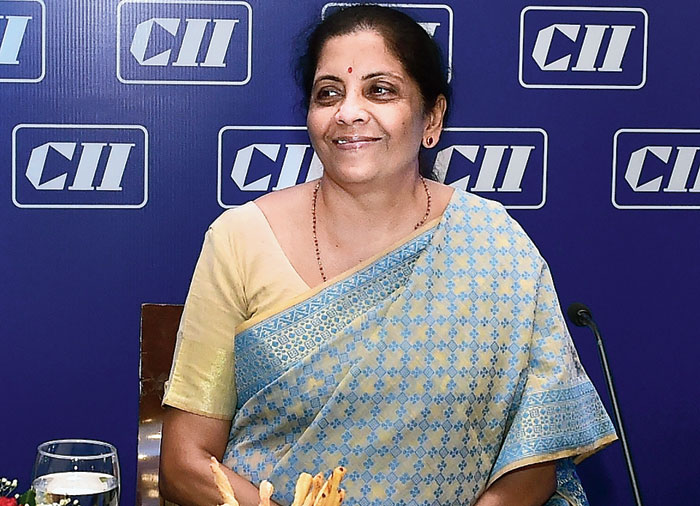 In the morning, Sitharaman met industry shoguns where she tried to soothe concerns about tax raids against certain businessmen which has fanned fears of vengeful attacks against those who have the courage to speak their minds.
PTI
Our Special Correspondent   |   New Delhi   |   Published 09.08.19, 09:29 PM

A bouquet of unpalatable economic factors caught up with finance minister Nirmala Sitharaman on Friday.

Growth in the manufacturing sector slowed to 1.2 per cent against 6.9 per cent a year ago.

In the morning, Sitharaman met industry shoguns where she tried to soothe concerns about tax raids against certain businessmen which has fanned fears of vengeful attacks against those who have the courage to speak their minds.

The Modi government has been clearly rattled by India Inc’s rumbles of disappointment with the Sitharman’s budget on July 5 that provided no incentives to industry or tax breaks to the markets that would boost confidence in its ability to arrest the worst economic slowdown in the past five years.

At the CII national council meeting, the finance minister said that starting next week, she would meet businessmen in different parts of the country to discuss issues relating to tax harassment and redress grievances on the spot.

She said a technology-based platform was being set up so that she herself could look into incidents of tax harassment.

The finance minister also assured the industry that the government would review the penal provisions introduced through an amendment in the Companies Act that provides for a fine of up to Rs 25 lakh and three-year imprisonment of top officials of a company that fails to meet its obligation to spend 3 per cent of its net profits on corporate social responsibility (CSR) projects.

“Our intention is not to criminally prosecute anybody,” she said about the amendment that has caused a lot of heartburn in industry.

The Companies (Amendment) Bill 2019, which has been signed into law by the President on July 31, proposes that any unspent annual CSR funds should be transferred to a specified government fund within six months of the financial year.

In the case of ongoing CSR projects, businesses have three years to use the funds allocated in a given year.

“Sitharaman mentioned that she would review the provision on criminal penal provisions. She said CSR notices with retrospective effect ‘were unacceptable’ and she will put a stop to these notices,” the CII said in a statement.

To help small businesses, the government will expeditiously clear all their dues except in cases where there are disputes, the industry chamber said. Delayed payment to MSMEs is estimated at around Rs 48,000 crore.

The government is under pressure to announce measures to shore up the fortunes of the automobile industry and the housing sector which have been battered by the slowdown.

“We are looking at simplification of taxes,” she said, adding that the report of the Committee on Direct Taxes Code is expected to be released on August 15. The government will immediately take this up for consideration.

Sitharaman said the Reserve Bank of India and the government were on the “same page” and making efforts to boost the economy.