They are waging a war against India as their pamphlet, their brochures say that, says defence minister who was once involved in student politics in JNU 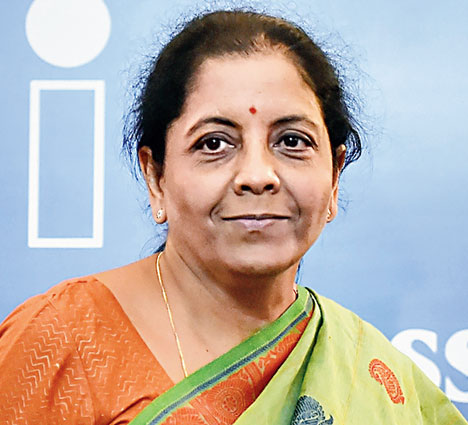 New Delhi: Defence minister Nirmala Sitharaman, who had been involved in student politics as a JNU student, has called "anti-India" the forces leading the union at the university.

Askedat an interaction on Tuesday with journalists at the Indian Women's Press Corps about the poll-related clashes at JNU, Sitharaman, who had been an activist of the now-defunct Free Thinkers, said: "I feel sad for so many things which are happening there. Election time arguments and, you know, disputes are normal, but the kind of things which have happened in the last few years are not really encouraging at all.

"It's very different to have a party whose ideology you may not agree with, but the way in which they have probably got led by forces which are anti-India - when I say anti-India definitely stated position - they are waging a war against India as their pamphlet, their brochures say that.

"Such people leading the JNUSU or JNUSU members openly participating with such forces, you don't need to hesitate to say 'anti-India' therefore. If forces which are waging a war against India and it is they who are also seen with the students union's elected representatives, that makes me feel uneasy."

The Left swept the JNU students' union (JNUSU) polls on Sunday for a third consecutive time. The Akhil Bharatiya Vidyarthi Parishad, which is affiliated to the RSS, the ideological parent of the BJP to which Sitharaman belongs, drew a blank. Activists of Left groups and the ABVP have been injured in poll-related clashes and police have filed five FIRs.

Sitharaman had studied economics at JNU in the 80s, and gheraoed then vice-chancellor P.N. Shrivastava in 1983 as an activist of the Free Thinkers to protest disciplinary action against a student. The university had been temporarily closed because of the agitation.

Late on Tuesday night, the JNUSU issued a statement demanding that Sitharaman withdraw her comments and apologise.

"The JNUSU is deeply dismayed by the statements made by Union minister and... JNU alumnus, Nirmala Sitharaman," the statement said.

"As a former student of this university and as a senior minister, such statements calling JNUSU members anti-India and 'waging a war against India' is utterly baseless and condemnable," it added.

"Time and again the imagined category of 'anti-national' has been invoked by the ruling dispensation to malign and clamp down on voices of resistance..." the JNUSU said.

JNUSU president N. Sai Balaji said: "We are tired of replying to these unsubstantiated allegations. In two years, the police have not filed a chargesheet in the sedition case against former JNUSU president Kanhaiya Kumar and others."

Balaji was among the students allegedly attacked by the ABVP.

He said Sitharaman needed to answer the questions being posed to her on the Rafale deal - "on why we are buying these aircraft at a much higher rate than previously agreed upon, and why the contract has been given to Reliance, which does not manufacture aircraft, and not Hindustan Aeronautics Limited, which would have provided thousands of jobs to unemployed Indian youths".

"We see her allegations as a strategy to divert the attention of the public from this loot of national wealth, and jobs, as well as promoting institutes like the non-existent Jio University which make education inaccessible to the poor," Balaji added.

In 2016, after complaints by the ABVP and BJP parliamentarian Maheish Giri, police had arrested Kanhaiya and two others on the charge of sedition for slogans raised during an event to commemorate the third anniversary of the execution of Parliament attack convict Afzal Guru.

They are out on bail, and a magisterial probe found several videos telecast on TV, on which the case is based, to have been doctored.

The names of non-ABVP students found guilty of indiscipline in that case had been read out by then human resource development minister Smriti Irani in Parliament.

Delhi High Court has set aside the punishments handed to these students, calling them "illegal, irrational and irregular".

Union home minister Rajnath Singh had alleged in 2016 that the Afzal event had the support of the Lashkar-e-Toiba founder Hafiz Saeed. Neither did Singh then, nor Sitharaman on Tuesday, substantiate the allegations they levelled. The CPM headquarters had been vandalised after Rajnath's comments.

After the polls on Sunday, the JNU administration banned all gatherings on the campus, stopped the entry of guests to hostels and closed dhabas.

Registrar Pramod Kumar has in a statement expressed "anguish" over "certain statements made on social media" by JNUSU office-bearers.

The JNUSU have called his comments "absurd". The teachers' association has accused the university administration of complicity in "the systematic targeting of JNU". Students are holding night vigils and have started running makeshift dhabas to protest the curbs.

On Tuesday, the ABVP held a news conference with its injured cadres in bandages.

One of its members, Susheel Kumar - a disabled student - was brought in a stretcher from the All India Institute of Medical Sciences to the Press Club of India, a catheter attached to the back of his palm.

In a statement the ABVP demanded: "The JNU administration, in concert with the police administration, (must) begin combing operations on the JNU campuses and all hostels and messes to rid the university of Naxals/Maoists/illegal Left-linked suspicious and violent elements."