Advertisement
Home / India / Never aspired to be President, won't become a dissident: Naidu at his farewell

Never aspired to be President, won't become a dissident: Naidu at his farewell

'My wish is parliament functions well. There are many members who are good speakers and when the opportunity comes, I see new members coming prepared' 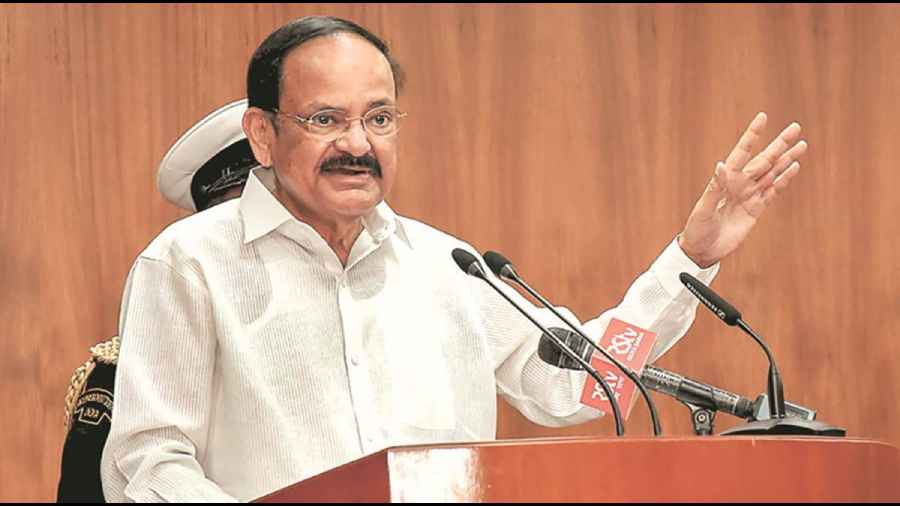 Outgoing Rajya Sabha Chairman M Venkaiah Naidu on Monday said he never aspired to be the President and will not turn into a "dissident", but will continue to remain connected with people and interact with them.

In his farewell speech, Naidu, who has often expressed unhappiness over frequent stalling of proceedings, said people expect Parliament to discuss, debate and not disrupt. The Vice President appealed to members to observe "decency, dignity and decorum" to maintain the image and respect of the house.

"The normal feeling about politicians...Respect is declining everywhere and this is because the value systems are declining. Keep that in mind and try to do your bit," he said advising parliamentarians to follow high standards.

Talking about speculation that he aspired to become the President, Naidu made it clear, "I am not of that type, people now often talk - either president, otherwise dissident or a resident. I am not going to do all these three."

"I would not get into politics. We are all working on our way, we are not enemies, we are rivals," Naidu said.

Naidu, in his around 10-minute speech, said Rajya Sabha has "greater responsibilities" being the upper house.

"People want the house to discuss, debate and decide - 3D's. They do not want the other D, that is disruption," said Naidu, who is known for his witty and rhyming comments since his days in the BJP.

"My wish is parliament functions well. There are many members who are good speakers and when the opportunity comes, I see new members coming prepared.

''Now the students, rural folks and people from other segments are watching parliament proceedings.

"That is why sometimes, I have to intervene and have to be strict and also have to take not a very happy decision of naming some people. Otherwise, I have no enjoyment to take such extreme actions," he said.

Naidu said he ha" no ill will against anybody or any party from the day he occupied the chair.

However, he also said he had tears in his eyes when he resigned from BJP with a "heavy heart", a party he belonged to after his name was announced for the post of Vice President after the BJP parliamentary board meetings.

"There were tears for not shirking the responsibility but because I have to leave the party, which has given me all these. That was the occasion," he said.

"I might not have given enough time as they wanted, but each one of you has been given time, whether it is Zero Hour, special mention, question hour or discussion and debate on the bills," he added.

Members cutting across party lines bade farewell to Naidu in Rajya Sabha, lauding his role as its chairman and recollecting how he inspired and allowed them to speak in their native languages.

While some Opposition members urged him to pen an autobiography, Leader of Opposition in Rajya Sabha Mallikarjun Kharge appreciated how Naidu functioned despite being "under pressure".

Noting that the productivity of the House increased under Naidu, Prime Minister Narendra Modi said the outgoing chairman encouraged dialogue and his legacy will continue to guide his successors.

Naidu, whose tensure end of August 10, will be succeeded by Jagdeep Dhankhar.

Speaking during Naidu's farewell, Rajya Sabha Deputy Chairman Harivansh hailed his journey from a village in Andhra Pradesh to the second highest post of the country.

Naidu had started his struggle for change in his student life.

"It would have been very difficult to carry out my responsibilities as Deputy Chairman without your guidance support advice and encouragement...The Chairman supported me at all critical moments and it was a privilege to work with you," said Singh.

Naidu has good managerial skills to run the house and during his tenure in 2020, Rajya Sabha's productivity was highest at 82.27 per cent.

Goyal said Naidu always encouraged the new members in the house. He delivered his maiden speech after his encouragement in the house over the Securities and Insurance Laws (Amendment and Validation) Bill 2010, which was introduced by the then Finance Minister Pranab Mukherjee.