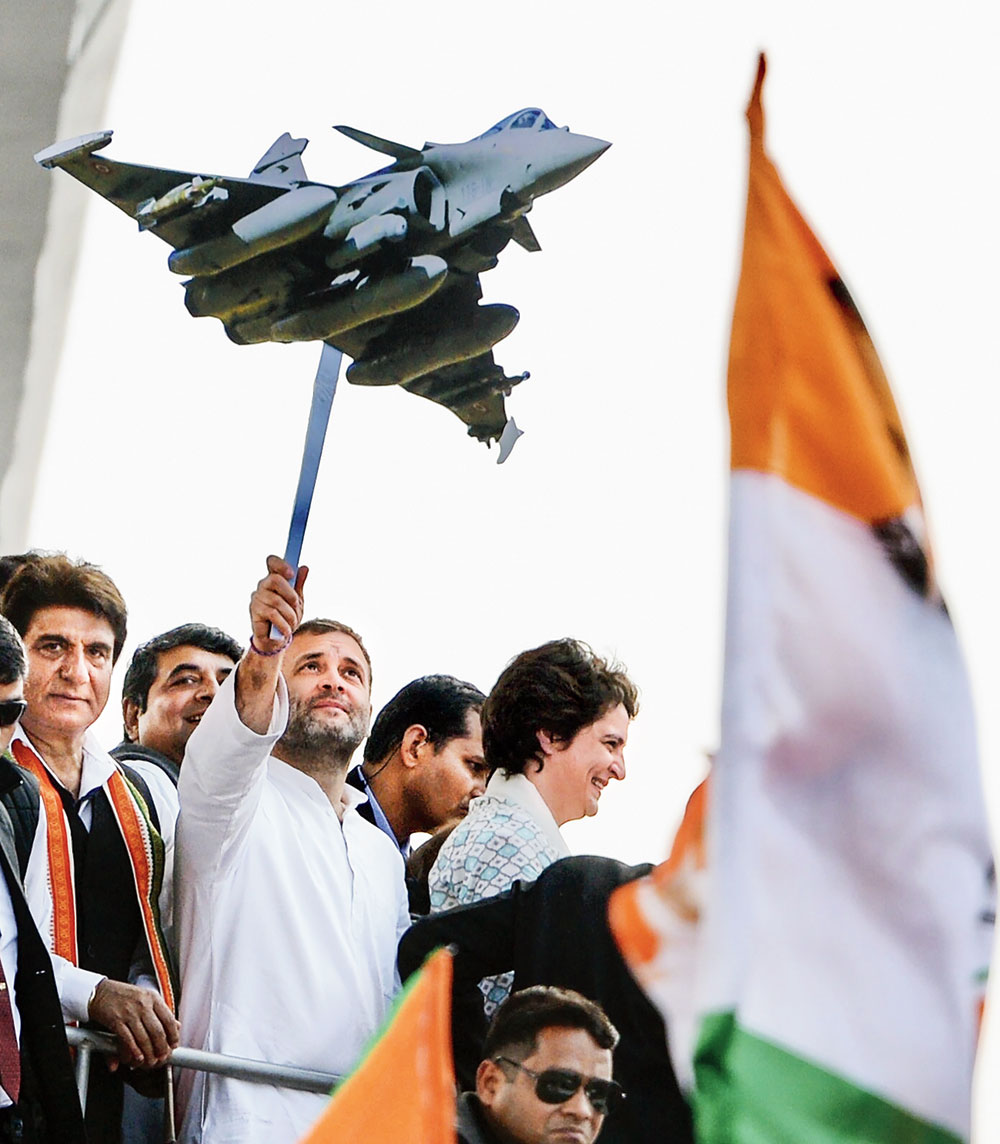 The Congress on Monday highlighted a media report on how the Narendra Modi government had removed provisions for anti-corruption penalties from the Rafale deal, alleging this suggested “corruption” in the agreement.

It hoped the Supreme Court would take note of “key facts” that the Centre had allegedly withheld from it during the Rafale hearing, prompting it to dismiss petitions seeking a court-monitored probe into the deal.

Congress spokesperson Manish Tewari was referring to a report in The Hindu newspaper about “unprecedented concessions” the government had granted to Rafale maker Dassault and missile systems developer MBDA France by removing anti-corruption clauses.

“Why would any government do this? The only reason could be — they are nervous, petrified because corruption happened,” he said.

The Hindu report says: “The high-level political intervention meant that standard defence procurement procedure (DPP) clauses on ‘penalty for use of undue influence, agents/ agency commission, and access to company accounts’ of Dassault Aviation and MBDA France were dropped by the Indian government in the supply protocols…. Dassault is the supplier of the Rafale aircraft package while MBDA France is the supplier of the weapons package to the Indian Air Force.”

It adds: “It is significant that neither this nor other important information published by The Hindu on the ‘parallel negotiations’ conducted by the Prime Minister’s Office and the national security adviser seems to have found a place in the material submitted by the government to the Supreme Court….”

Rahul Gandhi led the Congress in attacking the government, saying its objective was to forestall legal fallouts.

“NoMo anti-corruption clause. The Chowkidar himself opened the door to allow Anil Ambani to steal 30,000 crore from the IAF,” the Congress president tweeted.

“NoMo” is a take-off of Modi’s official nickname of “NaMo” and has been coined to stress that he is wanted “no more”.

During the 2014 campaign, Modi had styled himself as a “chowkidar” (watchman) come to guard against corruption. The Congress, which alleges he unilaterally wangled the Rafale offset contract for Anil Ambani’s Reliance at the expense of the public-sector HAL, has coined the slogan: “Chowkidar chor hai (The watchman is a thief).”

Later, at the venue where Andhra Pradesh chief minister Chandrababu is fasting to press for special status for his state, Rahul took further digs at Modi.

“The Prime Minister became Prime Minister by saying he is going to fight corruption. Have you read The Hindu newspaper today? Rafale, Chowkidar…” he paused hearing the chants of “chor, chor….”

“Exactly, ‘chowkidar chor hai’,” Rahul continued. “The Prime Minister has stolen from the people of Andhra Pradesh and given that money to Anil Ambani.”

The report in The Hindu said that even the clause for making payments through an escrow account had been dropped just days before the signing of the inter-governmental agreement.

“Clauses on the penalty for use of undue influence, agents/ agency commission, and access to company accounts of Dassault Aviation and MBDA France were dropped. This absolutely blows the credentials of Modi government,” Tewari said.

“What changed between August 24, 2016, and September 23, 2016, that in 30 days the Defence Acquisition Council overrides the decision of the CCS (cabinet committee on security)? The anti-corruption clauses are an integral part of the Defence Procurement Procedure.”

Tewari added: “Who paid whom (during) these 30 days to ensure these clauses were dropped? What are the implications of this? It indemnifies the French and Dassault. Tomorrow, if any evidence (of corruption) is found, there will be no provision in the agreement that can lead to cancellation. The end-beneficiaries are indemnified. Was the government nervous that the smoking gun will eventually lead to their undoing?”

He asked why a government would not want to secure the advance it had paid.

“It was the PMO which ran a parallel negotiation, did it by undermining the defence ministry. There is a case of overt malfeasance and it is clear the French were in the driving seat of the bargain(ing) despite India being the buyer,” Tewari said.

“If the comptroller and auditor general of India ignores these facts, its report will not be worth the paper it is written on.”

The CAG will submit its report on Rafale to Parliament on Tuesday.

Tewari was asked what the value of the December 14 Supreme Court judgment was in the light of the latest revelations.

“It is obvious these vital facts were hidden from the Supreme Court. There was clearly a deliberate attempt by the government to mislead the court, or to be economical with the truth,” Tewari said.

“We hope the Supreme Court will take note of these facts when it lists the clarificatory application.”

Former finance minister P. Chidambaram castigated the government in a series of tweets.

“The Rafale deal is unravelling faster than the government thought. First, it was the loading of the India Specific Enhancement costs on 36 aircraft instead of 126 aircraft giving a bonanza to Dassault. Then it was the revelation that ‘parallel negotiations’ were being carried on by PMO undermining the efforts of the Indan Negotiating Team,” he posted.

“Now it is revealed that crucial changes were made to the clauses in the standard Defence Procurement Procedure. No sovereign guarantee, no bank guarantee, no escrow account, yet a huge amount was paid as advance. No penalty clause for undue influence, no clause against agency commission, no clause for access to suppliers’ accounts and Dassault goes laughing all the way to the bank.”

Modi a ‘thief’. No other word will do: Rahul