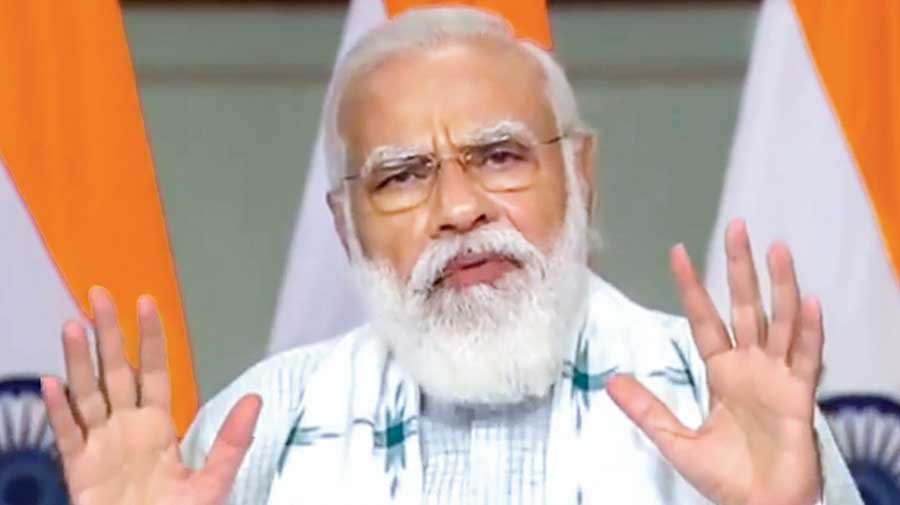 Faced with objections that the National Education Policy is too restrictive of the states’ autonomy, Prime Minister Narendra Modi on Monday sought “maximum flexibility” — from the critics.

Modi said the NEP gives students “flexibility” in choosing subjects and therefore all stakeholders should show the “maximum flexibility” in implementing it.

He seemed to be suggesting that state governments critical of the policy should drop their objections and implement the policy in toto.

Modi termed the NEP a policy of the country and not of “those in power” as he addressed a conference of governors — the chancellors of state universities — on the policy’s implementation.

“We have to together solve all concerns and apprehensions. We will have to show maximum flexibility in implementing the policy,” Modi said.

As examples of the “flexibility” accorded to students, Modi referred to the options for vocational education from Class VI and for cross-stream selection of subjects in the upper classes and in higher education.

Among the policy’s other highlights are the integration of pre-school with formal schooling at government schools (it’s already there in many private schools), syllabus reduction for schoolchildren, a single regulator for higher education, and funding for private institutions.

Many states — among them Tamil Nadu, ruled by BJP ally AIADMK — and NGOs have expressed fear that the NEP would curb the states’ and institutions’ autonomy, promote privatisation, reduce education to skills training and hit the state governments’ pockets.

At the conference, President Ram Nath Kovind too appealed for cooperation between the states and the Centre on the implementation of the NEP, which the government says has become effective.

“Education is on the concurrent list. The NEP’s success will depend on effective coordination between the states and the Centre,” he said.

Kovind advised the governors to have virtual conferences on NEP implementation with universities in their states.

Currently, government-run pre-schooling is done at the anganwadi centres, which is cheaper because their employees are paid far less than schoolteachers. Besides, these centres will continue functioning even after pre-school moves to the schools because they have a role in the nutrition of newborns and their mothers.

Bengal education minister Partha Chatterjee complained last month that neither the states nor Parliament had been consulted before the policy was approved on July 29. Some two dozen civil society organisations too have underlined the lack of discussions with stakeholders.

The All India Forum for Right to Education (AIFRTE), Andhra Pradesh teachers’ federation, the Joint Forum for Movement on Education and others have issued a joint statement saying the NEP would reduce learning to skill training in the name of vocational education.

“It’s wrong to introduce skill training (as early as) Class VI. This is a violation of the child labour law, which prohibits the employment of children below 14 in any profession,” said Madhu Prasad, a professor and member of the AIFRTE.

She feared the provision of funding for private institutions was intended at promoting privatisation of education.

Prasad also had apprehensions about the proposal for an overarching Higher Education Commission of India, whose various arms will include a single higher education regulator (the National Higher Education Regulatory Council), an accrediting body and a funding body.

She said this would pave the way for the centralisation of higher education, allowing the Union government to curb the academic autonomy of universities and the states and push the ruling party’s political agendas through the education apparatus.

Current general-stream regulator University Grants Council is largely an advisory body whose recommendations are not binding on the institutions and the states, but the proposed HECI’s powers remain opaque.