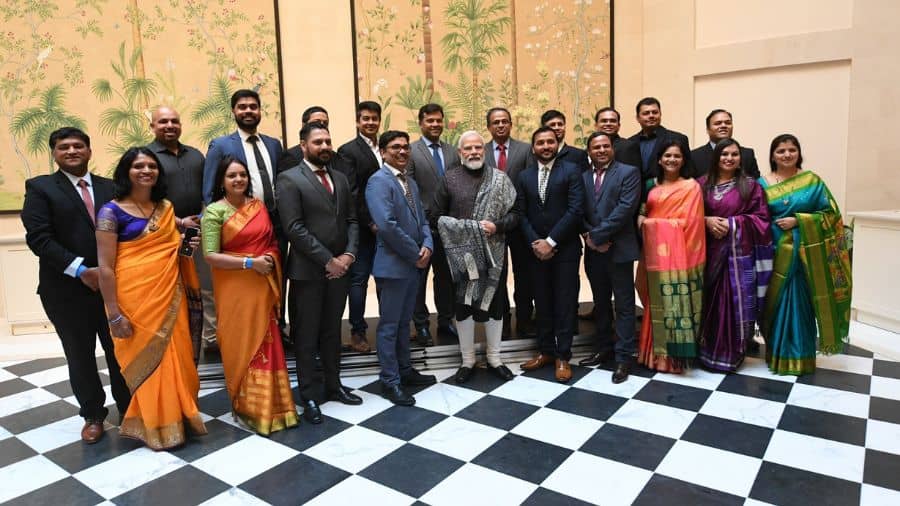 Prime Minister Narendra Modi said on Monday that a new resurgent India had made up its mind to move forward with determination and urged the Indian diaspora to help the country take big strides globally.

Addressing the Indian community here, Modi said the young and aspirational India understood the need for political stability to achieve faster development and had ended three decades of instability by mere touch of a button.

"This time of the 21st century is very important for India. Today's India has made up its mind, it is moving ahead with determination. When the country makes a resolve, then that country walks on new paths and shows it by achieving desired goals, Modi said.

The Prime Minister's hour-long address to the Indian community was peppered with slogans of Bharat Mata ki Jai', Modi hai toh mumkin hai' and 2024, Modi Once More' by the ecstatic crowd gathered at the Theater Am Postdamer Platz here.

More than 1600 members of the Indian community in Germany comprising students, researchers and professionals participated in the event.

Modi said that before 2014, India was a work in progress", but over the past eight years the country has been making rapid strides in every sector ease of living, quality of life, ease of employment, quality of education, ease of doing business, quality of travel, quality of products.

India was rapidly working towards progress in every sector and achieving new landmarks on that journey, he said.

New India now does not think about a secure future, but is ready to take risks, ready to innovate and incubate. India, which had 200-400 start-ups around 2014, today is home to 68,000 start ups and dozens of unicorns some of whom have already become deca-corns with 10 billion dollars valuation, Modi said.

The Prime Minister said that at a time when the world was facing a shortage of wheat, the farmers of India have stepped in to feed the world.

"Whenever humanity is faced with a crisis, India comes up with a solution. This is New India, this is the strength of New India, he said.

The Prime Minister urged the Indian diaspora to help him take the India story global.

"There was a time when registering a business was a hassle. Today it takes only 24 hours to register your company. This is restoring people's confidence in governance, he said.

The Prime Minister said his government has eradicated more than 25,000 compliances and scrapped 1,500 laws to unburden our citizens.

In an apparent dig at the Congress, Modi said that now no prime minister will have to lament that he sends one rupee, but only 15 paise reaches the intended beneficiary.

"Woh kaunsa panja tha jo 85 paise ghis leta tha (which palm was it that used to take away 85 paise), he quipped.

He said in the last eight years, his government has transferred more than Rs 22 lakh crore to beneficiaries through direct benefit transfer.

In an apparent reference to the removal of Article 370 that granted special status to Jammu and Kashmir, Modi said the country was one, but had two Constitutions.

"But, why did it take long to make it one (constitution). It took seven decades to ensure that the country had one constitution. We have implemented it now, Modi said.

Prime Minister Narendra Modi on Monday highlighted the reforms undertaken by his government as he interacted with Indian and German business leaders, urging them to invest in India's youth.

Modi, who arrived here on Monday morning on the first leg of his three-nation Europe trip, co-chaired a business round table with German Chancellor Olaf Scholz.

"Prime Minister emphasised on the broad-based reforms carried out by the government and highlighted the growing numbers of start-ups and unicorns in India," the Ministry of External Affairs said in a press release.

He invited the business leaders to invest in India's youth.

The event saw participation of top representatives from the governments and selected CEOs from both sides, who engaged in discussions on topics ranging from climate cooperation; supply chains; research and development.

Meanwhile in a tweet, the Ministry of External Affairs said: "Building on our business ties. PM @narendramodi and @Bundeskanzler Olaf Scholz interact with top executives from German and Indian companies. Discuss ways to further the vigour and vitality of the Indo-German economic and commercial partnership."

Earlier, addressing a joint press event with Scholz after co-chairing the 6th inter-governmental consultations between the two nations, Modi said India was concerned over the humanitarian impact of the conflict and had provided aid to Ukraine.