Advertisement
Home / India / Name Droupadi was given by my teacher: President Murmu

Name Droupadi was given by my teacher: President Murmu 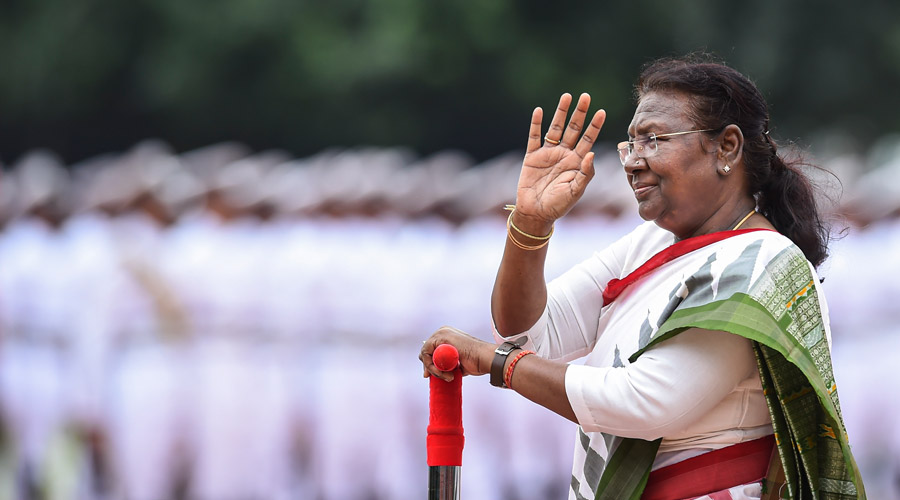 The first tribal President of India's name Droupadi, based on a character of the epic Mahabharata' was given by her school teacher.

In an interview with an Odia video magazine some time ago, she revealed that her Santhali name Puti was changed to Droupadi by a teacher in school.

Droupadi was not my original name. It was given by my teacher who hailed from another district, not from my native Mayurbhanj, Murmu told the magazine.

Teachers in the tribal-dominated Mayurbanjh district used to travel from either Balasore or Cuttack in the 1960s, she claimed.

The teacher did not like my previous name and changed it for good, she said when the magazine asked why she is called Droupadi, a name similar to the Mahabharata' character.

She had also mentioned that her name was changed several times - from Durpadi to Dorpdi .

She stated that names do not die in Santhali culture.

If a girl is born, she takes the name of her grandmother, while a son carries grandfather's nomenclature, she said.

Droupadi, who had the surname of Tudu in schools and colleges, started using the title Murmu after she married Shyam Charan Tudu, a bank officer.

Murmu on Monday took oath as the 15th President of India.

Much before getting elected to the country's highest Constitutional post, Murmu had made her views clear on the reservation for women in politics.

There must be reservation for women in politics dominated by men. The political parties can change this situation as they choose candidates and distribute tickets to contest elections, she told the magazine.

Murmu, however, said women should focus on qualitative politics and raise their voices for empowerment in Parliament or state assemblies.

The women must strengthen their qualitative acumen by highlighting peoples' problems at the right forums, she had said.

In another interview with Brahmakumari Godlywood Studio on February 18, 2020, Murmu narrated her ordeal after the death of her 25-year-old eldest son Laxman.

I was completely shattered and broken following the death of my son. I was depressed for about two months. I stopped meeting people and remained confined at home. Later I joined Ishwariya Prajapati Brahmakumari, underwent yoga and meditation, she said.

The 15th President of India lost her younger son Sipun in a road accident in 2013 and subsequently, her brother and mother passed away.

I have encountered tsunami in my life and seen three deaths of my family members in a span of six months, Murmu said, adding that her husband Shyam Charan also fell ill and died in 2014.

Murmu also said sorrow and happiness have their own space in life.