Advertisement
Home / India / Mr Shah, how many jails will you build?

Mr Shah, how many jails will you build?

On Tuesday, Shah had ruled out a rethink on the amended citizenship law and the NRC 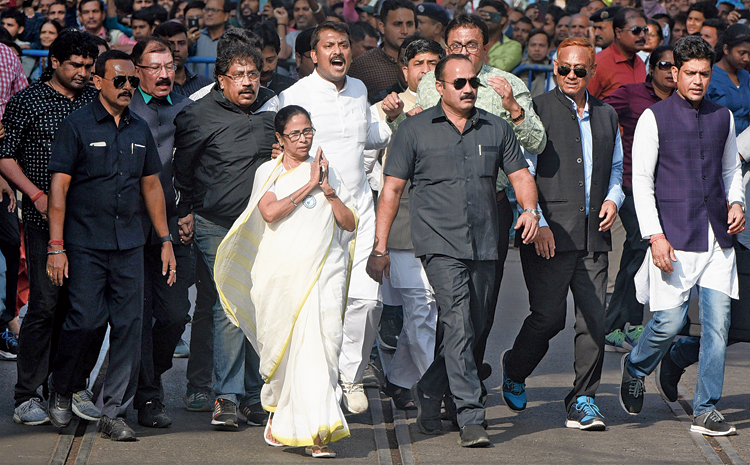 Chief minister Mamata Banerjee on Wednesday reminded Amit Shah that he was Union home minister and his job was not to set the nation afire but to douse the flames, reeling out a volley of questions.

“I feel ashamed (of Shah’s remarks)…. I would like to appeal to the Government of India, to the Union home minister. Manyobawreshu, sroddhabhajon (His Excellency, most revered), please remember a little that you are the Union home minister,” the Trinamul Congress chief said at the end of her third march in as many days against the amended citizenship law and the National Register of Citizens (NRC).

The following are some of the questions Mamata addressed to Shah while she was speaking to thousands at Dorina Crossing in Esplanade.

•Why are you saying ‘hogahi hoga (happen it certainly will)’ when there are protests in several parts of the country? Assam…, Tripura, Delhi, Punjab, Uttar Pradesh, Rajasthan…? Kya hoga (What will happen)?

(On Tuesday, Shah had ruled out a rethink on the amended citizenship law and the NRC.)

⚫ Why are you saying Aadhaar card nahi chalega (will not do)? Toh banaya kyun (then why did you get it done)? Are the cats now coming out of the bag?

I am still not saying you said it, I am seeking a clarification from you, did you really say these things (in an interview on Tuesday)? As a citizen of this country, I have the right, the prerogative to ask you, when a country’s home minister says openly, publicly, Aadhaar won’t do…. Why then did you spend Rs 6,000 crore in the name of Aadhaar? If Aadhaar won’t do, then why did you make people link it to phones, to banks, to passports…. If Aadhaar won’t do, why did you harass the people?

⚫ PAN won’t do, he said. Why then are you taking income tax?

⚫ He said even (inclusion in) voter list won’t do. How then did you become Union home minister? Because the voters are on that list. That is why your government exists, mine too. Now you say it won’t do?

⚫ What had you said? Nobody’s citizenship will go. A few people here and there, those who came from outside, we will get theirs done. If that is true, then why none of these documents will do, that democracy won’t do? You think something else, say something else….

⚫ You are saying shoot to kill? What is this? Does that happen in a democracy? (A Union minister was quoted as saying on Tuesday that protesters found damaging public property should be shot on sight.)

⚫ If your mission was ‘sabka saath, sabka vikas’, why did you let go of some hands? You carried out sabka satyanash.

⚫ A chattan, a rock, are you? Then, we are the mice that will keep chipping away at the base of the rock, till it all comes crumbling down. (Shah had said he was standing firm as a rock on the amended citizenship law.)