Over a hundred still remain missing as rescue operations intensify 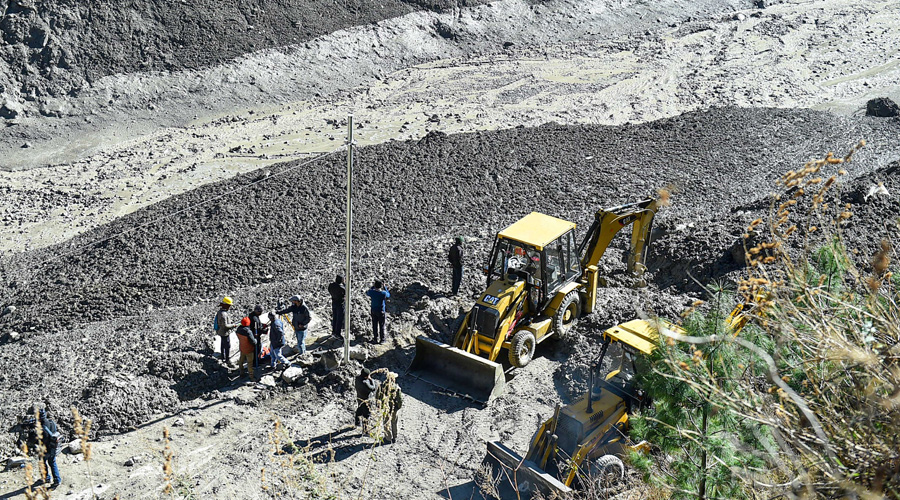 Rescue teams have been battling against odds to reach out to the trapped people at the site of the flood-ravaged Tapovan-Vishnugad hydel project.
File picture
Our Bureau, Agencies   |   Dehradun   |   Published 14.02.21, 10:15 AM

Eight bodies were recovered on Sunday from the flash flood-ravaged hydel project sites in Tapovan and Raini of Uttarakhand's Chamoli district, taking the toll in the calamity to 46, even as search and rescue operations were intensified.

The recoveries take the toll in the disaster to 46, while 158 people remain missing, officials said.

The bodies have been kept at a temporary mortuary built in Tapovan, they added.

Two of the bodies have been identified. One hails from Narendra Nagar in Tehri district and another from Kalsi in Dehradun district, Chamoli District Magistrate Swati S Bhadauria said.

She said a helicopter has been kept ready at the site to provide medical help to survivors, if any.

The NTPC's Tapovan-Vishnugad hydel project had suffered extensive damage in the flash flood, which also demolished the Rishiganga hydel project.

Rescue teams continued widening a hole into the Silt Flushing Tunnel at the project site in Tapovan where around 30 people are believed to be trapped.

Rescuers had said on Saturday that they were still hopeful of finding survivors, notwithstanding the numerous challenges like the muck and the water from Dhauli Ganga constantly flowing into the tunnels.The river had deviated from its path after the flash floods leaving 166 missing.

The State Emergency Operation Centre here had said that scientists of the Indian Institute of Remote Sensing during an aerial survey of the Rishi Ganga found that the glacial lake formed due to the avalanche over it has begun to release water, which reduces chances of it breaching or causing a fresh flash flood during the rescue operations.

The lake is at the confluence of Raunthi Gad and Rishi Ganga.

According to Central Water Commission (CWC) chairman Saumitra Haldar, it is 400 metres in length, 25 metres wide and 60 metres deep.

The CWC is examining possibilities of what can be done if the water rises to a "critical" level. It is conducting simulation studies and also examining the possibility of carrying out a controlled blast to drain out the water.

P K Tiwari, Commandant of the National Disaster Response Force, had said that based on their experience, they are optimistic about saving lives and mentioned the possible presence of air ducts and gaps in the tunnel.

So far, 20 bodies and 12 human limbs have been cremated after DNA sampling, the DM said.

A compensation of Rs 4 lakh each was also paid to the kin of five victims of the calamity from Dehradun, Bageshwar and Haridwar districts of Uttarakhand and Lakhimpur Kheri and Aligarh districts of neighbouring Uttar Pradesh.