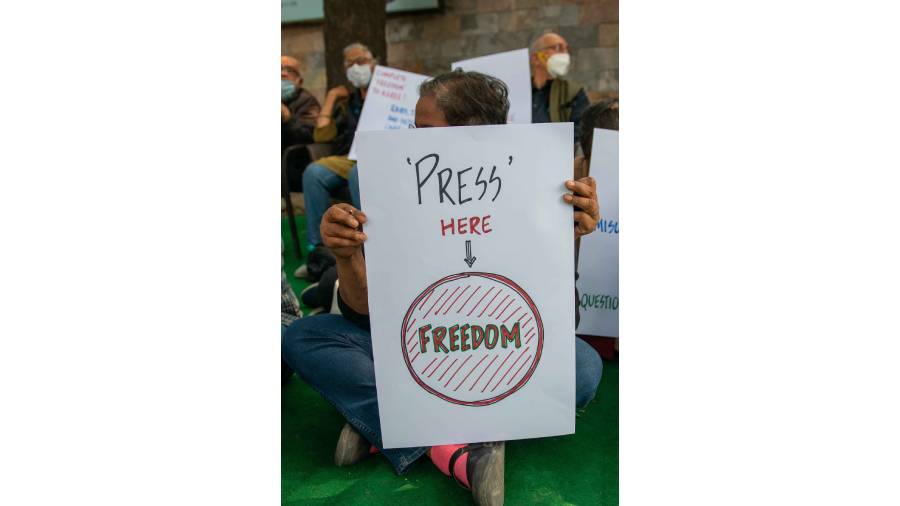 A few years after Narendra Modi ascended to power, some Congress leaders from the Emergency era would privately quip that Indira Gandhi was naive to have invoked Article 352 of the Constitution in 1975; Modi had shown how dictatorial stranglehold could be achieved without declaring an Emergency.

This was particularly true of the media which — barring a few exceptions — fell in line rather early in the day. Worse, influential sections of the media became force multipliers of the State and the ruling party’s ecosystem, taking the lead in hyper-nationalist propaganda, diverting attention from real issues, and launching witch-hunts of whoever the government wanted put in the doghouse. It’s probably a function of how dutifully it turns to the Establishment’s diktat that into the eighth year of Modi’s reign, much of the media continues to question the Opposition far more stringently than the government.

Even before he became premier, Modi had made dictation to media his house-style. He would only accept pre-scripted interviews with not one “out-of-the syllabus” question. Compliance was achieved not through overt imposition of restrictions but through covert means, without invoking the law. A phone call from the new Lutyens powers to an editor or a media magnate — and often to a big advertiser — and the job was done. Where persuasion didn’t work, threat, intimidation and brow-beating were employed. A recent case in point may well be the running battle the government has had with Twitter over compliance with recently framed guidelines that place liability on intermediary information platforms like Facebook, WhatsApp and Twitter. And, of course, there have been reams of regulation. Just this week, the government created a new three-tier statutory mechanism to oversee all television content and make it subject to consumer grievance, which can mean anyone can slap a complaint in the name of being aggrieved with content. Critics believe this is a thinly-veiled bid to enforce self-censorship — and censorship — on broadcasters.

For the most part, the government went after individual channels or publications. In the case of publications that did not toe the line, DAVP (directorate of advertising and visual publicity) advertisements were reduced to a minimal. For television news, a case that stands out is the order to NDTV India to stop airing for a day as punishment for reporting “strategically sensitive information” on the Pathankot terror attack. That the channel was singled out for not buckling to government pressure was evident as all other networks had shown similar stuff. In the wake of protests that drew eyeballs overseas too, the government blinked at the eleventh hour and withdrew the order. But each such attempt at bullying rang out like a signal to the rest of the media to “behave”.

The Modi regime is hyper-sensitive to criticism and unrelenting in countering it. It lets out what it wants to, and does not believe it is answerable. Modi’s PMO has no spokesperson. He travels only with handpicked official mediapersons tutored to receive and relay only what Modi wishes relayed. The Prime Minister has not held a single press conference in his two tenures and never fielded questions. Access to power and information has become directly proportional to compliance.


The Modi regime is hyper-sensitive to criticism and unrelenting in countering it. It lets out what it wants to, and does not believe it is answerable.
-


Speaking in his individual capacity, journalist Sanjay Kapoor — who is also secretary of the Editors Guild of India — said: “This government views any criticism as an act of dissent. It’s a government that spends all the time managing the narrative, so where is the space for free press? They use trolls to shut up critical voices on social media. Some newspaper groups that levelled charges of corruption against the government found their advertising stopped. Like many activists, mediapersons, too, face charges of sedition.” Over the last year itself, the Editors Guild of India has had to issue a slew of statements protesting unjust action against journalists by government agencies.

The first term of the Modi government saw the manifold expansion of social media usage, turning everyone into a citizen journalist and providing the ruling dispensation multiple platforms to communicate directly to the people and even provide their own interpretation of all forms of criticism. The legacy media became just another player; the few that refused to subscribe to the government’s narrative lock, stock and barrel also suited the regime as they could be flaunted as evidence of media freedom.

What remained an irritant for the government was the slew of digital news portals that have emerged over the past decade. Though the content of these websites is also subject to restrictions governing television news channels and newspapers, they did not require permission to start operations. In the case of television news, government permission is required and newspapers have to register with the 1867 vintage Press and Registration of Books Act.

In the name of creating a level playing field, the government first put a 26 per cent cap on FDI for uploading/streaming of news and current affairs through digital media on the lines of print media. And, this February, the government notified The Information Technology (Intermediary Guidelines and Digital Media Ethics Code) Rules, 2021; it has drawn widespread criticism and been challenged in court. This has brought attention to the Indian media scenario like nothing else in the past because these rules affect big tech companies such as Google, Amazon, Facebook and Twitter.

Through these guidelines the government seeks to bring all forms of digital content providers and platforms — ranging from over-the-top (OTT) platforms like Netflix and Amazon to news websites and intermediaries like Twitter and Facebook — under a regulatory framework that makes the State a super cop of sorts.

The government has sought to project these regulations as a “soft touch oversight mechanism’’ and harps on the need to create a level playing field as online platforms of all genres had no regulatory framework. Digi-pub News India Foundation, an association of digital publications of news and current affairs formed last year, has contested this pointing out that both print and electronic media have been fairly insulated from executive interference.

Last September, 15 OTT platforms had unveiled a self-regulation code to avoid being overseen by a government mechanism, but the information and broadcasting (I&B) ministry rejected it. Earlier in February itself, the I&B ministry notified the Press Council (Procedure for Notification of Associations of Persons) Rules, 2021, to invest more powers in the chairman; many in print media fear this could allow the government more elbow room in this regulatory mechanism.

“The regime may be using the same old laws and the system but there is a critical difference in that it is ideologically distinct from the past,’’ said a keen media watcher who did not want to be named. “The constant use of the nation and its security by this regime certainly signifies that all these are done in the cause of the nation. Indira Gandhi did begin it but the project was just in its nascent stage then and had not received acceptance among vast sections of the people. It does now and hence these tactics assume a distinct threat to freedom."

What is worse is that a template might have been set for future governments seeking to manipulate and muzzle the media, without having to take the blame of invoking draconian measures.